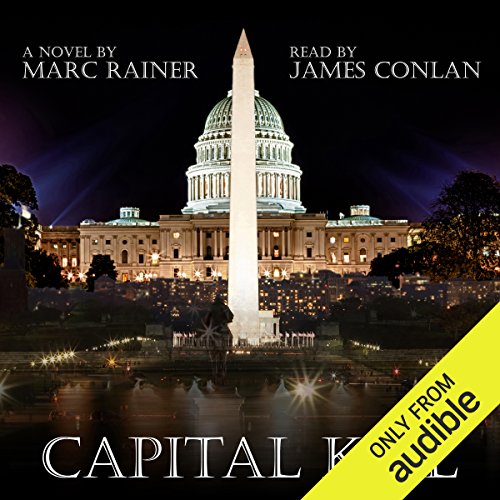 By: Marc Rainer
Narrated by: James Conlan
Try for $0.00

A few short blocks from the safety of the museums and monuments on the National Mall, a ruthless killer prowls the streets of Washington, D.C. Federal prosecutor Jeff Trask joins a team of FBI agents and police detectives as they try to solve the series of brutal murders. As the body count rises, the investigation leads to a chilling confrontation with the leader of an international drug smuggling ring, and no one is safe, not even the police.

Written by former Washington prosecutor Marc Rainer, Capital Kill is a swirling thrill ride through the labyrinth of a major federal investigation and trial, with a gripping conclusion that no one will see coming.

"Jeff Trask is an Assistant U.S. Attorney who becomes embroiled in a high-stakes international case.... Characters are well developed. The streets of Washington, D.C. come alive; those who have lived or worked in the nation's capital will recognize Rainer's cunning use of seedy locales to give the action in the book a realistic tone. Trask, an engaging main character, works to find out who is behind the heinous murders plaguing D.C. Despite being extremely intelligent, he comes across as an everyman. The book's intense action, realistic tone and memorable characters will keep readers engrossed in this thriller with a superb payoff." ( Kirkus Reviews)

What listeners say about Capital Kill

Good story, well written, interesting plot and showcases the benefit of the good guys working together

It was difficult keeping track of about 12 characters who all sounded alike. Even the women sounded a bit like the narrator. Then, the long discussions of non-related trivia was useless. Ok, the author knows things. But, they didn't relate to th story at all. I think with a bit of cleanup it would be a good story

Wow! What a surprising ending. It was intense and gripping. I can't wait to see what happens next in Trask's life and career.

I found the book very entertaining. The narrator did a fine job except for his ethnic accents. They were a bit cartoonish and need to be dialed back a bit. Overall, it was an enjoyable listen.

What disappointed you about Capital Kill?

The book was written as if for a child...or was it just the author thinking out loud? This could have been a really good book, but there was too much "explanation" in dialogue.

Nice twist. The ending wasn't a complete surprise, but I liked it.

Very poor attempts at accents, especially the Jamaican. Not much differentiation between character voices.

The book has good potential, and a re-write with less obvious content would make it much better. If one is new to legal thrillers, this may be a decent start.