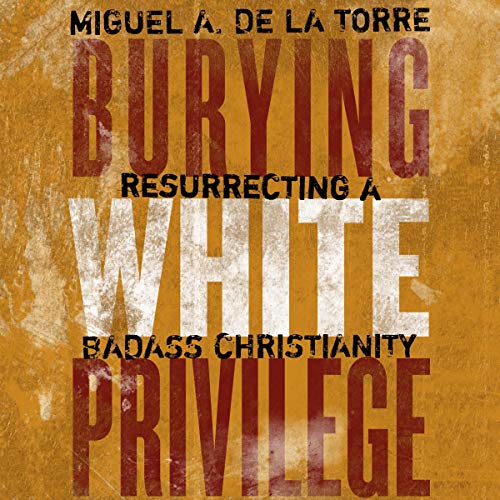 Short. Timely. Poignant. Pointed. Burying White Privilege is all of these and more. This is the book that everybody who cares about contemporary American Christianity will want to hear.

Many people wonder how white Christians could not only support Donald Trump for president but also rush to defend an accused child molester running for the US Senate. In a 2017 online essay that went viral, Miguel A. De La Torre boldly proclaimed the death of Christianity at the hands of white evangelical nationalists. He continues sounding the death knell in this book.

In Burying White Privilege De La Torre argues that centuries of oppression and greed have effectively ruined evangelical Christianity in the US. Believers and clerical leaders have killed it, choosing profits over prophets. Prophetically calling white Christians to repentance, De La Torre seeks to rescue the biblical Christ from the distorted Christ of white Christianity.

I agree and see clearly that American nationalist Christianity is destroying the true understanding of the gospel of Christ in America and driving many away from the faith. I was hoping to get a view of restoring biblical Christianity out of the morass of immorality and degradation that is portrayed by most of the religion people call Christianity in America today. A view to take the true gospel and apply it to current social issues, to speak for the oppressed and change attitudes of those who are blinded by the systemic oppression in America that opposes the gospel of Jesus. Unfortunately, the author is blinded by his own hate for the system and the rich that the gospel appears an afterthought only or just a tool to use in a fight against oppression. Actually, it’s not clear that the author even understands what the gospel is from what he says in this book. I painfully forced myself to listen to the entire audio book hoping to hear something, but I realized that the author was proposing just another system of religion that is no better. His cynical and mocking tone throughout will give those who hate more reason to hate, those who are prejudiced more reason to be prejudiced, like mocking “nailing power and privilege to the old rugged cross”. The author states “marginalized communities must call for disruption and social disorder... refusing to play by the rules established by those who wrote the rules" and likens it to Jesus overthrowing tables. So called bad ass Christianity “screws” with the social structures and that is the calling of a Christian. Really? Jesus who said His kingdom is not of this world.. The Christian is called to the important work of overcoming oppression and improving society with all of the abilities that God gives through love but the authors Christianity is no closer to Christianity than the American nationalist Christianity of today. It is hate and using Christianity for your own end, exactly like so many others. The author quotes Dr. Martin Luther King Jr. to try to gain some credibility, I think. I am glad I have King’s book “Strength to Love” to read after this to get a true understanding of where we should be going and true Christianity from a man with a tough mind but TENDER HEART. Do not waste your time on this book until you have read that one!