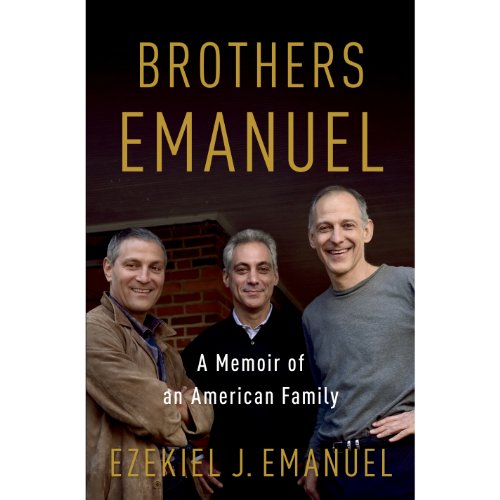 For years, people have been asking Ezekiel “Zeke” Emanuel, the brash, outspoken, and fiercely loyal eldest brother in the Emanuel clan, the same question: What did your mom put in the cereal? Middle brother Rahm is the mayor of Chicago, erstwhile White House chief of staff, and one of the most colorful figures in American politics. Youngest brother Ari is a Hollywood super-agent, the real-life model for the character of Ari Gold on the hit series Entourage. And Zeke himself, whom the other brothers consider to be the smartest of them all, is one of the world’s leading bioethicists and oncologists, and a former special advisor for health policy in the Obama administration. How did one family of modest means produce three such high-achieving kids? Here, for the first time, Zke provides the answer.

Set amid the tumult of Chicago in the 1960s and 1970s, Brothers Emanuel recounts the intertwined histories of these three rambunctious, hypercompetitive Jewish American boys, each with his own unique and compelling life story. But ultimately, this is the story of the entire Emanuel family: the tough, colorful Old World grandparents; a mischievous, loving father who immigrated to the United States with twenty-five dollars and who enthralled his boys with tales of his adventures in Israel’s war for independence; and a proud, politically engaged mother who took the boys with her to rallies and protests - including a civil rights march through the streets of Chicago led by Martin Luther King himself.

Even as the Emanuels distinguished themselves as individuals, the bond of brotherhood that tied them together was never broken. Brothers Emanuel is a wry, rollicking, and often poignant narrative of how one American family succeeded in raising three extraordinary children.

What listeners say about Brothers Emanuel

My late wife worked for Zeke in the 1990's when he was at Harvard and her description of him as very smart, very driven, very capable, and oblivious to his effect on others ring through the entire book. While Zeke did write the book, it is still too focused on his accomplishments and life and too little on that of his brothers.

IMHO, there is also too much blame heaped on his mother, who faced a very difficult chore of bringing up 3 ADHD boys in a small apartment in Chicago while her husband's mother lived with and despised her, and her husband worked long hours. Zeke could use a little more empathy.

I also would have liked to learn more about Rahm's and Ari's childhood. It appears that they were shaped quite differently by the family. Why? How did Ari's dyslexia affect him positively (rather than negatively as he is described as a pugnacious, fighter most of the time)?

Overall, the book is a good read and entertaining. But, it could have been much more is Zeke had taken the time to interview Rahm and Ari and then write about events from their viewpoints also.

I Love You, You Schmuck

I wrote this review on April Fool’s Day, but I’m not kidding about how engaging, funny, and reassuring this book really is.

I listened to “The Brothers Emanuel” because I wanted to know how Benjamin M. Emanuel and his wife, Marsha Smulevitz Emanuel, raised three wildly successful, prominent men working in such divergent fields.

What I got was Clark and Ellen Griswold (National Lampoon’s “Vacation”, 1983), complete with a road trip with an elderly relative. Ezekiel (Zeke) Emanuel’s grandmother survived the trip, but the car’s radiator did not. Zeke, Rahm (current mayor of Chicago), and Ariel (Ari) chewed furiously, with their father stopping periodically to block the terminally leaking radiator with Wrigley’s gum.

I didn’t expect that dad Dr. Benjamin was part of an organization the British said were terrorists (Israel’s Irgun, but let’s not forget that British declared Benjamin Franklin and George Washington terrorists). I didn’t expect that mom Marsha was arrested multiple times for civil disobedience. Ari and Zeke spent some time in some jail cells, too. If Rahm did, I don’t remember it in the book.

Zeke Emanuel’s book is real history. He vividly remembers hearing Martin Luther King, Jr. speak, from the perspective of the child he was. Zeke talks about being taunted and beaten up because he was a “k***”, a word that I had forgotten even existed. He reminds us that people who supported racial equality were called “n**** lovers”. Hearing him say the “N” word (Zeke Emanuel narrates the book) was jarring, but true to the era. I’m seven years younger than Zeke and I was raised in Illinois, and I remember people saying that.

I was reassured by the book because the parents Emanuel made mistakes. Marsha had long, silent streaks which wounded and scared, and scarred her sons. Benjamin once ran after Ari, who had repeatedly changed television channels to wrestling (in pre-remote land, this was a big deal). Benjamin was probably intent on physically hurting Ari until Zeke and Rahm diverted him. Collectively, Benjamin and Marsha decided Zeke, Rahm and Ari should go to Israel for the summer. In 1967. Right after the 6 Day War. I heard this and thought to myself, “You sent your kids to a f***** war zone??!!”

I am absolutely certain there is much more to “The Brothers Emanuel” than this book, and I hope that one of the brothers will continue the story.

If you could sum up Brothers Emanuel in three words, what would they be?

Why would a reader want to change someone's life's story? It is what it is. He chose to focus on the positive aspects of his family's journey and there were really no "warts" (painful events, divorce, disagreements) but then again all of the major characters are still alive and why would a loving family member want to do that. He knew the story he wanted to tell and acquitted himself well. I liked it very much,

Would you listen to another book narrated by Ezekiel J. Emanuel?

His voice isn't the easiest one to listen to, but I did love the inflection and his natural pronunciation of English, Yiddish and Hebrew.

This is the story of an immigrant family whose story turns out to have some high profile characters, but more than that it is a family's story with emphasis on brothers, parents, grandparents and struggling to move up in their adopted homeland. I thought that it was very enjoyable and seemed genuine to me.