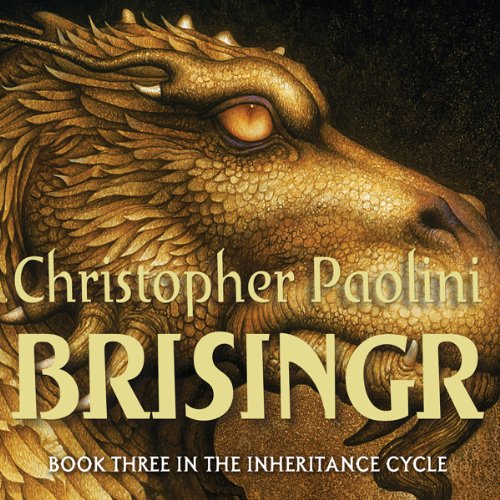 By: Christopher Paolini
Narrated by: Kerry Shale
Try for $0.00

It's only been months since Eragon first uttered "brisingr", an ancient-language term for fire. Since then, he's not only learned to create magic with words - he's been challenged to his very core.

Following the colossal battle against the Empire's warriors on the Burning Plains, Eragon and his dragon, Saphira, have narrowly escaped with their lives. Still, there is more adventure at hand for the Rider and his dragon, as Eragon finds himself bound by a tangle of promises he may not be able to keep.

First is Eragon's oath to his cousin Roran: to help rescue Roran's beloved from King Galbatorix's clutches. But Eragon owes his loyalty to others, too. The Varden are in desperate need of his talents and strength - as are the elves and dwarves.

When unrest claims the rebels and danger strikes from every corner, Eragon must make choices - choices that will take him across the Empire and beyond, choices that may lead to unimagined sacrifice.

Eragon is the greatest hope to rid the land of tyranny. Can this once simple farm boy unite the rebel forces and defeat the king?

What listeners say about Brisingr

Good voices and funny too.

Where does Brisingr rank among all the audiobooks you’ve listened to so far?

It's hard to say, since it's the first audiobook I've ever listened to so far.

Which character – as performed by Kerry Shale – was your favorite?

Honestly? I'd have to say Eragon, as Shale voiced him exactly as I've imagined his voice to be, when I read the book.

My tween daughters and I were skeptical about these audio books as I had read Book 1 and 2 out aloud which we had all enjoyed. But we were pleasantly surprised to find that we all actually preferred the audio books and it also gave me time to join in with crafts while listening. The reader's accents for each character, while at first were surprising, ended up being one of the special parts of the story for us. I would recommend listening to all 4 books in the Inheritance Cycle in audio. Well read, excellent quality and the story is unforgettable!

Paolini keeps up his reputation in his third novel.
I've always said the same this about his work, it was amazing that he wrote the first when he was so young, but I think it's time the age issue was put away. His writing has not improved since then.
Not that it necessarily has to. I really did enjoy this book. All I mean to say is that it's not really good literature. The big reveal was predictable (predicted, in fact) and the plot a bit contrived.
So, don't expect too much out of it, and Brisingr is an immensely enjoyable read (or listen)
But a quick note on the audiobook: The accents are so diverse and random. Some would call it talent, some would call it overkill.

Dissaponting as is abridged

Is cut to bits. So much of the book is missing. Was very disappointed. It should have mentioned it was in the description

Just, no.....
I have read the entire Inheritance Cycle, and loved every second of the books, I've listened to the first 2 books on Audible and the magic of Alagaësia was there, the Character's were there, I was there. So obviously I wanted to drift back for the remainder of this amazing story, I had read a few reviews and thought, "surely it can't be that bad."
Well I was terribly mistaken. I was originally slightly peeved that this was a shortened telling until old Kerry Shale started narrating. I could get over the change from a British narrator to an American one, no big deal there but the man can't pronounce name's correctly. His accents are extremely stereotypical, and cringe worthy. I honestly thought at a point Nasuada was going to come out with (Apu voice) "Thank you come again." there were so many and at 1 point I'm pretty sure there was a pirate voice used, seriously...
Whoever signed off on this must have been looking to get fired because wow!!
I undownloaded Brisingr and Inheritance, and if I could get my Money or time back I would, absolutely heartbreaking!!!

This isn't even half the book I genuinely feel cheated and I am now torn between re buying the full vertion and re listening to the 3rd book but now knowing all of the spoilers. This should have come with a warning ⚠ that it's not the full book.

Love the source material, this is severely edited, cutting out lots of the original story.

This is a disappointing version of the book. Look for the narrator Gerrard Doyle, his story telling is far more engaging.

Some parts were left out.

Some parts were left out compared to the paper version, not neccerally story, but details

Wonder why Audible online has the abridged version of the 3rd and last book of the Inheritance cycle (Eragon). And reading by an American. Bad form. I AM sure that there is an uanabridged version read by Gérard Doyle out there.

great series. this one is a bit all over the place

story is good but is a bit all over the place. jumping characters and accents changing so difficult to keep track

The story gathers pace with twists and turns that are very exciting! Can't wait for the next book.

would like to have the unabridged version of this book.. it seems rushed and uncompleted.

I've read the hard copy of the book probably twice - now listening from this I think quite a few parts were cut out here and there. The parts that were left out are not major themselves, but still didn't go unnoticed. Aside from that, it was still good stuff.