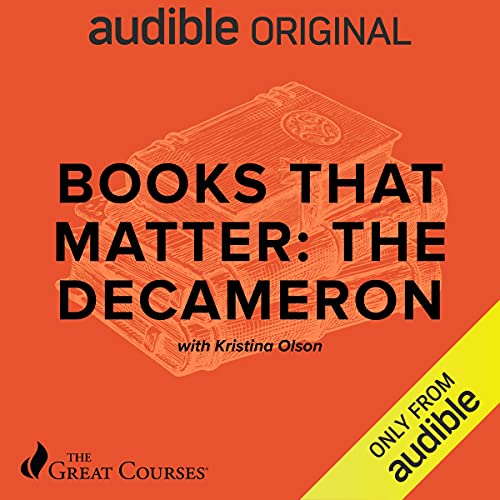 Books that Matter: The Decameron

A deadly plague ravages the land; so, a small band of people flee to the country. There, in relative seclusion and safety, they entertain one another with vivid stories that reimagine life and its possible and impossible outcomes. Sounds like a story from today? Think again. It was actually written more than 600 years ago, in a time and place so different - yet so similar - to ours.

A classic of medieval Italian literature, Giovanni Boccaccio’s Decameron still matters for us today. And Boccaccio scholar Kristina Olson reveals why in the 10 lectures of Books that Matter: The Decameron. Here, you’ll listen between the lines of stories that range from hopeful and spiritual to cynical and bawdy. You’ll hear words turn a sinner into a saint, brutes made noble through the power of love, and riches rediscovered on the open seas. You’ll find love in disguise, greed transformed into generosity, and danger staved off with wit. You’ll meet women who rewrite the laws of pleasure and tyrants who suffer in silence.

True, the times in which we live are vastly different from Boccaccio’s. Yet by connecting our own experiences with the stories told by this medieval band, you’ll learn why the Decameron is proof positive that, by listening to the past, we can give voice to the present.

Kristina Olson is Associate Professor of Italian at George Mason University where she has taught Italian language, literature, and cinema since 2005. She earned her PhD in Italian from Columbia University. Dr. Olson is the author of Courtesy Lost: Dante, Boccaccio, and the Literature of History and several articles on Dante, Boccaccio, and Petrarch. She is the coeditor of Open City: Seven Writers in Postwar Rome; Boccaccio 1313–2013; and Approaches to Teaching Dante’s "Divine Comedy", 2nd Edition. In addition to her current role as president of the American Boccaccio Association, Dr. Olson has served as vice president of the Dante Society of America.
.
ORIGINALS

In this roundup, each story is paired with an exceptional, show-stopping narrator who takes the tale to new heights.

If there's one writer whose work translates spectacularly to the audio format, it's the Bard of Avon.

What listeners say about Books that Matter: The Decameron

I had looked forward to a series of lectures on a work I've long meant to read. I tried to overlook some grammatical howlers ( "... As a student of the Middle Ages, the book ..." ) and clunky verbiage. I forgave the tired, simplistic opening hook comparing the black death to the covid pandemic. There are some interesting nuggets. But the narrator's loud, sharp, almost panicked inhalations after almost every sentence became unbearable. It was free with Audible Plus -- I would have been outraged if I'd paid for it.

I thought I was being offered the opportunity to listen to portions of the Decameron. Unfortunately I was offered only a grating, substandard commentary that, as it droned on, increased my frustration with the delay in getting to the Decameron itself. Though I was willing to subject myself to some commentary in order to get to the content of the classic work itself, the boring drivel just kept going on and on and on... Finally I looked more closely and discovered this whole offering was ONLY this maudlin carrying-on, so I stopped, marked the "book" as 'finished' and removed it from my library. I hope the time I've taken to warn others will save some from my bad experience. Comparing the current COVID "pandemic" to what Florence experienced in the Plague and "ignoring the quantitative" differences... what can I say except that was the final pain point where I bailed.

I thought I was downloading the classic book titled The Decameron. Not so! This is a woman lecturing about the book.

Great summary of themes and inquiries

Olson’s work is perceptive and relevant, exposing so much more of the meat on the bones of this seminal piece. I’ve studied The Decameron in college and have always enjoyed the depth of storytelling it offers, but because it’s steeped in a time and cultural so different from our own modernity, it is full of themes commenting on society that is left still a mystery to its true intention and meaning. Olson shows us the deep roots that gender, sexuality, and concepts of fortune and worthiness that help us understand the common fibers of where society was then, and the implications they have on our current and future world.
I appreciated that Olson unveiled theory of meaning alongside the open questions that will always remain. She both summarized the majority of the stories, the frame narrative, and helped to show the common threads leading to the deeper meaning. Her lively voice is engaging, and the ways she recalls previous themes is done with skill and amusement. I was thoroughly entertained and has kept me thinking days after.
One improvement would be having Olson read the full story as well. I would have loved reading it from her after this book.

Fair enough, but I don’t really need a lecture about the book when I’d just thought I’d hear the book.