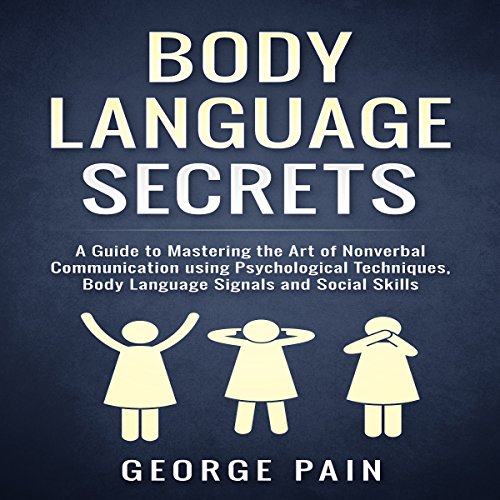 By: George Pain
Narrated by: Eddie Leonard Jr.
Try for $0.00

Do you ever wonder what other people are thinking? Do you wish you could figure out what's going on inside someone else's head? Then read below.

Since ancient times, we have used our body language to communicate, conveying our emotions and thoughts to those around us. Each person out there has a different body language, encompassing not only facial expressions but also body postures and gestures. Even eye movement is considered part of nonverbal communication, being closely followed by touch and using one’s personal space.

Eighty percent of human communication is actually nonverbal; some experts argue it may even be more. Body language is considered an integral element of nonverbal communication, being used, consciously or unconsciously, to interact with other people. It is often said that body language will serve to complement verbal communication. Through our gestures, postures, and expressions, we are actually transmitting a lot of information about ourselves to the interlocutor.

It is clear that body language can make the difference between a successful interaction and one that is doomed to fail from the start. Basically, the information transmitted through nonverbal means will ensure proper interaction between two or more people.

However, due to cultural differences and other influencing factors, it is important to state that body language can sometimes lead to confusion or a state of ambiguity. One has to be able to use his/her body language to his/her own advantage, working at the same time to decipher the nonverbal information transmitted by the other person with utmost accuracy.

In the end, by mastering the art of nonverbal communication, you will have more successful interactions with other people, reducing the risk of misunderstandings, confusion, and social awkwardness.

Here's what's included in this audiobook:

I was really hoping this would share some body language secrets, but it just gave the superficial knowledge we already know. It may give you a great reminder, but really there isn't anything new.

good info, hard to listen to

this book was great to obtain new information and also remind me of some body language knowledge that I was taught in college. the reader of the book has a very monotone voice; I realize that this isn't going to be a book that a I will or should hear in the same tone as say a mystery themed book.

This book says that a certain body movement could be one thing or the opposite but then goes to say it could be completely different based on the person. It also says that body language is very difficult to hide or change but this is a book on how to master it. I feel this book is very confusing and while it talks about body language and possible meanings there is nothing very solid in this book. Also there is a recap section at the end and it just rereads different parts of the book, they are not expanded on or anything just reread. This section made me think my app had messed up and went backwards only to see it was a new section. Overall I would not recommend this book, if you want to learn about possible meanings for body language it is decent but don't expect to learn anything solid from this.

I never knew this

As a corporate sales trainer, I am always teaching the importance of "listening with your eyes" when dealing with customers and clients. This book is amazing. It shows one how to properly read the obvious gestures as well as the harder to detect "micro-expressions".
The great thing about this book is the author simplifies and summarizes years of studies and training into a very easy to comprehend and fun to read book. A "must have" if you work with the public... or for every day use to improve communications with new personal contacts and existing friends

I've always been fascinated by body language. This book has some surprising info. Try not to think about our president when you listen to it.

My now 14 year old son has autism and struggles with reading body language signals in people. He's overcome all of the speech delays and other frustrations he's encountered in his life, and this is the only real lingering frustration he has. He wants so badly to naturally pick up on these ques in people just wasn't sure how. This book was perfect because he could listen to the information rather than have to read it. It is written in a manner that was easily understandable for him and I've already noticed him putting the information to use in interacting with others.

I’ve read some books in the PDFs about reading body language and this one is roughly the same. So more of a refresher than new information. I did like the audible a little more since I get a little bit more from someone reading it to me than using my mind. Someone else’s voice inflections can change the way things are perceived. Definitely a try if you looking for this type of book.

https://www.audible.com/pd/Body-Language-Secrets-Audiobook//B07DF9S6XK I found this book and I really enjoyed it!! It taught me a lot of things that I never knew about a persons body language! i was very impressed by it! #bodylanguage

This book gives you a lot of information about body language and how to read people’s body languages. You can learn a lot for this book. It wasn’t to long nor to short. If you want to learn more about people and their body language then but this book.

While noticeably brief I found this guide to body language signals and social skills to be very well organized and insightful. A majority of the audiobook focuses on how to best interpret body language signals dependent upon the context of the communication and relationship of those involved in the communication. A secondary focus of the book is on controlling the body language signals you broadcast not necessarily to deceive others but to maintain composure or better relay a point. Overall, I found the book insightful and concise. Like other have reviewers have mentioned, I am also interested in a lot more on the topic from this author but also content with what was covered in what is supposed to be a quick guide on a deep subject.