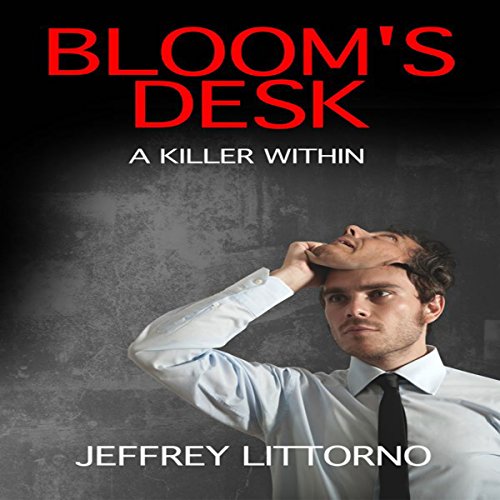 By: Jeffrey Littorno
Narrated by: Don Kline
Try for $0.00

The trouble began with the voices inside his head....

Glen Davis and his wife Christine have settled into a comfortable life in Northern California. Then the voices started....

A long-dead serial killer named Robert Bloom has chosen Glen as the one to continue his deadly hobby. Now the young teacher must choose between saving himself, or those around him.

What listeners say about Bloom's Desk

Did you ever wonder about what might be inside a teacher’s desk? Of course you automatically think pens, pencils, maybe some dry erase markers, papers, and assorted other boring objects. How about a murderer’s spirit? No? After reading Bloom’s Desk by Jeffrey Littorno, you’ll think it’s a very real possibility.

The premise Littorno puts forth is very interesting, particularly good for anyone who likes stories about hauntings or serial killers. I found myself wanting to see what would happen next, and there were some cliffhangers here and there that I looked forward to hearing resolve. Some of these parts were intense enough for me to want to yell at the main character. Frustration levels for the reader run pretty high in this book, but of course they’re supposed to. Surprisingly, at the same time I found it a bit slow, wondering how long it would all take to finally come to a head since there were periods in which nothing new was going on.

The parts with Glen’s wife, Christine, don’t seem necessary. In fact, Christine doesn’t seem necessary to the story in general. Instead the things that happen because Glen traveled to Korea were necessary, but he could have done that with a friend instead of his wife. Since many of the secondary and tertiary characters weren’t fleshed out much until absolutely necessary (in some cases never), it would have been worth it to eliminate the wife character and replace her with a friend that could have been developed more and consistently in the story.

It surprised me that Glen couldn’t figure out that something was wrong with him for such a large portion of the book. I could understand him not grasping what was going on, but much of the time he didn’t seem to know anything at all was happening to him. The ending was a good one from the beginning of it (it’s a long ending, but worth how much it’s drawn out) all the way to the very end, which provides a nice little jolt.

The voice talent, Don Kline, did an okay job, but many of his lines sounded like he was reading instead of acting and he followed a continuous pattern of speech that wore on me quickly. He also spoke in a halting way, so much so that sometimes I thought I’d heard the end of a sentence, but he then continued with more of the same sentence. It was a little confusing. I would also say anyone who is not a native or fluent English speaker could have trouble understanding his words as he slurs them a lot. The tonality of his voice was nice and the way he spoke sounded like a friend you’ve known a long time.

Overall, I think Bloom’s Desk is worth a listen, especially if you like paranormal books or even a creepy murder story. You’ll never look at teachers the same way again.