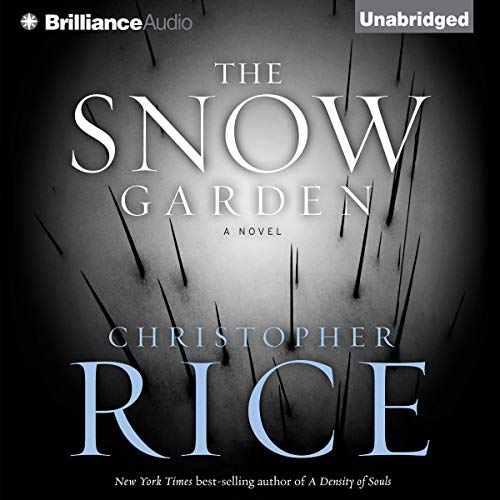 By: Christopher Rice
Narrated by: James Daniels
Try for $0.00

Atherton University, freshman year. Kathryn, Randall, and Jesse come from different worlds, but find themselves drawn together in unexpected ways. For each of them, college promises a bright future and a way to disconnect from a dark, haunted past. But as winter sets in, their secret histories threaten to disrupt the layers of deceit that protect their fragile new lives.

One dark night, a professor's wife is found drowned in an icy river, and rumors of murder threaten the safe haven of Atherton. Within days, Randall's illicit affair with the professor is about to be revealed in the local press.

Then, an old mystery emerges from the shadows - the discovery of a co-ed's corpse in a frozen creek 20 years before makes these accidents of the past and the present look a little too closely connected.

Gradually, the three friends find themselves snared in a web of lies, a web spun long before their days at Atherton. Snowbound on the university campus, they are unwitting captives of a malevolent force that drives them inexorably toward the "snow garden" of the title - a place of nightmares that is all too real, and all too near.

"In his second novel, the author, who is the son of novelist Anne Rice and poet Stan Rice, expertly builds suspense." (Booklist)
"The Snow Garden offers finely nuanced character studies as its pages whiz by to its chilling conclusion." (The Advocate)
"Daniels's low-key, clear voice electrifies the angst of the youngsters and increases the mood of foreboding and menace created by Rice." (AudioFile)

What listeners say about The Snow Garden

Murder, Mystery and Mayhem at it's best!

Where does The Snow Garden rank among all the audiobooks you’ve listened to so far?

Top 10! Great storyline and characters with a mystery at the edge you won't figure out until the end.

What other book might you compare The Snow Garden to and why?

Gone Girl by Gillian Flynn. Both are very suspenseful and intriguing.

What does James Daniels bring to the story that you wouldn’t experience if you just read the book?

I haven't read the book so I can only speak to the audible version, but I will say I loved how he was able to convey the story and the characters well.

Atherton University, freshman year. Kathryn, Randall, and Jesse come from different worlds, but find themselves drawn together in unexpected ways. For each of them, college promises a bright future and a way to disconnect from a dark, haunted past. But as winter sets in, their secret histories threaten to disrupt the layers of deceit that protect their fragile new lives.

Kathryn along with her roommate April, her openly gay best friend Randall, and his roommate Jesse who gives new meaning to the term promiscuous are just a few months into their freshman year at the prestigious Atherton University. The backdrop is a picturesque New England college town fraught with murder, mystery, mayhem, snow and random college hookups. The story opens twenty something years in the past with a chilling memory of lies, deceit and death that sets the stage for the series of events that about to unfold.

Kathryn, Randall and Jesse… the troublesome trio, have all come to college in an attempt to escape their own individual realities. All three haunted by their pasts and all three determined to make a fresh start and own their futures. The secrets they don’t share are the ones that could get them all killed though. When their Art Professor’s wife dies under somewhat mysterious circumstances, leaving behind and broken trail of clues as to what may have happened that dark, snowy night, Randall sets out to discover the truth behind her death.

What his friends don’t know is that Randall was having a torrid, secret affair with Eric Eberman, Art Professor and widower to the late Mrs. Eberman that just died in said crash. And he is just as determined to keep that secret under wraps. Kathryn and Jesse can sense the unease, the change in attitude and demeanor of their friend, they just can’t put their finger on the why. With the Holidays approaching, Kathryn’s parents are hounding her to fly home, the last place she wants to be. And Jesse’s dad, who is in rehab, is looking for money from the same person he always looks to for cash, his son.

These three “friends” have to deal with normal, everyday college antics, studies, demanding families, a lover with a dead wife, their own psychotic tendencies and the discovery of another death that happened on campus over two decades ago that is directly linked to Eric. With danger around every corner there is a darkness lurking in the shadows that surround these three young adults, a darkness that could devour them all if they aren’t carefull.

This book was a total mind f*ck! So many twists and turns with an ending that I didn’t see coming, not at all. The story started out a little slow, but once the pace picked up it didn’t stop. And regardless of the slow start, I was completely enthralled after that prologue, taking a look back to the past at Atherton University. That one chapter set the tone for the story and is directly linked to everything that is happening in the present. There are several stories slowly unfolding throughout this novel that converge in the last few chapters, and Rice did an amazing job of slowly weaving each thread together from one chapter to the next, that when it all explodes at the end it makes perfect sense.

It’s hard to truly describe this story and not give anything away, I will say that it is one of the best books I’ve ever listened to. The writing was so intricate and personal, the spine was the suspense as it held the story up, the bones was the mystery as it flowed underneath the skin, a never ending current. And the skin was the storyline that was strengthened by flawed, literally f*cked up characters that will keep you on the edge of your seat long after the story ends. I recommend this read to fans of mystery, suspense, psychological thrillers and just a well written story that is anything but predictable.

left me I tears

rarely am I both horrified and moved by a book in this way. Christopher Rice manages to do both within a few pages evoking a hopeful longing usually reserved for lost friends and the missed potential futures we might have shared . He evokes the awkward transition and escape from an unsettled hometown high school experience into a new independent college life for two freshmen battered and scared by events that lead them to flee from family and friends and move across country to find themselves at a prestigious university Rice skillfully spins a tail of the social. political , and emotional pitfalls that touch his charecters in profound ways. one of my favorite thriller/mysteries from the dawn of the 21st century it is cinematic in its description of events and emotions . .

If I had not been listening to the audio version of this book I would not have been able to finish it. It took a long time to get to the point of anything in this story, and there was skipping back and forth between time frames so it was confusing at times. I don't think I'll read this author again because I really did not like this book.

The thing I enjoy the most about Christopher Rice's storytelling is his ability to weave a giant spider web of plotlines which culminates in a slightly off center pattern. Look forward to reading more of these stories.

Tries to do too much

I enjoyed the book well enough, but I felt like the story line was porous and not overly plausible. I much preferred Rice's first offering, which wasn't so far-fetched as to grate the psyche.