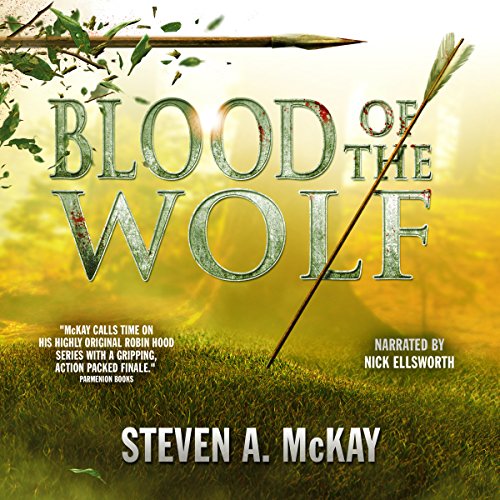 Blood of the Wolf

By: Steven A. McKay
Narrated by: NIck Ellsworth
Try for $0.00

And this time the legendary wolf's head is working for the sheriff....

After winning his freedom in Rise of the Wolf, Robin - with his faithful lieutenant John Little at his side - now spends his days travelling around northern England dispensing King Edward II's justice.

When a new band of outlaws appears in Barnsdale, Sheriff Henry de Faucumberg sends Robin and John to deal with them. Before the lawmen can track them down though, Will Scaflock is attacked and another of their old companions murdered in his own home by the outlaws whose leader seems to have only one thing on his mind:

Will Robin's reunited gang be enough to defeat this savage new threat that seeks to wipe them out one by one? Or will another old foe provide the final twist that sees England's greatest longbowman dead and buried?

This stunning conclusion to the best-selling Forest Lord series will delight and entertain listeners looking for action-packed historical fiction in the mold of Scarrow, Kane, and Cornwell!

What listeners say about Blood of the Wolf

There are at least two popular Robin Hood series available on Audible ... this one and The Outlaw Chronicles by Angus Donald. I strongly recommend BOTH. Anyone at all familiar with the Robin Hood Legend knows it doesn't end well ... McKay does a terrific job with this ... I was emotional over the last 20 minutes.

If you are a Robin Hood purist (are there such?) ... Be Warned ... McKay takes some liberties with certain aspects of it ... but it works fine. Be advised those were brutal times and a hard life in England in the early 1300s. There is blood and gore ...

You must listen to this series.

Would you consider the audio edition of Blood of the Wolf to be better than the print version?

I listened to the audio version. I listen to dozens of audio books while working. This Narrator is one of the best in the business. I know you will enjoy it.

What was one of the most memorable moments of Blood of the Wolf?

Have you listened to any of NIck Ellsworth’s other performances before? How does this one compare?

Yes he is very good. He is one of the best there is.

Steven McKay is a good author who has the ability to surprise the reader a number of times in the book.

Treat your self by beginning at the first one in the series.

Where does Blood of the Wolf rank among all the audiobooks you’ve listened to so far?

It ranks somewhere in the middle. it is a good historical retelling of Robin Hood with a twist.

I liked all of them. Some of the secondary characters stepped up to steal some of the scenes.

Which character – as performed by NIck Ellsworth – was your favorite?

If you could take any character from Blood of the Wolf out to dinner, who would it be and why?

Not sure about taking them out to dinner. They were each enjoyable. I would probably have all of them to the park for a BarB Que so they could entertain the others in the park.

I got this ARC via audiobook boom. The narrator was not up there with my other favorite narrators but was a close second.

Would you listen to Blood of the Wolf again? Why?

I totally enjoyed this story of Robin Hood and his crew adjusting as life moves to the right side of the law. It is a fun listen for those who enjoy fast action historical based fiction.

The characters viewed from both sides. Characters stayed true to themselves yet you witnessed their growth ad could see their moments of decision.

What does NIck Ellsworth bring to the story that you wouldn’t experience if you just read the book?

Nick Ellsworth gives each character their own identifiable voice and personality. The abiity to do this is a real talent and gift.

I was immediately drawn into this new reality when Robin goes to ask Tuck to join him from the convent It is a perfect blend of old and new.

Looking for a good listen? Interested in medieval times and tales of Robin Hood?
This is an exciting new take on Robin Hood and the what came next. Characters give us a glimpse of life on both sides of the law and Robin Hood, Little John and Friar Tuck as they move in the life after their life on the wrong side of the law.
There are sword fights, and defining moments that show how choices one moment can move life n startling directions.
Nick Ellsworth does a wonderful job bringing all the male characters o life. His voice is perfect for the story. His characters have their own personalities and are easily identifiable making the story easy to follow while listening.
“I was voluntarily provided this free review copy audiobook by the author, narrator, or publisher.”

I will preface this review by saying that I have not listened to the other books in this series.
However, I now fully intend to.

If you like the Robin Hood genre, this is a great book for you. It has all the elements you want in the canon. Sword fights, horses, the sheriff, Little John, Will Scarlet, and of course archers.

I'm a giant history nerd, so whenever I listen to historical fiction, I always keep one eye on history. Although the author took a few liberties with the history, on the whole, I feel that the period was well captured in colorful detail. I especially enjoyed hearing the backstories of characters on both sides of the line between outlaw and lawman, between good guy and bad guy. They really illustrate how one moment in someone's life can change the whole course of their future.

The narrator did an excellent job of capturing the main characters' voices and spirits. They felt unique from one another and fully realized. I have the same complaint I have about most male narrators, which is that their female characters all sound the same and don't seem to be fully realized. That mild complaint aside (especially as there were few scenes with women in this book) I thought the narration was truly excellent. I would gladly listen to another of this narrator's reads.

On the whole, I give this audiobook a strong endorsement. Solid A/A-.

I was provided a free copy of this audiobook in exchange for an honest review. And I have been 100% honest in my opinion of this title.

I'd recommend all the Forest Lord books! McKay is a fantastic new author, now fairly established as an attention-grabbing storyteller with plenty of pace and action from cover to cover. I enjoyed reading the books on Kindle, but listening to them on Audible also gives a whole new 'feel' for the characters thanks to an excellent and eminently suitable narrator!

What does NIck Ellsworth bring to the story that you wouldn’t experience if you had only read the book?

The voice and intonation of the narrator Nick Ellsworth isn't immediately gripping, but it slowly and delicately lures you into a world of rural northern England where he truly makes you feel as if you're actually there, and if not one of the characters, you'll definitely feel very comfortable as a hidden - almost spying - spectator!

Read them all - you'll not regret it!

What made the experience of listening to Blood of the Wolf the most enjoyable?

The story itself. The author just gets better with each book.

What other book might you compare Blood of the Wolf to, and why?

I suppose it's inevitable that I'd compare it to other Robin Hood novels for obvious reasons, but it's a favourable comparison.

What does NIck Ellsworth bring to the story that you wouldn’t experience if you had only read the book?

He gives each character an individual voice.

Blood of the Wolf

I absolutely could not put this down. Exciting, funny, at times deeply moving, this book is all of that and more. A brilliant end to a brilliant series and a worthy addition to the Robin Hood legend.

The series of The Forest Loard is an excellent listen. Quite different from Angus Donald's The Outlaw Chronicles.The only concern for me was the absence of Marian, who in most of the tales of Robin Hood is an integral character.That apart, well worth the listen

What made the experience of listening to Blood of the Wolf the most enjoyable?

The unexpected twists and turns

Two many good ones to single one out.

Have you listened to any of NIck Ellsworth’s other performances? How does this one compare?

To talk too much about or wax lyrical about this excellent story would give the game away. It would produce too many spoilers.
I will say it is 5 star and just get a copy to discover this very well written tale for oneself. Really it is very good !
Enjoy it !