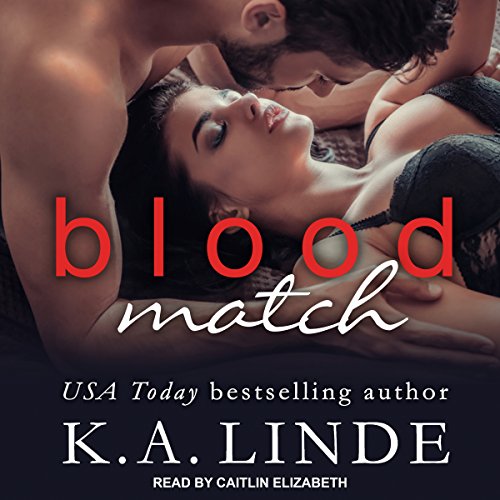 As the provocative, sensual Blood Type series continues, the rare bond between Reyna and Beckham is threatened by betrayal, greed, and twisted secrets.

A desperate human. A powerful vampire. A world divided.

Reyna Carpenter was promised paradise. She was delivered into hell. Giving up her body for money was supposed to be the hardest part of becoming a blood escort. She never expected to lose her heart to her dark, enigmatic boss, Beckham Anderson.

After being taken by a depraved captor who plans to rule the world, Reyna will do anything to return to Beckham. She just has to find the will to survive this game.

From the pawn, rises a queen.

What listeners say about Blood Match

Well, if you’re looking for an absolutely riveting and highly charged paranormal romance that has everything you’re hoping for.. and then delivers so much more, then this folks is it. The tense high octane drama, compelling action and intense rollercoaster romance between Reyna and Beckham follows on from book 1.. Reyna has now been imprisoned by Visage and personally used for her unique blood two months and hope of a rescue by Beckham is dimming daily. The pain, anguish, torture and anxiety is finally getting to Reyna.. then she’s shown just how terrifying life COULD be for her if she doesn’t play by some twisted rules. Next thing, and just as hope is dwindling, Reyna’s world is thrown a curveball that will toss her into a whirlwind.. a whirlwind that picks up speed, collects nail-biting drama along the way, takes one pulse-pounding twist after another and builds in strength until it becomes a dark and dangerous tornado ready to deliver its heartbreaking strike.

This book is 100% satisfaction guaranteed. I was lost in all the nail-biting action, consumed by the highs and lows of Reyna and Beckham’s push/pull romance, breathless with its sensual lure, emotionally invested that the bad guy will get his dues.. that all will end well.. and that love WILL conquer all - but that, as they say, is another story.. and I can’t wait! New characters, new scenarios, sizzling scenes and action-packed drama that draws you in. The narration by Caitlin, told from Reyna’s POV, was great and each character had their own voice.. making it an easy to follow smooth listen.. and an exciting one too.

Worth a credit? Absolutely one hundred percent YES.. and, if you too like PNR, don’t miss this three part series.. but it must be started at book 1. And K.A. Linde.. you’re a wickedly wonderful wordsmith, a genuine genius with plots and pitfalls, a word witch who weaves breathtaking scenes that simmer and shock.. that thrill and chill.. that bubble and boil and, oh boy, you’re a talented torturer when it comes to cliffhangers!!!

The worse lead EVER!!

This girl does not think, always quick to whines about almost everything.
Asked stupid questions when she should be quiet Act without thinking anything through.
poor Beckham this b**** does not deserve his attention, acts like a child that is not a lead I don't know why the writer thinks this girl would be a good lead. It's good to be confused it's excellent to have weak points but it is disgusting to be so stupid this girl has no back bones.

after the MC is rescued from imprisonment, she decides that her not being allowed out and about is basically another form of imprisonment so then she goes to sneak out, it doesn't matter that a lot of people risked their lives to save her, it doesn't matter that they had to pull several sleeper agents just to rescue her, or that if she's captured by the bad guy again she's endangering hundreds of thousands of lives, no, none of that matters, all that matters is her getting to take a stroll and feel the sun on her face.

So I stopped listening cause I just couldn't get past how selfish and immature she is.

OMG!!!! This story could be so much better if REYNA wouldn't whine so damn much! I just want to know what's going to happen so it's taking me forever to finish because I have to stop and come back to it! I never write reviews but dammit 😤 Reyna is too extra to be the main character!

NOT ANOTHER PNR, GREAT VAMPIRE SERIES

I really enjoyed the action and adventure of the story. I really enjoyed the last chapter when R. dresses up like Death as she calls it and the description of the ballroom and severs. It was not a regular PNR with all romance which I am so sick of seeing but has a story line that continues throughout each series with the same characters not continuing changing love interests.. Well done K.A. Linde. The narration was as well great too.

I'm definitely reading the next book. ...spoilers ahead...
despite the ending I had a hard time wrapping my mind around the idea that she would get back together with him with basically no answers to her questions. With no idea as to what his " "cover" would mean for there future. Their "cover" had no end in site. Even if you call something fake. His goal was to infiltrate for as long as possible. Meghan had even said to Jodi that they didn't have the forces for a substantial raid. So they had A LONG time before they were ready. Which had me wondering how long and far he would take his fake cover. He would have to get married at some point. Which would mean moving in. He only visits rarely as it is. She sat at her brothers wedding and don't tell me it didn't cross her mind about the thought of Becks and Penny's "cover" wedding plans. if the public thought she was buying a dress they would expect a wedding SOON. Fake or not no man I'm in a relationship with would be engaged to another woman even in public eyes only. The end was crazy. moving onto the next book.

I thoroughly enjoyed Blood Match, the second book in the Blood Type trilogy. Like the previous book this too ended in a cliff-hanger, which had me quickly searching for the next book.

To recap, Reyna desperate to earn money went to work for Visage as a blood escort. She ended up becoming a permanent blood escort for the enigmatic Beckham Anderson. At the end of book one Reyna found herself in a precarious position. In Blood Match, which picked up where book one left off and we see Reyna being held captive by Beckham’s boss, Harrington, where she was being used solely for her blood because of her rare blood type. Her life with Harrington was literally that of a prison. She had no access to the outside world and she was constantly being poked by needles. Her sanity was hanging by a
thread, however her hope of a reunion with Beckham and her brothers helped to keep her sane.

The story started out slow and gradually picked up the pace leading up to a jaw dropping end. Interesting information came to light regarding Beckham and his role in the Elle the mysterious organization fighting against the vampire hierarchy. I learned so much more about him, which provided a better understanding of his character.

Reyna was no longer the naive person I met in book one. Her experience as a result of her being held captive by Harrington gave her a first-hand experience of harsher side of the vampire world. However, the things that remained the same were her impulsiveness, her ability to ask a million and one questions and her propensity for attracting trouble.

Her relationship with Beckham has blossomed. I love how protective Beckham was towards Reyna, but at the same time allowing her the freedom to be herself. I loved seeing them together.

This installment introduced new characters were brought into the mix and they helped to make things interesting. The story had its share of action and suspense. There were twists that I never saw coming, but the most brutal of all was the ending. It left me in a state of shock. Even as I am writing this review, I keep wondering if it was a plot to trick the enemy. It had to be, there could be no other logical explanation.

Conclusion/Recommendation
Overall, a solid story and one I would recommend to fans of paranormal romance.

Narration
Caitlin Elizabeth continues to narrate the series. She has improved since the first book I loved how she handled the voices for each character. Her voices were distinct and she brought life to the story.

liked this one. will finish series

it was okay. ending was sad and shocking. hope the. next in the series is better

This book was fantastic. I loved how Beckham found his true mate but I didn’t think he would die in the end. I hope that you won’t leave it that way. You left me guessing if he comes back. Great writing. I can’t wait to listen to the last book.

This book wasn’t as good as the first. We get a lot of questions answered but it does end with a major cliffhanger. I got a little annoyed by Reina getting all bent out of shape about her body being used for food....ah hello has anyone heard of breastfeeding??!! I was a walking grocery store for my kid for months! Other than that the plot is interesting and I have to find out how this ends.

I love these books they would make great films , the scary vampire but also the romantic love affair and the great story with twists and turns .
So very well interpreted by Caitlin Elisabeth