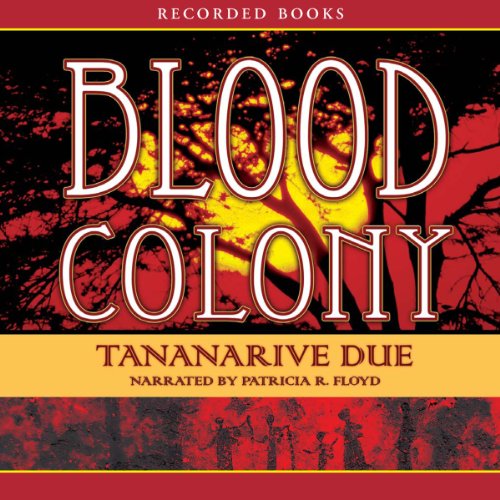 By: Tananarive Due
Narrated by: Patricia Floyd
Try for $0.00

Best-selling author Tananarive Due's novels about a colony of immortals have won widespread acclaim, including an American Book Award for The Living Blood. The story continues in Blood Colony.

Said to cure almost any illness, the new street drug Glow has attained almost mythical status in America. The key ingredient in Glow is the Living Blood, which courses through the veins of 17-year-old Washington state resident Fana Wolde.

Distrustful of her parents and eager to share her healing powers via an elaborate underground network, Fana sets out on her own. But what she doesn't know is she's being hunted by a mysterious and homicidal group with ties to the Vatican.

Featured Article: These Authors of Color Are Revolutionizing Horror—Listen If You Dare!


Fortunately, authors of color have revolutionized horror, enriching it with their voices and gifts of great storytelling while using the conventions of the genre to unpack the traumas of racism, sexism, classism, and more. The writers collected here are game changers, their mastery of the craft extraordinary. Whether you’re listening at home or on the go, you might want to make sure the area is brightly lit...and that there’s nothing lurking in the shadows.

What listeners say about Blood Colony

It was like listening to a play. This narrator is a real story teller. The book is just up my street; mystery, magic, paranormal mixed in to the present day.

Great Book, Narrator leaves MUCH to be desired.

Started reading the hardcover before I saw this audio version. I love this series by Due and this book is a great continuation of The Living Blood. The narrator's reading, however, is extremely distracting. Poor pacing and timing with way too many long pauses in the narration. Although the main character is an adolescent I don't think the book should be read like a young adult novel. Going to have to go back to the hardcover and "re-read."

Where does Blood Colony rank among all the audiobooks you’ve listened to so far?

The Narrator was fabulous. She got the accents of the characters, spot on!! The story was riveting and unique. I would HIGHLY recommend this book!

What was one of the most memorable moments of Blood Colony?

Finding out who Charlie Domingo really was.

Blood calls for blood. (I think that's the Italian line from the book)

I loved the characters in the book. The narrator helped me to imagine all of them very vividly in my mind.

I'm still reading the series, but so far I'm blown away. Mrs Due is an artistic genius. I can't wait to get to the next book.

I started listening to this book on a plane and promptly fell asleep. I tried to listen again, forcing myself through part 1 and finally gave up. The narrator might have a lot to do with my dislike of this book, maybe if I actually read it myself...who knows. I love this type of book, I just don't like this one. The character names, the voice, the prose is just irritating to me.

This was a waste of time and money. The book itself may have been good, but there was no way to know. The narrator's style made it nearly impossible to follow the storyline.

She pauses after every three or four words and her sentnences run together. She does fairly well with accents, though, but it was not enough to overcome her tempo/style.

Her voice is pitched neither too high nor too low, so she would be pleasant to listen to if she can overcome the manner in which she reads.

I am not overly picky. If I write something negative, it is unusual.

This is one of the best series I have ever read/listened to! I have over 1200 titles in my library so that is saying something. I wish there was another book after this one. I finished this years ago, it was my 2nd go through of the series and I enjoyed it even more this time.
If only it was true and there was glow out there to help people!
I want to know what happens with Fawna, Michele, does Justin get his 20 years back, etc.
so many unanswered questions!!!
Excellent read but start with the 1st or even the 2nd book or you will miss a lot bc you won't understand where people or issues came from. I easily give this book 5/5 stars!

I've enjoyed Ms. Due, everything that I've read all really good. The reader was also wonderful..

Stopped in my tracks

This booked kept me spell bound. I didn't want move for fear of missing a single word.

Loved it. Found myself rooting for Fana. The narrators really helped me live the moment.