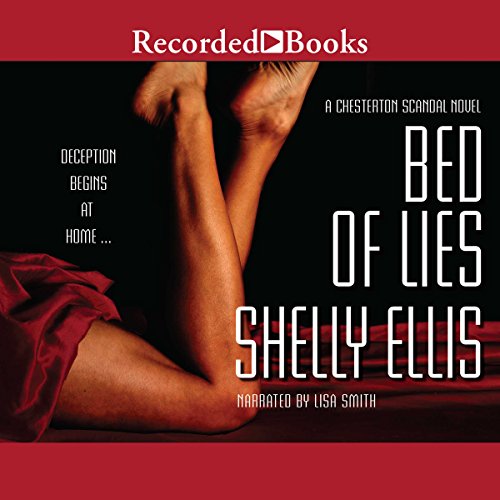 By: Shelly Ellis
Narrated by: Lisa Smith
Try for $0.00

Secrets and scandals are a way of life for the Murdochs of Chesterton, Virginia. But the lies that bind them may end up tearing them apart.

With his drama-filled marriage behind him, Evan Murdoch has finally found happiness with his longtime friend turned fiancée, Leila Hawkins. But when his party boy brother, Terrence, is seriously injured in a car accident, a gossiping press puts the family back in the spotlight. Soon Terrence could face a lawsuit - and much worse if his vengeful half brother, Dante, has his way. Terrence's only bright spot is journalist C. J. Aston - but is she really on his side, or does she have another motive?

While Terrence struggles to recover from his injuries, Paulette, the little sister of the family, is struggling with a secret: She's pregnant and unsure whether the father is her blackmailing ex or her husband. Amid the turmoil, Evan does his best to stay above the fray, but a shocking revelation makes that impossible - he's a Murdoch, after all, and trouble seems to be their business.

What listeners say about Bed of Lies

I am so disappointed. these women are weak and unrealistic. Some of the characters were downright behaving stupidly. I hope part 3 is better this was average

I waited a long time for this book and it was well worth it. just wished it didn't finish so abruptly.

Can't wait for the next one!!!

This seris has me hook, line, and sinker! I can't wait for more! Chesterton get ready!

Hurry with the sequeal. Need to find out what happens wit Evans crazy ex, as well as who shoots Dontell. Please don't keep us on suspense for to long.

This was a pretty good book it takes a little minute to pick up the story line. But once you it gets rolling it takes off. I'm about to start part 3 now just too see what happens next...🤗🤗

This one was a GREAT story to listen to and I can't wait for the next one.

once again, this story was filled with drama and intrigue that kept me entertained. some items were predictable but not enough to ruin the story.

I liked the storyline overall but I hated how it was dragged out. Sherisse in my opinion could have been left in book one and Leila is so dramatic in here and Paulette omg girl just tell the truth I just wanted to punch sherisse shake the shit out of Leila and have a damn intervention with Paula 🙄🙄🙄

So far I'm loving the series. The narration is wonderful 👏 👏. However I would've liked to have heard more from Paulette's character.

I cant get past chapter one and this narrator to give this book a chance.