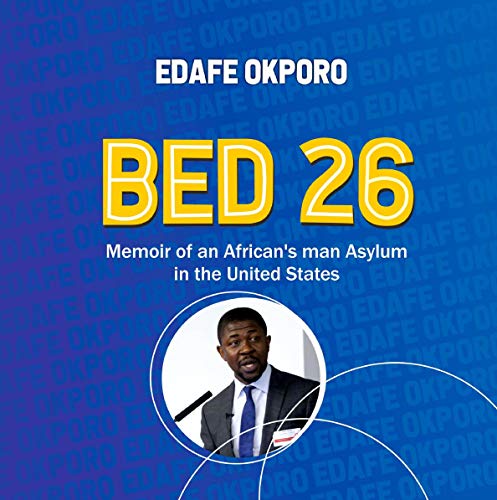 Bed 26: A Memoir of an African Man’s Asylum in the United States

Bed 26: A Memoir of an African Man’s Asylum in the United States

By: Edafe Okporo
Narrated by: Michael Goodrick
Free with a 30-day trial

My life, as you will listen, has taken me from one place to another. Bed 26 is the story of how I fought my way out of constant persecution and reclaimed my freedom. It is my hope that by sharing my experience and my pain, you will begin to understand why people are forced to immigrate.

This is a revealing memoir and empowering manifesto, with contributions from other asylees, refugees, and Nigerian LGBTQ persons. Nong Richie was born in Nigeria and came of age in another United States. Nigeria, his home country, became an estrange world. He was continually persecuted by mob, and living in Nigeria soon became a personal nightmare of constant mob attacks and deaths of his friends to HIV. Nong escaped into the world of his mind from the expository details of the war he suffered as a child and high-profile attacks against himself and other gay Nigerians. Every detail of his personal life became public, and the realities of an inherently unlawful society emerged with every script of this book. The detention center packaged his trauma as a bombshell, hijacking his image and identity, and making profit from every night he spent in it.

Bed 26 is his raw, honest, and poignant account - a no-holds-barred, pull-no-punches account for the persecution of him and his community. He was a fearless activist and an unstoppable force for change, who was determined to expose the truth.

What listeners say about Bed 26: A Memoir of an African Man’s Asylum in the United States

Understanding each other is important

I'd like to say I lean a bit more conservative in my general views, This book has shown me how we need to be a bit more compassionate when processing people who are coming into our country, It's so important that we have border security so that we know who is coming in but its even more important that we don't look at every immigrant as a criminal. Thank you to the author Edafe for bringing this story to light.

Edafe Story deserve more visibility, he has shown us consistently what it means to be described as a courageous person. I believe everyone should hear your story and decide for themselves! Mary Oliver

This book is simply an amazing story of both courage and determination. Michael is an eloquent narrator, I encourage everyone from any background to listen to Edafe story of grit and inspiration!

I cannot even begin to describe or explain the level of courage Edafe Okporo has shown both in his life and in this book. I am completely amazed by how the book was able to tell the story of Edafe from childhood till he became an adult, totally exposing the struggles of young and older gay men in Nigeria. I resonate with this story because I had a gay cousin that I grew up with called Alex, he was bullied from his teenage years till he became an adult because of his effeminate looks. He was called woman, woman wrapper and he was looked down upon by the so-called masculine boys. He could not hangout with other boys, he mostly hung out with the girls. I did not understand the effect the bullying had on him, but now I do because of my own experiences as a queer woman and the truth in the narrative of this book. My cousin suffered mentally, emotionally and physically until he died because he was rejected by the Nigerian society. So I thank God for the courage Edafe has to tell his story. This book will help generations of gay men understand that they are not alone in this struggle

Edafe's story is extremely courageous and moving. Not only you hear what happens when asylum seekers arrive to the USA but also conditions in his former homeland Nigeria. Sharing his stories makes the book really interesting and easy to read, His fight for equality is not for himself only but all. This is an eye opening book to help understand how courage works to create a better world for all. A MUST READ!!! -Işılay Çabuk

An incredible account of an immigrants journey into our country. It was very eye opening realizing what people go through to get here.

Edafe Okporo does such an amazing job with writing this story that you can hear his own voice through the narration. This story is brave, inspiring, and very honest. It shows his ability to self-reflect and take action. He has been through a lot. I wish the best of luck to him.

Edafe explains well the conditions in his former homeland Nigeria that necessitated his fleeing the country he loved. Quite a journey. Edafe clearly demonstrates that many asylum seekers would much prefer to stay in the country they were born in than have to flee in fear for their lives. Through ‘letters’ and other testimonies, the reader learns about the experiences of others, not only Edafe. An inspiring book of courage and perseverance written in an authentic voice and urging on the fight for equality and acceptance of people who are different.

It is a very moving Life story, one that more people in this country need to be aware of. It is very difficult to realize that this kind of treatment of fellow human beings still goes on in this world. It would have been even more powerful if there had been more statistics and related stories of others going through similar treatment in Nigeria. I enjoyed the Nigerian history and cultural lessons. The stories dealing with his family were so interesting - eye-opening as to what is similar and what is different between our two cultures. The narrative was sometimes confusing as Edafe jumped back and forth in Time and from Nigeria to the U.S.A. Perhaps he could have combined the related material and connected what was happening here in detention and elsewhere with specifics of his Life back in Nigeria. Edafe is to be commended and admired and respected for having gone through all of that which happened to him and still land with his two feet on the ground and adjusting as well as he is doing to his new Life here.