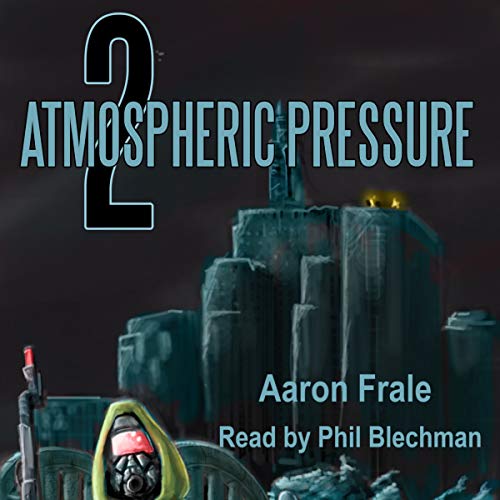 By: Aaron Frale
Narrated by: Phil Blechman
Try for $0.00

Olson is trapped in a city that is on the hunt for him. He has nowhere to run as the whole place is sealed from the toxic atmosphere. Nobody wants to help him until he meets a scientist who knows his true origins. Meanwhile, back home, his friends are caught under the thumb of a brutal regime, until they decide to fight back.

What listeners say about Atmospheric Pressure 2

This is the second book in Aaron Frale's Atmospheric Pressure series. THings start coming together and making sense. We learn how the change in atmospheric pressure occurred and what drove the characters indoors. We also learn that some (at least one) of the characters has a unique DNA quality. There is plenty of action and lots of conflicts. Some things caught me by surprise and I'll be sure to read further installments.

Regarding the narrator, he is one of the better ones I've heard on audible. He does a good job of using different voices and the cadence is good.

Overall, this was an enjoyable book and recommended.

Olson & Natalie against the world!

This book picks up exactly where the first book stopped and It is definitely NOT a standalone. If you haven't read the first book, you won't understand what is going on with this one.

That being said, the book starts with Natalie, her father, and Olson leaving The City, trying to reach another city because of the tyranny of Natalie's uncle, Eric. At the end of the first book, Eric has taken over as Dictator and forced our trio to flee for their lives. When their oxygen starts running out, Natalie and Olson make the decision to head out and leave her father behind, hoping for the best.

When they arrive at the new city, they begin to realize that their lives are still in danger, even though they have gotten away from Eric's regime (or have they?). Olson begins to learn more about his parentage and possible reasons for the unique circumstances surrounding his birth.

Meanwhile, back in The City, some of Olson's friends don't like the way things are going and decide to start a revolt against Eric and his Red Bands. Living in the ventilation shafts of their school, they watch the horrors of the new regime and try to rescue as many of the students as they can before they are forced to participate in barbaric games against each other. The only way out is kill or be killed.

In this book, the author also introduces us to a scientist from the past, Dr. Helena Gomez, as she learns more about the dangerous red mist that seems to be invading the planet. Helena tries to convince world leaders that climate change is very real and is threatening humanity. But, nobody seems interested in listening. I enjoyed following Helena's path of discovery and found the possibility of this red mist's origin to be very intriguing.

However, it was a little difficult to follow the author's progression in this book. I think that he was trying to make the reader figure out what was happening by not telling us that Helena's story was the beginning of the saga of Olson and his contemporaries. It took me several chapters before I finally realized that Helena was a character from the beginning of the problems and the building of the enclosed cities.

Also, Helena's story jumped forward a lot (rather abruptly) and it was a little hard to follow. In one chapter, she was leaving The City behind, then she was halfway across the world without any explanation. This sort of thing happened several times and it make the story hard to follow. Some of her actions were a little unbelievable at times and make me question her intelligence.

This series is interesting and shows a lot of potential and I look forward to continuing it. I wonder if I was actually reading the book instead of listening if the flow would be better. The narrator does a pretty good job in his performance, but I did find myself losing track at times.

The author has definitely created a world that strikes fear into a reader who has a scientific background or just loves to read dystopian tales. He brings up a lot of scary scenarios that I could see actually happening, with ethical questions at every turn. How far would humanity go in order to save our species? And, how far should we be allowed to go in order to do so? It really makes the reader think about the implications of a world facing destruction.

I was given the opportunity to listen to the Audible version of this book by the author and chose to review it.

Good continuation of book one.

This book picks up exactly where the first book ended without any time gap. I wish the narrator from the first book had performed this one. With this narrator, I found myself zoning out and having to go back and listen again. In this book you find out the back stories to the cities and it's founders which I found interesting.