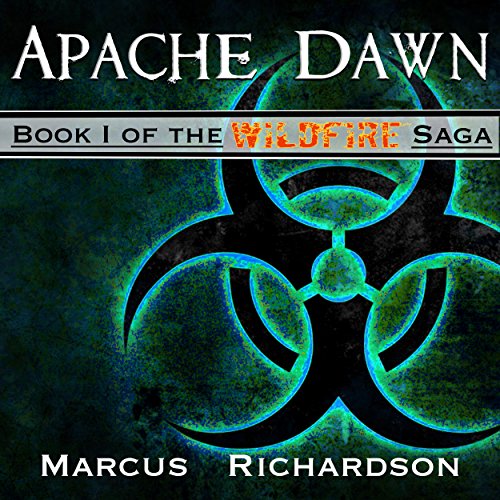 By: Marcus Richardson
Narrated by: James Romick
Try for $0.00

Ten years after the deadliest pandemic in human history, the same devastating strain of influenza strikes America without warning. One man holds the key to stopping the deadly outbreak in its tracks and the governments of the world - including his own - will stop at nothing to find him.

From Los Angeles, to Boston, to the Northern Rockies - follow Navy SEALs, Army Rangers, and average Americans as they struggle to save America and themselves. Apache Dawn is the story of America's fight for survival against a terrible virus, foreign invasion, and political intrigue.

What listeners say about Apache Dawn

I don't know if it was the narrator, the author, or both, but It was pretty bad.

It was a little hard to follow at first, because I have trouble with names & sometimes have trouble keeping track of who is who in a long involved story like this. It is very well narrated however & I was soon totally engrossed. I somewhat hated for it to end. Although it's a fairly long story, the writing & narration were both excellent & I was never bored. I now need to find time to read or listen to the other 2 books in the trilogy.

Great start to a new for me series

Although I came to this series later than most it is certainly full of action, intrigue, and honor.

I like how the characters are developed slowly and look forward to learning more about them in subsequent books.

James Romick brings this book to life with his narration.

If you are into pandemic apocalyptic political page turners then Hold In, you'll LOVE this!

When I selected this series to read/listen to, a couple less than positive reviews and the fact that all four books were available with free codes made me wonder if I had made a mistake in my choice. By the middle of this first volume, I am happy to report I am no longer concerned. From the first time the U.S. Army Rangers and the U.S. Navy Seals commandeered their role in the story, I was hooked. The characters, their actions and genuine reactions to situations grabbed my interest and haven’t let go. The story switches between several sub-plots; Denny the teacher in Salmon Falls Idaho, Chad the hunter having valuable blood in Glacier National Park, Brenda Alston doctor and former military Captain in Los Angeles, Captain Derek Alston with a squad of Rangers ordered to retrieve Chad, Master Chief Cooper with a platoon of Seals directed to secure the President from a hospital in Los Angeles, Vice President Harold Baron and his *cough* assistant Jane Reynolds. Quite a list to keep track of but the tale moves along smoothly. The main story has the United States being invaded by foreign troops, softening us up first with a weaponized virus. I enjoyed this first volume and look forward to the next. I was given this free review copy audiobook at my request and have voluntarily left this review.

Would you try another book from Marcus Richardson and/or James Romick?

I rarely write reviews, but I just could not leave this one alone. I am a big fan of dystopian future stories, but I found this one to be so unrealistic ( and I love me some zombies, if that puts it into context) that I had to quit. I have hundreds of audiobooks, this is the first I ever gave up on. The military characters were horrible, the native character was a walking, talking stereotype, and the story line screamed of globalist take over paranoia. If that's your cup of tea, you might love it, but it wasn't for me.

Riveting, corruption at its best!!

This was quite the epic saga to get into, but what a wild ride! A masterpiece of political corruption & intrigue, and a well orchestrated invasion, with a nasty little pandemic thrown in to add to the suspense! The back story of the main characters is lengthy, but it helps later when you get to know the characters and their roles in the story, my favourite characters were Cooper and Denny! It wasn't long before I was totally engrossed and despite 18 hours I was disapointed when I got to the end! James Romick provides wonderful narration and helps bring this book to life, I need book 2!