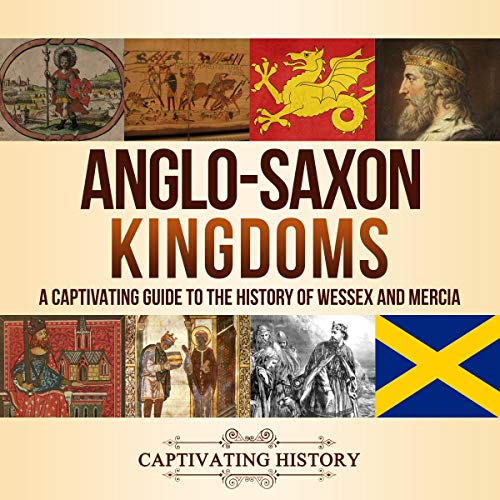 By: Captivating History
Narrated by: Colin Fluxman
Try for $0.00

If you want to discover the captivating history of Wessex and Mercia, then pay attention...

Some of the topics covered in part one of this audiobook include:

Some of the topics covered in part two of this audiobook include:

So, if you want to learn more about Wessex and Mercia, scroll up and click the "buy now" button!

What listeners say about Anglo-Saxon Kingdoms

This book covers more than just the Anglo-Saxon period in England. It begins with an overview of Roman Britannia and continues through the Norman Conquest. The authors do an excellent job of bringing together research conducted not just by archaeologists, but various other disciplines in order to shed as much light as possible on Anglo-Saxon culture and history.

This an excellent book

This excellent book is a VERY detailed history of the Anglo-Saxon world. It is up-to-date, scholarly and very well researched. It also shows that there are still many areas of debate where the experts on this period of history disagree amongst themselves.

Fascinating. I have recently had a DNA test that showed British and Scandinavian roots.. I love reading about the clash of those two cultures in Anglo Saxon Britain

It is well-written and accessible prose by the chapter-identified authors; much recent multidisciplinary information and analysis. As currently authoritative as a single volume for the lay-reader could be on this subject.

The best book you'll ever find about Anglo-Saxons and the world they lived in. This book is dense and is not for the casual listener. You must be prepared to spend many hours with this book in order to get through its chapters.

I love this book and I couldn't recommend it enough to anyone with an interest in the Anglo-Saxon era. My only complaint is not with the book itself but how it was evidently handled.

I found the writing very clear and easy

I found the writing very clear and easy to understand. Having looked at a number of books about this period and read several from different perspectives, this was, by far, the best expenditure while I was trying to understand that place and time.

This book covers a lot of ground and a lot of disciplines. It isn't afraid to do some informed speculation (something serious historians often shy away from, much to the consternation of the reader).

A good account of the Anglo-Saxon period of a little known semi-autonomous region of England in the (so-called) dark ages. Very interesting

A beautiful and informative work

A beautiful and informative work . A good basis for further information. I highly recommend it.

This is possibly the least captivating book I have ever listened to. Really difficult to follow due to how it is narrated.

Marvelous description of an amazing display, very clear and interesting guide, and good for history lovers.