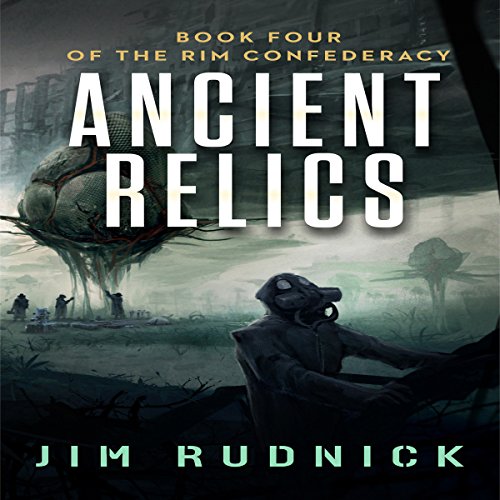 By: Jim Rudnick
Narrated by: Shawn Saavedra
Free with a 30-day trial

Taking on a new captaincy with the barony means that our captain Scott can now live a life of ease. His drinking will be tolerated, his hangovers ignored, and he will be in charge of the newest, fastest Supra Destroyer in the RIM Confederacy.

Life is good for Tanner, who enjoys his new ship and the favors of the Lady St. August, yet the PTSD he still suffers from the thwarted prison escape on Halberd still haunts him. He copes but needs support from loyal friends, and that keeps him going.

Except he soon learns that the simple task of doing his shakedown cruise on the BN Atlas means that he inadvertently finds a discovery that will shake the very foundations of science all across the galaxy.

What listeners say about Ancient Relics

Another decent entry in the Rim Confederacy series

This isn't the best in the series but it does bring some unique ideas to the overall story. Pacing was slow but consistent and aside from a bit of a slow start, the book flew by thanks to great narration. I enjoyed Shawn Saavedra's narration quite a bit and was disappointed to see the author switch narrators again with book 5.

I guess I'm just not a coffee drinker

First of all, i confess that i have not read the previous books in this series... so please consider that fact if you continue reading this review. I may have been missing some story/character foundation but i also think a book, even in a series, should be able to stand on its own to some degree.

My issue was with the lack of anything interesting in this book. I did not find interesting or care about the main character. There are far too many instances where there seemed to be events, actions or build up that could cause a change or lead to development in the story... but instead were just passed by or ignored because they were of no consequence to anyone and just... happened to happen. No payoff. I get the idea of adding a little mundane for realism and believability, but it happened so often that i just started to give up hope that something great would ever happen. I'm sorry to say i was not proven wrong.

Don't get me wrong. Things happened. Some cool things happened... but nothing cool enough to be worth the wait or strong enough to endure the enthusiastic, meticulous and meaningless observations constantly passing by the reader, along the way

If you like long detailed descriptions of planets, rooms or dialogue between political or military personnel; if you want to observe the slow boring events in the lives of every day people - set against a sci-fi backdrop; if you enjoy scrupulous details which contribute nothing to a story and of which you don't care about; OR if you, when you read a book, always want to be assured that the main character has his coffee available, just the way he likes it... this book is for you!

Great Continuation to the Series

What did you love best about Ancient Relics?

This book was a little slower than the first 3 in its action, but that it spent more time covering the Characters, and the Political situation on the RIM. We also got to see a lot more of the Barony this time, which made for some fascinating reading. Rudnick opened up the Barony Navy, and we got to see it through Tanner’s eyes as he explored and described his new surroundings. It is very cleverly written, allowing Rudnick to tell us about these things, but giving us a main character as the narrator, but all within the story. This story also explored the Lady St August a lot more which everyone has been waiting for.
Without giving away too many spoilers, they are sent to an uncharted planet on their shakedown cruise, and discover something that will change life within the Barony, and within the RIM as well. We also get to see the new Destroyer in action which was really awesome.
This was a very clever story, very engaging and very well written.

What other book might you compare Ancient Relics to and why?

All the other books in the RIM Confederacy Series

What does Shawn Saavedra bring to the story that you wouldn’t experience if you just read the book?

This was the first time listening to Saavedra as a Narrator, and I thought they did a very good job of reading. Overall, he gave a very clear and concise reading, with excellent voices for both genders. The great thing about the narration is that it brings the story to life, engaging you in the story unlike when you just read it, making you feel like you are actually a part of it.

A New Ship
A Strange Planet
A Mystery that may Destroy them ALL!

Rudnick writes so well as he combines the Military, Royalty and Political situations into a story as well as the personalities of a few key characters to tell an interesting and engaging story. This is Military Sci-Fi as it should be, interesting, detailed, exciting, fun, with some really fast paced and well described combat scenes, as well as brilliant dialogue and intrigue across sectors of space. This is another exceptional book in the series, can't wait to read the next one!

My first introduction to the series.

I hadn’t read any of the previous books before jumping into this one, but that being said, I still enjoyed the book. I’m sure there were continuing/connecting storylines that I failed to understand, but the book overall was enjoyable. It was a small story on a grand setting with interesting concepts and characters, and that’s what kept me going. I did find it peculiar that there seemed to be a lot of set-ups with no-payoffs (his drinking being the biggest point), and I have to wonder if; 1) that’s how the entire series is, or 2) the consequences of his drinking and other various vices/relationships will come into play in the following book(s).

The ending was fine, but didn't make me want to run out and grab the next book.

I thought the narrator was excellent, and was a great fit to the story. I have listened to his narration before, and he is always great. Good voices, and an easy listen.

Did Ancient Relics inspire you to do anything?

It got me into reading more sci-fi novels.

Though I did enjoy the book, I probably won’t be checking out the rest of the series.