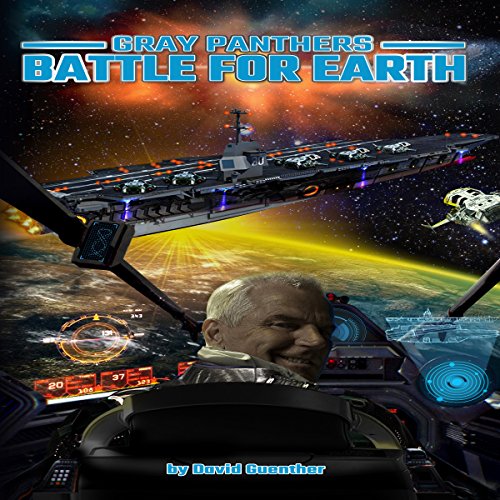 By: David Guenther
Narrated by: Liam Owen
Try for $0.00

America has traded security for liberty following the attack, with the suspension of the Constitution and the Bill of Rights. The Constitution isn't even taught in schools anymore. In this environment, Dan "D2" Daniels, a retired army NCO of the old breed, sworn to protect the Constitution, finds a crashed spaceship and learns that Earth will soon be invaded. Using the technology from the spaceship, Dan forms an army of fellow senior veterans with two missions: first to revive the republic they had sworn their allegiance to, and second to save that republic - and the world along with it.

Their first foray includes converting the CVN-80, otherwise known as the USS Enterprise, a rusting aircraft carrier waiting to be scrapped, into the first ship of the new space fleet of the Gray Panthers.

What listeners say about Gray Panthers: Battle for Earth

30 years after Iran nuked Washington DC and we basically wasted themin response, the surviving government suspended half the bill of rights, confiscated guns, had half the military desert or resign rather than attack US citizens, and seen huge growth in Homeland Security contractors take their place, enforcing the draconian "security". This is the country Dan "D2" Daniels, a retired Army Sgt. Major finds himself. When Dan goes down into an abandoned mine he hopes to find some gold in, he comes across a cavern with a spaceship that has been there for a hundred years. The ship is from a more advanced race that is peaceful, and it tells him that earth will be invaded in twenty years by a viloent alien race. The Ship, called Grub, agrees to help Dan to prepare the Earth, and starts by making him young and healthy again, although his face is still that of a 70 year old man. And so begins the adventure of a lifetime, as Dan starts recruiting old vets into his group to prepare to take the country back from the disease of corruption that has shredded the Constitution, and prepare to defend the Earth from invasion. With a large diverse group of interesting characters, an all too believable setting in a totalitarian Socialist America, and interesting technology, along with pulse pounding battle scenes and close quarters fights, this will appeal to any fan of military science fiction. I can't wait to get into book 2!

I enjoyed this book and intend to buy more. you will either like this book or you won't. I enjoy works that tell off the establishment that wants books to always have business and profits as the villains.

This is a fun tale with a twist on alien elevation of the human race.

I got maybe half way through this story, but couldn't be bothered to finish it

it's a super America story where a lone veteran tries to retake his Homeland from itself. at some points it's clever with imagination and reputable realism. yet for all of that the space portion falls flat and the build up is choked. plus I really hated the whole old face new body deal, kinda threw the whole story out of whack.

I tried but this book just didn't keep my attention span long at all. First it was random garbage [possibly background info] about how Iran nuked the US and the world was in chaos then it just sounded like BLAH...BLAH...BLAH. The narrator sounded like he was preaching about how the collapse happened. After that, I pulled the plug and marked it as FINISHED. It sounded too much like what is happening today or what could happen. Too much hate and strife in the first chapter for me to listen. I just wanted a good Science Fiction book to listen to not a global political meltdown.

I really enjoyed this straight forward space opera. It was a hoot. Loved the characters and storyline. I'm definitely going on to the next one!