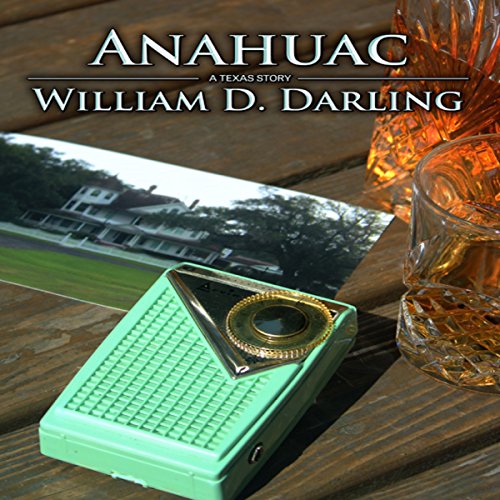 By: William Duane Darling
Narrated by: Alan Adelberg
Try for $0.00

The Anahuac of 1972 is more than just an isolated outpost on Texas's Trinity Bay. It's a place where greed and justice uncomfortably intermingle; where the evangelical fervor of charismatic preachers resonates; where blacks and whites navigate a fragile co-existence; and where a murder leads to even darker mysteries than murder.

Jim Ward, introduced in Morgan's Point as a young, idealistic Houston prosecutor, returns in Anahuac as an older, more conflicted, more complicated man, coming to Anahuac to defend a man who appears guilty of a horrible crime. His discoveries lead to entanglements in the very nature of good and evil, in a town steeped in a history that is unexpectedly but definitively drawing Ward in its narrative web.

What listeners say about Anahuac

A trip down memory lane

I spent my last six years of public school in La Porte, Texas, and this book was just like returning for a homecoming celebration. Loaded with local color from Laporte, Morgans Point, Baytown, and I cannot count the times I drove through San Jacinto battle grounds, by the Battleship Texas onto the Lynchburg Ferry....so many memories came rushing back while I listened to this book.
Alan Adelberg did a great narrative all the way through this book, he has a really calm, laid back, homespun story telling style that I found to be very comforting.
The story is somewhat typical of a lot of small rural texas towns from the 60's thru today, don't trust outsiders, and if they have different values or mannerisms then you really don't trust then, but local rednecks are able to sit on the fence and lean into dirty dealing but that's okay because they are charter members in the good ole boy system.
But the times they are a changing.
This book is a sort of texas heratige, history, courtroom drama, and with a little religion thrown for good measure. Oh almost forgot our hero is married, has a very good looking law partner, and an ex college lover, and is constantly trying to please them all.
I really enjoyed this one ....hope you like it as well.

Mr. Darling Gets the Details Right

When a novel bears the name of a town or a region, that town or region often goes beyond just being the neutral backdrop for the story, and becomes almost a character in the story itself. In such cases geographic verisimilitude takes on added importance. Houston isn't New York, Anahuac isn't Long Island, and it's annoying as heck to listen to stories written by someone who doesn't understand those differences. Fortunately, William Darling is intimately familiar with the settings of his story. The characters aren't the shallow stereotypes of an outsider, but nuanced portraits fashioned by an insider. As someone who grew up somewhere else but who has grown to love this part of Texas, listening to _Anahuac_ was like looking at pictures of a friend taken before you met them. Definitely worth the download.

PRINT REVIEW (Audio Book Review at bottom) : (Five Stars with a caveat*). Anahuac: A Texas Story, Volume 2 is my first print book finished in 2018 -- and it leaves some big shoes to fill for all those that come after it. Perhaps it has a winning edge over others by including three of my favorite elements: Texas, the 1970s, and kick-butt female characters. Perhaps it’s because the story line grabs you by the collar and pulls you right into small town Texas where life is slow moving and change, progress, and outsiders are unwelcome intruders. Perhaps it’s because the story is unconventional in how it unfolds, which is primarily outside the courtroom.

“While the house and Sarita both retained hints of grandness,
their best days were behind them.”

Author William Darling NAILS the setting of Anahuac in so many ways. (As a Texan and child of the '70s, I can vouch for the accuracy.) In addition to rich, detailed descriptions, Darling weaves in historical facts to remind the readers that they are immersed in a different time. Texas was still covered with sprawling ranches and more miles of undeveloped land and shorelines than not. Radio programming was strong, and carbon paper and typewriters were how most people made copies. Racial tensions were high, the Vietnam War was raging, and terrorists marred the Olympics.

“The beauty of this situation was that I could treat her like a man.”

A big part of Anahuac centers around the swirl of women’s rights movements that were happening in the 1970s. Women were becoming a presence in formerly male dominated professional fields, and it wasn’t necessarily a welcome change. I am not sure whether author William Darling intended the story to be so timely. Today women continue to fight many of the same equality demons; some are clothed differently, and others wear the same tired coats from forty (fifty? A hundred?) years ago.

All of the characters in Anahuac are well-crafted and fascinating including an eccentric and independent ranch woman, an evangelical preacher with a shady business manager, an old man with old money, and a small-town sheriff with a big hold over the town. Despite a large cast, Darling does an outstanding job of defining the players and making each unique and memorable and familiar to readers. Readers get not only a clear visual but a peek at what makes these multi-layered characters tick. The female characters in Anahuac are all kick-ass -- every single one. From the first pages where we meet the tough-as-nails Sarita Jo Franklin, to the legal secretary, Alice Ann, and the three powerhouse main women, Cooper, Aurora, and Chinky, readers are treated to smart, independent women who know what they want and are going for it despite the man-made hurdles. One of the reasons readers will love main character Jim Ward is that he shows growth as he questions the status quo, realizes that the women who surround him are on equal footing (or possibly have the upper hand), and embraces the advantages they can offer him personally and professionally. He respects them.

The plot was unexpected and unconventional and a real delight. Anahuac is full of the details one would expect with the main character an attorney and the main story line being his defense of an accused murderer. Rather than being a legal thriller, it’s character-driven and readers don’t spend much time in the courtroom. By the resolution, readers don’t necessarily know who is guilty or innocent, despite how the jury rules. And that’s okay because readers learn so much more and are left with their interest piqued as to what’s going to happen next in the lives of these characters. I intend to go back and read book one in the series, Morgan’s Point, and sincerely hope that there’s a third installment on the horizon.

Anahuac is a top-notch story, and the story deserves a full five stars; however, there’s that caveat*. (Those who regularly read my reviews probably know what’s coming.) There are format issues and the book needs a thorough editing to correct some repeated lines, dropped words, and very basic and repetitive punctuation errors, several of which were glaring to these (Texan) eyes (Ya’ll? No, no, no.). It is common knowledge that I am a freak about all things SPAG. Despite my issue with the issues, that the errors didn’t sour me on the book attests to the quality of the story – it’s that good. I sincerely hope that future editions will be clean to take Anahuac to the next level, where it belongs.

Thank you to Lone Star Book Blog Tours and Orange Cone Agency for providing me a print copy in exchange for my honest opinion – the only kind I give.

AUDIO BOOK REVIEW: Even having read this book several months ago and knowing how it would all turn-out, LISTENING to this story unfold, I was still absolutely glued to it. It is such an excellent and believable plot, and hearing the characters' voices makes it even more enjoyable, thanks to the fabulous narration by Alan Adelberg.

Adelberg’s narration is evenly delivered and -- with the exception of the pronunciation of “voir dire” -- perfectly performed. From the deep Texas drawls to the evangelical preacher to the British female, Adelberg nails the accents of the wide variety of unique characters in the story.

In reading with my ears, I am reminded of how much I enjoy the language that author William Darling uses to help shape the characters and the settings. Now I am even more anxious for the next installment in this series and ready for book one, Morgan's Point, to get its own audio book treatment!