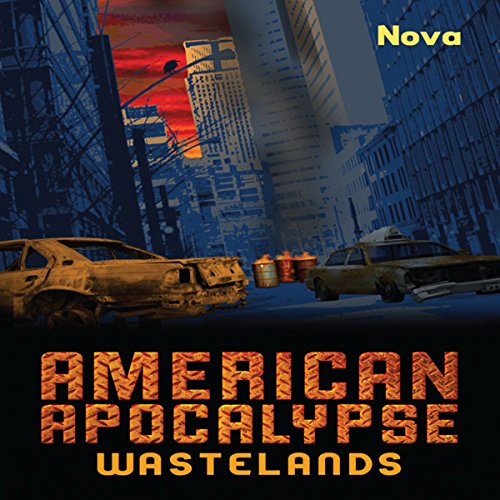 As millions struggle to survive in the wasteland that America has become, a young man fights to maintain its founding promise.

Starvation, violence, and death run rampant in the remains of our once-proud country. Federal troops, commissioned to protect the homeland, have turned their guns on the lawless population. Citizens find shelter in government safe zones while ruthless gangs enforce their will outside the camps.

When the military transforms Washington's life-saving food bank into a gun collection center in order to disarm all but the soldiers themselves, riots ensue. Weary of the militaristic government's intent to render the citizens defenseless, America's remaining patriots begin a mass migration out of the camps in search of refuge.

American Apocalypse Wastelands tells of a young man discovering the role he must play to defend himself, others, and his country as everything around him crumbles.

This book didn't have a lot of reviews and I was skeptical to purchase, I'm glad I did!! It started off a little different but got going relatively quick, the story line was creative and feasible…I particularly liked how the book portrayed the actions of the government and its response to the given situation, it’s par for their current trajectory. I love an action packed book and this book was filled with it, the main character is one crazy SOB…I loved it. I couldn't put this book down. It had one element towards the end that I’m not sure belonged…but the authors note at the end made it palatable. I do enjoy the books that reflect a crisis and the aftermath created by a controlling government. This book rates as one of my favorites…along side “Patriots” by James Wesley Rawles and “Atlas Shrugged” by Ayn Rand.

Just when I thought it couldn't get worse

Would you try another book from Nova and/or Erik Sandvold?

Would you ever listen to anything by Nova again?

Would you listen to another book narrated by Erik Sandvold?

What character would you cut from American Apocalypse Wastelands?

The first book was so bad, but I was invested in the characters, even the horrible, narcissistic, lazy and sex obsessed Gardner. And so I was looking for some redemption with the second book. It did not happen. In fact, I was so annoyed with the other worldly freya, even more so when I heard the authors note, that I had to cut my losses there. I will not be listening to a third, if it is written...

Ok. First off the story isn't bad. I really like the whole apocalypse genre but this book has some problems. The narrator sucks, he reminds me of the band camp chick from American Pie trying to imitate John Wayne. I don't know where that accent comes from but I don't want to go there. Secondly this is not a stand alone book, it is one of a series. If you don't have the first book in the series you are lost. The author never explains what is going on, how things got to be the way they are or how long they have been in the situation they are in. You have no idea who the characters are or anything about them. The worst thing, and that's debatable, about this book is that Audible released it first. Bad move guys.
A couple of good points is that the author is technically accurate. He knows a good bit about the firearms described and I get the feeling he was infantry from the way he describes some of the action. I was impressed that he knew that hiking down hill can be worse than going up, oohrah there devil dog. Another thing in his favor is that the story isn't gun porn, in which the author takes a paragraph to describe the weapon and a sentence for the action. The action itself is good. The hero gets some boo boos once in a while but he seems to walk between the raindrops so to speak and never receives a major wound. Pretty darn lucky for standing out in the open and letting folks shoot at you

The genre is enjoyable

Who would you have cast as narrator instead of Erik Sandvold?

ANYFRICKINBODY!!! This guy shouldn't be a narrator he ought to be a DJ at a nudie bar.

Was American Apocalypse Wastelands worth the listening time?

Loved It! A matter of taste I suppose.

Absolutely, i.e. to those who share my taste in apocalyptic reading. Personally I thought the storyline was quite intriguing; that the characters were entertaining and the action kept pace with my attention. I am not certain what other people expected but I found it engaging and really, really hope "Nova" that puts out a third book and Audible delivers the audiobook. I would be very disappointed if not.

Each character had their own unique personality which I found very engaging but Gardner took the cake, the icing and the platter. He was so casually intense and yet over-the-top humorous. I love all the military and weapon references along with predictable matching of calibers and firearms to each personality. Gardner's Navy single-action was sweet as was the Barrett. All these details really spiced things up and kept me anticipating the introduction of each new weapon with the next escalation in the action.

After listening to both books I just can't image a different performance artist delivering the audio to a third book. I Erik's hear his voice in my head every time I think of any part of the book and especially some of Gardner's hilarious off-hand comments. More fun than a box of 40 cal S&W for about half the price.

I believe it already has its own after the colon ": Wastelands" but I would give it something like "An apocalypse has never been so much fun!" but that sounds kind of lame. I'll try harder.

easily the worst book of it's kind I've heard

What would have made American Apocalypse Wastelands better?

If you like One Second After , Patriots , Survivors you will hate this book.Every character gets a cool handle like Ninja, Knight, Gardener, what is this D&D from the 80's?

Would you ever listen to anything by Nova again?

If he moves past his Dungeons and Dragons days

What character would you cut from American Apocalypse Wastelands?

The whole goddess thing was dumb. The main character Gardener is a bit of a punk.

I started this book could not get past the 5th chapter.

I normally like to listen to the entire book no matter if it is poorly written. I will give the author the benefit of the doubt that the story will improve. Usually that is but not this time. The author needs a lot more writing classes. The story was disjointed and poorly written at that. I don't mind swearing in the narrative. However, to use it as the bulk of the conversation without any substantial point is too much for me. I believe it shows immaturity on the part of the author. Then there was the narrator, he sounded more like a reluctant high schooler reading in English class. Between the writing and the narration, I just couldn't listen anymore.

What would have made American Apocalypse Wastelands better?

Staying clear of the graphic novel sensibility and the screenplay aspirations.

What was most disappointing about Nova’s story?

A narrative that rises above banality only in spare moments when it predicts and describes sociological and economic decay--then relapses back into a lame adolescent male adventure fantasy.

Which character – as performed by Erik Sandvold – was your favorite?

The protagonist is a shallow and simple fool with a gratingly hypocritical moral code--everyone else is two-dimensional.

It credibly envisions some of the details of socio-economic collapse and the government response.

The Apocalypse genre is a little weak artistically across the board. This one, affecting a flippant tone, shuns the usual Evangelical paradigm (no doubt in hopes of appealing to Hollywood).

What disappointed you about American Apocalypse Wastelands?

Narrator was so bad I couldn't continue to listen. Guess I'll have to start a list of sucky narrators.