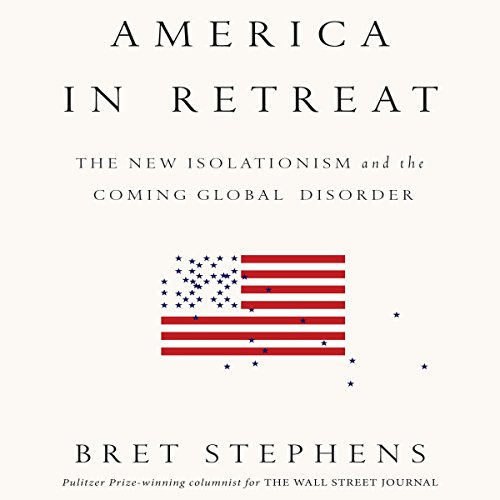 In a brilliant audiobook that will elevate foreign policy in the national conversation, Pulitzer Prize–winning columnist Bret Stephens makes a powerful case for American intervention abroad.

In December 2011 the last American soldier left Iraq. "We’re leaving behind a sovereign, stable, and self-reliant Iraq," boasted President Obama. He was proved devastatingly wrong less than three years later as jihadists seized the Iraqi city of Mosul. The event cast another dark shadow over the future of global order - a shadow, which, Bret Stephens argues, we ignore at our peril.

America in Retreat identifies a profound crisis on the global horizon. As Americans seek to withdraw from the world to tend to domestic problems, America’s adversaries spy opportunity. Vladimir Putin's ambitions to restore the glory of the czarist empire go effectively unchecked, as do China's attempts to expand its maritime claims in the South China Sea, as do Iran's efforts to develop nuclear capabilities. Civil war in Syria displaces millions throughout the Middle East while turbocharging the forces of radical Islam. Long-time allies such as Japan, Saudi Arabia, and Israel, doubting the credibility of American security guarantees, are tempted to freelance their foreign policy, irrespective of U.S. interests.

At once lively and sobering, America in Retreat offers trenchant analysis of the gravest threat to global order, from a rising star of political commentary.

What listeners say about America in Retreat

The Burden of American Exceptionalism

I agreed with the basic thesis of the book before I read it, and this is probably the main reason I wish it were better argued. While the hallmark of a well-reasoned argument is a charitable and accurate understanding of your opponents' positions, which Stephens does admirably, he actually does a better job arguing their points than his own. He does an excellent job describing what he calls the doctrine of retreat, but there's no detailed take-down about why that doctrine is wrong.

The biggest problem for conservatives arguing for an aggressive foreign policy today is Iraq. Initially, Stephens's explanation of Iraq borders on inept, but in the end his point is well-taken. He purports to explain the 2003 intervention by quoting supporters of the war at the time, including Hillary Clinton and other Democrats. Of course, quotes like this don't come close to explaining anything about the reasons for that intervention. He suggests the invasion put other would-be dictators on notice, specifically mentioning Iran and Libya. This is a poor argument. Libya did stop its weapons programs after 2003 and the BBC China raid, but it had been wanting to trade that as a concession since around 1999. In Iran, it seems the invasion did indeed lead them to pause their nuclear weapons program, but that's cold comfort because of the other rogue state he doesn't even mention! North Korea doubled down on its nuclear program after 2003. Why the difference between Iran and North Korea? Primarily because the latter already had an effective deterrent in the form of mass artillery pointed at Seoul, and the US was occupied in another theater, meaning North Korea had plenty of time to build a nuclear deterrent without fear of US military action. Iran had no such deterrent and was right next door to Iraq, so they reasonably feared they would be next. I admit you can argue it both ways, but one thing that's clear is that the lesson to rogue states of a muscular pro-intervention US foreign policy is that if you want to oppose the US, you'd better have nuclear weapons.

While I'm sure Stephens knows all this, it's disingenuous not to address it in the book. He does, though, rightly point out that we can't allow the failure in Iraq to keep us from engaging militarily where we need, any more than we did after Vietnam.

The criticisms of President Obama, though mostly fair, are overwrought and border on ad hominem, the latter framed as the opinions or perceptions of other world leaders, lest Stephens be held to account. One egregious example describes Obama saying that Al Qaeda is in retreat while in fact, according to Stephens, Al Qaeda controls huge swaths of the middle east, including the large northern Iraqi city of Mosul. This is an exceptionally poor line of argument, because he's clearly talking about ISIS, and while ISIS is indeed an offshoot of Al Qaeda in Iraq, the latter flourished because of the US intervention there. This obviously doesn't read to well for a pro-intervention thesis. Further, and this is where I thought the example was particularly deceitful, when speaking about ISIS and Al Qaeda, Obama makes a clear distinction - when he said Al Qaeda was in retreat, he wasn't talking about ISIS. Any intelligent observer would know this, and Stephens is an intelligent observer.

Other criticisms of Obama are right on the money. He notes there have been over 1000 US deaths since the Afghan surge of 2009, and indeed the casualties after the surge have been the heaviest of the whole campaign, though they've lessened in recent years. He suggests Obama committed to a strategy he didn't truly believe in because it offered him a middle ground to fend off hawks and a path to withdrawal after a few years, and spent the lives of American military men and women to that end.

There a sort-of futurist chapter that imagines a world with America in retreat that's interesting but doesn't really go anywhere.

The book ends strongly, with the basic argument being a conservative, Hobbesian view of global politics that requires a Leviathan, and like it or not, the US has to do it because no one else will. He paints an appropriately optimistic view of the US and its future, based on geography, the cultural embrace of innovation, strong natural resources, and a growing economy. This undergirds his view of American Exceptionalism as a simply fact of life, basically saying the US is awesome whether we want to be or not. It's a compelling view. He rightly calls out both liberals and conservatives for their neo-isolationist calls for retreat.

The reading performance is adequate, and easily listenable at faster speeds. Stephens reads the introduction and acknowledgements himself.

The audio motivated me to buy the book.

If you could sum up America in Retreat in three words, what would they be?

This book has helped me confirm my own theories that our country is and has been retreating from our responsibility of helping to make the world a safer place--hence keeping our country safe to pursue our dreams. I only wish I had some way for Bret to impart just a small piece of his amazing knowledge to me. I guess that is what this book did. I will be following him and reading everything he writes from this point forward. If you care about this country, you have to read this book. It helped me to more fully dedicate myself to the pursuit of knowledge, to get involved in reversing this scary trend. Before reading this book I thought I was like many men of generations past complaining about the current generations sins. After reading Bret's book, I feel more confident that it's not all in my head. I AM capable of discerning the maze of political chicanery. Bret, thank you for the years of academic dedication it must have taken for you to amass such knowledge and acumen for world geopolitics. This is the first book review I have ever written (I know, that's sad) because this book is just that DAMN good. My only big question is: where do I go from here? What books do I read next to get more informed without wasting time and energy. I want more of the overall knowledge, comprehension, wisdom and experience of Bret. So I can be armed with the knowledge to help make a difference and intelligently defend what I know in my heart. Thank you...BRET! MORE!

Have you listened to any of Bret Stephens and Sean Pratt ’s other performances before? How does this one compare?

Have not but I will soon!

There are so many I don't know where to start. I am about to listen to the book again and i am certain it will be listening to this book until I have it committed to memory so I can rebuttal the insane, ridiculous comments I hear from people all the time trying to defend a position that is based on non-sense. I have so much of this in my head, but articulating it the way Bret does is beyond my capabilities. His knowledge is so vast and expansive it amazes me. Anyway. The book is incredible. Can't wait to start over again.

Please read or listen or both to this incredible book. But more importantly, after you do, DO SOMETHING about what you read and learn from Bret. Stop posting pictures of kittens and what you ate for dinner last night and start standing up for this great country of ours. My father volunteered at 17 to fight in World War 2 and all the great men who died for our freedom--did they do that in vein. Did they do that for nothing? Our country is slipping away from us. Bret, thank you so much for this book. It touched my heart and opened my mind. thank you. John

This book describes the current global climate in a direct and unbiased manner that enlightens the reader to the crisis America faces when it retreats from the role of preeminence in the world. Great socio-political book!

No, I would not listen to another book if it was narrated by Bret Stephens. He bored me to death. To be fair, he has a lot of good ideas but the reading is horrible. Probably this is a case of a book that is much better read than listened to.

There are no specific characters in this book. So, the question does not apply.

As noted, the author (and reader) is horrible. Very, very boring and monotone ... Only solution would be someone with more experience as a book reader.

Bret Stephens possesses a great mind and the ability to communicate the products of it. He is truly a gifted man. Keep up all the excellent work that you do and God bless.

Loved this insightful & Thor provoking look at American foreign policy interests in the past present & future. Must read for anyone who cares about politics.

story was great, but the reading was very dry.

the story was important, but the narrator sounded like a computer. very hard to retain any of the information because you the lifeless tone that the guy reads.

Greatly increase my knowledge and perspective on American foreign affairs and our place in this world.