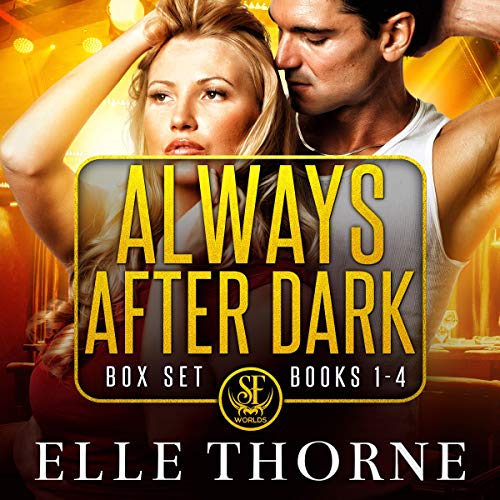 By: Elle Thorne
Narrated by: Meghan Kelly
Try for $0.00

Follow the Tiero family, a group of white tiger shifters, as they head to America to find love...and heart-stopping danger. Full of romance, suspense, and gritty drama, this red-hot collection is sure to entertain!

Remember Vax? He made a cameo in Shifters Forever: Seduction. He’s back!

Shifter Vax Tiero runs After Dark, a nightclub that doubles as a haven for shifters. Man, did he screw up falling for the curvy graduate student Callie Rivera. That’s a no-no because of the Tiero Council Code. One of the tigresses is a furious, petulant visitor whose jealousy puts Callie in danger.

Now, Vax has two problems. Keeping Callie alive and keeping that he’s a shifter secret from her.

Wait. Two? Make that three problems because his half-brother, an equally sexy shifter named Rafe is in from Europe for a visit. And he’s got his eye on Callie. He’ll waste no time going for what he wants while Vax is taking care of After Dark.

Two hot shifter males and a hot-tempered shifter female promise sparks, melee, and drama. The hot sex is a side effect.

Shifter Cy’s sister is missing. He shouldn’t be crossing into Tiero territory to look for her. He should follow proper channels and notify the Tiero tribe. But he can’t. He doesn’t have the time to wait around for niceties and permissions. Until he’s caught. Damn the luck.

It doesn’t help that one of his captors is a beautiful, curvy tigress named Lila. He needs to escape to find his sister, but he hates the thought of leaving the stunning, bootylicious tigress behind.

It’s a Shifter Council meeting. This one’s being held at After Dark. The city’s teeming with shifters. They’re supposed to be cordial, but tensions run high when territorial disputes arise. Curvy tigress Veila has no business falling for Mark Martinez, the alpha of another tribe - a tribe the Tieros have had scuffles with that have lasted several centuries.

Romeo and Juliet’s family rivalry had nothing on Veila and Mark’s families.

White tiger shifter Gavin Castro’s got a job to do. Falling in love isn’t part of it.

The curvy Arctic fox Layla’s on a mission. Keep her secret and catch a tiger...shifter. And not by the tail!

What listeners say about Always After Dark: The Boxed Set Books 1-4

Great series Meghan Kelly does a wonderful narration, very easy to listen to and I will definitely purchase more books by both this author and narrator.

This boxed set contains four stories. Each of them has its own unique little story, yet they linked together by one or another main character. There is love, lust, excitement, and danger. We can see how all beliefs of non-mixing races come in clash with new generation believes and difficulty of overcoming such things.

The narrator made this book even more enjoyable. All characters had their own voices. Moreover, you can hear their different accents and emotions.

This series by Elle Thorne has the same message we should live by today. That being, no matter what cultural race we come from, we should appreciate each other and communicate better instead of exclusion. Meghan Kelly does a phenomenal job narrating all 4 books bringing intrigue and mystery to many of the characters and their shifter secrets.

Vax is the North American Tiero family alpha white tiger shifter. Vax runs the family business which is a night club and a haven for shifters. He's a liberal man that doesn't believe that there should be any discrimination between other shifters. His father runs the European chapter and feels there should be no interbreeding between humans or shifters at all. Then Vax falls head over heels for Callie a human, which causes jealousy between his own team, which also places Callie's life in danger. Then while Vax is away Rafe, Vax's half brother, falls for Rafe also. Vax now has to be worried about the council because he married a human, a kidnapping, and his sneaky brother. The two brothers need to sort their sibling rivalry out before it gets out of hand.

Then Cy a Siberian tiger goes looking for his missing sister also a tiger shifter. Cy's investigation takes him into Tiero territory to look for her only to be interrogated. Since Vax is away in New Orleans on business, Lila is in charge. Lila is headstrong and wants to be taken seriously by the men that surrounds her, so she decides to start investigating the disappearance herself, only to get caught. As Cy and the Tiero family find clues they find more than missing shifters.

Vax decides to hold the first ever shifter council meeting and invite all breed leaders to this meeting. The problem is Vax's father and uncles make an unexpected appearance. Distant relatives are discovered, and other alpha breeds are intentionally insulted and dismissed, causing more disharmony by attempting to enforce the old school standards and policies.

Then the Gavin falls for Layla an artic fox. She was rescued by the Tiero family and has been living with them ever since. Her father (a polar bear) wants her to come back home, but Layla doesn't want any part of the neanderthal ways of her suspected crime-shifter family. Gavin and Layla need to figure out how they feel about one another and what to do so her family doesn't cause problems for the Tiero clan.

I enjoy the depth ET gives each character. Most are very likeable. There is intrigue, danger and romance enough for everyone. Recommend series.

I loved the first story in this boxed set. the second d was ok as for the third and forth well I really didnt enjoy them to much as1 the story really didnt really make me want more . The narrator was ok I didnt really think she was that good. just ok for me