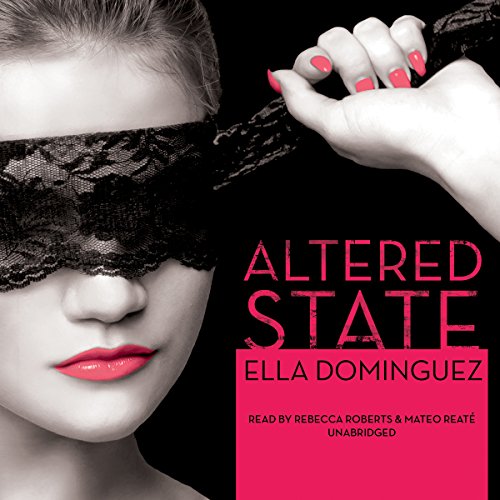 By: Ella Dominguez
Narrated by: Rebecca Roberts,Mateo Reate
Try for $0.00

Beauty lies in the truth. A wife with a thirst for revenge desperately trying to save her marriage while hiding in the shadows of her memories...A woman with questionable intentions, a sketchy past, and a taste for unavailable men...A husband in love with his wife, a man mesmerized by his mistress, a willing hostage caught between two obsessive women. A murderer, a liar, and a cheater. You think you know which one is which, but nothing is as it seems. After all, everyone wears a mask. Some are just better at hiding the truth than others. Lies will be exposed. Truths revealed. Blood shed. All in the name of something far more potent than love and much more toxic.

What listeners say about Altered State

I received a free Audible audiobook in exchange for my review.

STORY:
Ella Dominguez hit a home run with Altered State! This exciting, suspenseful, sizzling hot erotic romance had me on my toes, guessing at what was going on from page 1! This truly is a story unlike anything I've ever read which impressed the hell out of me since I read a LOT of books! Not only was the plot unexpected, it was well written. Because of Ms. Dominguez's remarkable character development, I felt like I, "met" some new people. At times I'd forget that I was reading a fictional book, the characters becoming companions who were sharing their personal stories with me.

Not only did Dominguez hit a home run with Altered State but she also proved that she's capable of throwing some incredible curveballs! Early in the book I thought I knew what was happening, certain that this book was going to be predictable but I was so wrong! The twists in this book are mind blowing and come when you least expect them! Altered State is a great mindfuck that readers of all genres will enjoy! With mystery, romance, secrets, suspense, passion, crime, obsession, lies, love, heartbreak and more, there really is something for everyone in this book!

REBECCA ROBERTS' PERFORMANCE:
99% of the male character dialogue was narrated by Mateo Reate while the remainder and majority of this audiobook was narrated by Rebecca Roberts. Ms. Roberts' performance was great, making it clear that this was not her first time recording an audiobook. Throughout the recording, she was able to produce just the right amounts of emotion, pause for just the right amounts of time and kept her tone of voice and volume at just the right levels. Because she was able to create two distinct voices, Ms. Roberts made it easy for listeners to decipher between the two female main characters. Ms. Roberts is a talented narrator capable of bringing the characters and the story to life! She's fun to listen to and she makes narrating seem like a piece of cake!

MATEO REATE'S PERFORMANCE:
It took me over 90 minutes to write this review, attempting to use the least hurtful, derogatory words possible while still being 100% honest about Mateo Reate's performance. Despite the time and energy spent, the truth is that I've never heard a performance worse than Reate's (& I've listened to 40 approximately audiobooks during the past 5 years).

Prior to hearing Mr. Reate's voice, I unknowingly had become immersed in the story, lulled by Rebecca Roberts' voice. Unexpectedly and suddenly, Reate's much louder, much deeper, extremely jarring voice, "boomed" in, literally startling me so much that I physically jumped! Never have I experienced anything like that! Even after listening to several chapters, Mr. Reate's voice continued to startle me. Just when I'd become consumed by what I was listening to, Reate's painfully loud, monotone words would disrupt the flow of the story, reminding me that I wasn't actually watching a movie play out in my mind but was listening to an audiobook. His excessively deep and loud voice was intrusive and overpowering, especially when coupled with or compared to Rebecca Roberts' softer, more believable voice. In addition, Mr. Reate always sounded like he had excessive amounts of mucus or drool in his mouth, his accent sounded fake and his tone was flat with zero emotion during the first 95% of the recording. Initially, I wasn't sure I'd be able to continue listening to the audiobook, forcing myself to keep listening. At one point, I was so baffled by Reate's voice that I played a few seconds to my husband who commented, "what do you expect from a computerized text to speech app?" When I informed him that what he'd just heard was a professional, paid narrator, he didn't believe me!

Thankfully, by chapter 9 I had acclimated and wasn't physically startled by his voice anymore. By the time I reached the very end of the book, Mateo began showing signs that he could add small amounts of emotion to his voice. Unfortunately, also at the end, there were some audio issues. In the very last chapter I could hear when Mateo's recordings stopped and new recordings began. This wasn't a huge issue but it's something Mr. Reate will hopefully be able to improve upon should he continue recording audiobooks. I would also highly recommend that he take some acting classes and voice coaching if such a thing exists.

Hopefully, Ella. Dominguez will write an epilogue or additional stories about Zeke and Miranda but if she does, and she has Mr. Reate narrate again, I will bypass the audiobook and choose e-book format for sure.

There were a few times towards the beginning that I almost gave up but only continued on because of the previous reviews. I am glad I did listen to the whole thing. It did end up being an intriguing story. As others have said I was off put by the male narrator but he did grow on me over time.

Very good in many ways

This book was surprisingly good. The story was exciting and exotic with good potion of drama. I consider listen to it again. It is also very well Narrated. However the male voice could be better chosen, but you get quickly used to it. It has my best recommendations.
I thought it was mostly 'Girls books'. But even as man, I really like it.