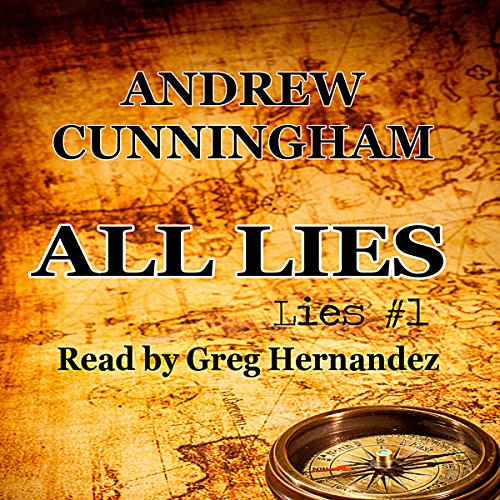 By: Andrew Cunningham
Narrated by: Greg Hernandez
Try for $0.00

"I come from a long line of idiots."

Those were the last words his father uttered before dying, and from what he knew of his family tree and the unfortunate end that came to so many of his ancestors, Del Honeycutt couldn't disagree. What he didn't know was that his family held dark secrets - secrets that were about to come crashing down upon him.

A seemingly innocent date gone tragically wrong plunges Del into a web of murder, lies, greed, and a hidden fortune dating back to a crime committed 85 years earlier by his great-grandfather. Accompanied by Sabrina, the sister of Del's brutally murdered date, a violent journey of discovery and fear begins. Pursued by vicious killers intent on eliminating anyone with knowledge of the 85-year-old crime, their only hope of survival is to find the reason behind the original crime and why, decades later, someone is still willing to kill to keep it hidden. But Sabrina is concealing a monstrous lie of her own. Is she who she says she is?

By the author of the Amazon best-selling thriller, Wisdom Spring.

What listeners say about All Lies

Better then I thought it would be

I honestly liked this, I was not sure going in that I would, but the plot was all it said it would be, and much more, so much is going on in the story and the ending is quite good.

I think each chapter has something to offer readers and its worth a first and second read. All the main characters are interesting and each piece of the story from the history to the relationships and secrets brings something to the story, little if anything takes away from it. I will say that the narration was one of the better ones I have heard from the site, the female voices were somewhat limited but most he made work for him and overall the action was well done and I love how he made the story come alive.

I got a free copy of this book in return for my honest review.

This listen was a thrill ride

This book was a great mystery thriller with a little history lesson thrown in for good measure.(Seriously, how did I graduate - from college no less - and never know there was a place called Fordlandia!)

The quest to solve the mystery took the main character, Dell, and his instalove on a series of adventures, all while staying just one step ahead of nefarious men on a mission. There was depth. There was inner turmoil. There was the constant threat of murder and mayhem.

The narrator was good. I appreciate that he did not try to force a female voice. He managed to give two different personas without forcing a cringe-worthy falsetto for the female lead. I tip my tiny invisible hat to Hernandez.

The ending wasn't even remotely predictable. It made perfect sense, but I had it going many different ways, none of them even close. There are very few things in the book world more fun than that.

Mystery with a twist

Great mystery with some history thrown in!! Great story from start to finish. Greg Hernandez did a great job with the narration. I was given this free review copy audiobook at my request and have voluntarily left this review.

I really enjoyed All Lies. It was a fun mystery with plenty of thrills, close calls and a tough no-nonsense woman helping Del figure out who done it, what did they do and where'd they put the loot. Del and Sabrina encountered a very interesting cross-section of humanity. I loved every twist. Friends and foes swap sides in unforseen and sometimes humorous ways reminding me of the best parts of The Pirates of the Caribbean.

You've got to give this a listen. It'll keep you entertained until the very end where at last, the entire twisty tale has been unraveled. Simply wonderful. Greg's performance was great. He brought the characters to life and Grace them free rein.

This is a 5 star listen.

Intriguing mystery and great characters. Great narrator too! I received a free review copy of this audiobook at my request and I have voluntarily left this review.

Secrets in an old attic lead to a treasure hunt, romance, and murder in All Lies. It is a fast paced, exciting story with lots of surprises. Love how the author ties the characters together. So many connections, so many possibilities...And all going back generations because of one crime. I listened to it in one day! This book was given to me for free at my request and I provided this voluntary review. So pleased for the opportunity.

I really enjoy non-stop action books. I loved how the author included some treasure hunting mixed in with murder, mystery, historical items, and a great art heist. The storyline is a little unbelievable but is such a fun adventure with all of the twists and turns. I thought the narrator did an awesome job with the various characters and distinguishable voices. Having seen some original Faberge' Eggs in Russia and knowing they are worth multi-millions added to the story for me. I was impressed with the imagery that was written into this book as well. I requested this review copy audiobook and have voluntarily written this review. I will definitely listen to more books by this author and narrator.

I enjoyed listening to All Lies. The story was well-rounded and suspenseful. The characters were good, especially Del. The plot with the missing painting was interesting and exciting. Andrew Cunningham has proven to be a good, consistent author.

Greg Hernandez' narration was okay. He has a great voice when not in reading mode. The listener can tell it's being read word for word. I don't know the fix for this. It needs more voice inflections and should sound like voice acting rather than plain reading.

This is a mostly plausible, if not totally believable suspense story with some action adventure and colorful characters. Greg Hernandez embraces the first person Narrator of this story, Del, and makes him his own. His performance is quite satisfactory. It kept me enthralled through to the end.

a great story full of memories