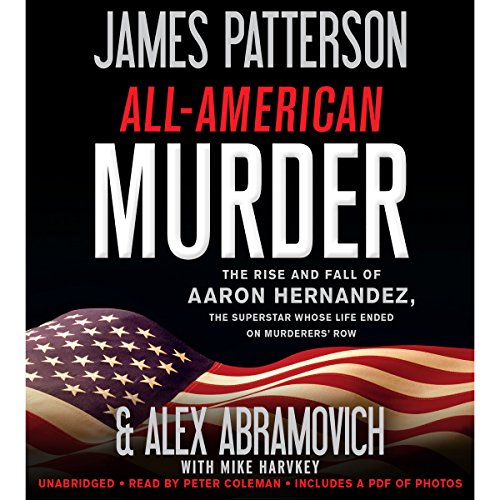 By: James Patterson,Alex Abramovich
Narrated by: Peter Coleman
Try for $0.00

He was a college All-American who became the youngest player in the NFL and later a Super Bowl veteran. He was a star tight end on the league-dominant New England Patriots, who extended his contract for a record $40 million.

Aaron Hernandez's every move as a professional athlete played out in the headlines, yet he led a secret life-one that ended in a maximum security prison. What drove him to go so wrong, so fast?

Son of a University of Connecticut football hero known as "the King" and brother to a Huskies quarterback, Hernandez was the best athlete Connecticut's Bristol Central High had ever produced. He chose to play football at the University of Florida, but by the time he arrived in Gainesville, he was already courting trouble.

Between the summers of 2012 and 2013, not long after Hernandez made his first Pro Bowl, he was linked to a series of violent incidents culminating in the death of Odin Lloyd, a semi-pro football player who dated the sister of Hernandez's fiancée, Shayanna Jenkins.

All-American Murder is the first book to investigate-from the unique vantage point of the world's most popular thriller writer-Aaron Hernandez's first-degree murder conviction and the mystery of his own untimely and shocking death. Drawing on original and in-depth reporting, this is an explosive true story of a life cut short in the dark shadow of fame.

What listeners say about All-American Murder

Sadly, I had to stop listening...

What would have made All-American Murder better?

In all fairness I stopped listening after 10-minutes. Although the topic was certainly interesting (and I live in New England,) the narration ruined it. The narrator sounded like a computer, and had little to no inflection. I don't know if it was just how he read the short chopped sentences, but it was irritating and I had to stop. I guess I'll have to find time to read the paper version of this one.

Not what I thought it would be

I learned nothing new and Patterson somehow managed to take a fascinating story and reduce me to tears of boredom reading it. I stopped and returned it 2/3 of the way through because if I had to endure the desperately white narrator reading one more text between Aaron and one of "his boys" I was afraid my eyes would roll so far back into my head I'd lose them forever 🙄

This book was literally taken from news paper articles you could have taken 5 minutes to read. Not a best seller , not any info we didn’t have already not a good read

Why is this so interesting

I gulped down this book. Sad story but too much football and too little everything else. Urban Meyer is in the news right now, getting someone off the hook and covering for more bad behavior for jocks who can do no wrong ,,,until blatant senseless murder... After murder.

Football or University of Florida fans

Reader was too flat

Wish I had my money back

Informative...if you've been living under a rock!

This was my FIRST and LAST attempt at Patterson. This was literally a collection of news quotes and interviews strung together into a narrative. There is almost nothing new to be learned here and absolutely nothing you couldn't obtain by spending an afternoon at the Google machine.

I am a voracious reader, and I favor horror and true crime. It doesn't take much to file a FOI and obtain the court records, but this is a sad example of a NYT "top 10" author capitalizing on a tragic and violent story. The victims (including Hernandez's wife and baby) were not given the honor of a back story. You would think an author with the resources of JP would dig up some really interesting facts, antidotes, or something...but no.

Don't waste your time, you WILL end up returning it so save yourself those 7.5 odd hours reading it, being disappointed like I was for not taking the prior reviewer's advice, then waiting in a queue to return the credit. Get the newest M. William Phelps book! He is a way better author and underrated

Not a true and accurate account of the person to which this book is written. I was disgusted by the portrayal.

Great book, Enjoyed reading the story very serious I think they are more situations like this in the NFL. I truly believe he had a problem read

The story was very interesting but I wished I had taken notes! Very hard to follow not knowing who the main characters were. I was thinking Aaron Hernandez was schizophrenic but didn’t find out till very end what was happening to him and why. Take notes....every single name mentioned and what they had to do with Aaron Hernandez. It will be much more interesting.

Sad Tale of too much money

This book was good but it is the same story we already knew. He had too much money and fame went to his head. Aron Hernandez was a sad tale. Fame and money and too many hits in the head made for bad judgement. NFL really needs to figure how to not let this happen again.