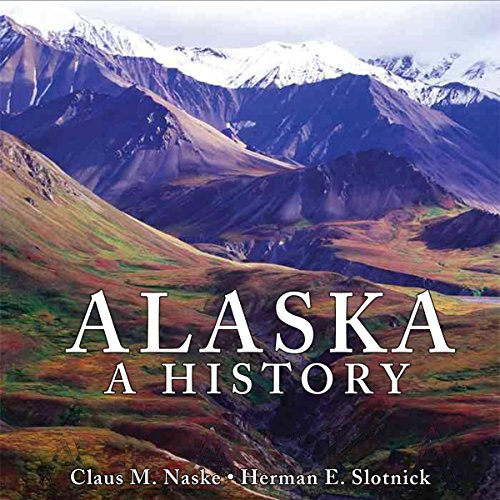 Alaska: A History begins by examining the region’s geography and the Native peoples who inhabited it for thousands of years before the first Europeans arrived. The Russians claimed northern North America by right of discovery in 1741. During their occupation of “Russian America”, the region was little more than an outpost for fur hunters and traders. When the czar sold the territory to the United States in 1867, nobody knew what to do with “Seward’s Folly”.

Mainland America paid little attention to the new acquisition until a rush of gold seekers flooded into the Yukon Territory. In 1906 Congress granted Alaska Territory a voteless delegate and in 1912 gave it a territorial legislature. Not until 1959, however, was Alaska’s long-sought goal of statehood realized. During World War II, Alaska’s place along the great circle route from the United States to Asia firmly established its military importance, which was underscored during the Cold War. Then, the discovery of huge oil and natural gas deposits gave a measure of economic security to the state.

Alaska: A History provides a full chronological survey of the region’s and state’s history.

Published by University of Oklahoma Press.

“An unmitigated triumph. . . . A book that will effectively tell Alaska's story for some time to come.” - Alaska History

“This is a must-read for people who want to understand Alaska today and the course the state is taking toward its next chapter.” - Fran Ulmer, Chair, Arctic Research Commission, and former Chancellor, University of Alaska Anchorage

What listeners say about Alaska: A History

A good - not great - overview of AK history

On the whole I thought this was good - I’d like to pick up the book as I feel it would be stronger than this production, which was fine except for some repetitive mispronunciations of Alaska place names and people, sometimes bafflingly mixed with closer or correct pronunciations of the same words in close proximity.

For in depth history

Not easy listening but in depth info on the political history of Alaska, our biggest state.

I question whether or not this was read by a human being.

The book seem to be very thorough and well written, but the narrator however should have learned native pronunciations of places and people, as an Alaskan It was hard to follow the story because pronunciations were incorrect. Only made it to chapter 7, had to stop listening.