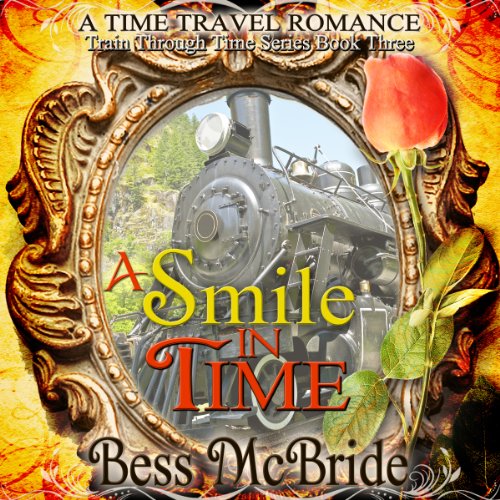 A Smile in Time

By: Bess McBride
Narrated by: Susan Hegarty
Try for $0.00

Annie St. John and her sister, Marie, decide that the three-day train ride from Chicago to Seattle to catch their Alaskan cruise was a bit too much, and they swear that next time, they'll fly. But “a bit too much” doesn't begin to describe what they find when they wake up from a short doze on their sleek modern train.

Over a hundred years before, Rory O'Rourke heads back to Seattle from a photo shoot in Montana on the Oriental Limited. When a young woman in tight clothing called ‘capris' falls into his arms, Rory finds his hands full with not one, but two young women who claim they must have traveled back in time. Rory scoffs at the idea, but his innate chivalry will not allow him to resist the pleas of the young women for help.

Book Four of the Train Through Time Series coming 2013

What listeners say about A Smile in Time

Two sisters, Annie and Marie St. John can not believe what they are seeing and hearing! Traveling through time is just not possible. With the help of Mr Rory O'Rourke who's chivalry would not let him leave the women stranded. One sister is quite anxious to get back home while the other is falling for Mr. O'Rourke!

A very fun and easy listening story of romance and the history is very interesting and informative!

A Smile in Time
A Train Through Time Series, Book 3
By: Bess McBride

The time travel train transports Annie St. John and her sister, Marie to 1906 Seattle in the company of Rory O'Rourke, whom the met on the train. The ladies attempt to fit in to the past while trying to find a way home. Marie wants to go back as soon as possible, to her fiancee. Annie, not so much. They meet up with earlier travelers and learn the secret, but by this time Annie and Rory have fallen in love. The ups and downs and all around journey is a sweet clean historical fiction romance.

The narration was well done. The characters were well portrayed. Susan Hegarty gives each character their own personality.

rory from the previous book is the male lead in this 3rd story.. he doesn't have one young woman to contend with but two who are sistersi <
I like the way the author has put some of todays language in which the Victorian/Edwardian gentlemen don't understand and it goes to other way too. an added bonus is there are the couples from the earlier books too.
another enjoyable story