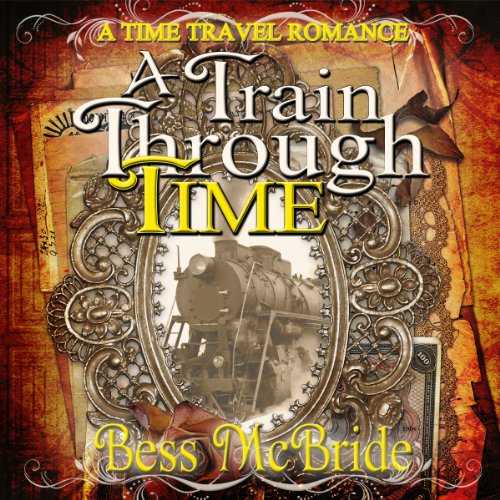 A Train Through Time

By: Bess McBride
Narrated by: Joseph Antone
Try for $0.00

College teacher Ellie Standish thinks she's on a sleek modern train heading to a conference on women's studies in Seattle, but she awakens from a night's doze to find herself on a bizarre historical train full of late Victorian era re-enactors who refuse to come out of character. When the leader of the group-handsome, green-eyed Robert Chamberlain-finally convinces her the date is indeed 1901, a skeptical Ellie rejects any eccentric theories of time travel and presumes she is smack dab in the middle of a very interesting historical dream.

She turns the directorial reins of her dream over to smitten and willing Robert, only to realize that dreams cannot last forever. Someday, she must wake up to reality, though Ellie no longer has any idea what reality is. She only knows that Robert must play an important part in her future. But how can he... if he's only a figment of her imagination or worse yet... a man who belongs to an era long past?

What listeners say about A Train Through Time

Bess McBride pens a fun, humorous, sweet, clean romance. This story has a lovely flow, wonderful descriptive detail and great banter between Robert and Ellie. You can’t help but feel them falling in love.
This is a five star story & I highly recommend it.
In the future I would love for Ms. McBride to choose a different narrator. Mr. Antone has a pleasant voice, but there is no performance in his narrating, which was very disappointing for me. He reads this story as one would do a reading at a bookstore. However, the story is very well written & stands its own regardless of the narrating. Once again, he does have a pleasing voice, just doesn’t perform the characters. Overall, I highly recommend this story.

A Train Through Time
By: Bess McBride

Ellie is traveling by train from Chicago to Seattle for a conference. Somewhere during the night she passes through a time portal and awakens in 1901 on a different train. That is where she meets Robert. They begin an exciting adventure while trying to see if she will stay in the past or will be flung back to her own time period. The listener will travel along watching to see if the budding romance will happen, or will reality come between them. This is a good start to this series.

The narration was well done. The characters were well portrayed. oseph Antone's voice was very complimentary to this story!

Romance through the Times

Ellie Standish thinks she's’ on a train headed to a women’s studies conference in Seattle, but when she wakes from a nap she finds that she is suddenly on a historical train full of Victorian-era reenactors. Or so she thinks. She meets Robert Chamberlain who finally convinces her that she is in really in 1901. He believes she has traveled back in time, she believes she is dreaming. While they spend more and more time together they start to care for one another, but Ellie believes this will all be gone soon and she will hurt Robert so she runs away from him. Will Robert be able to make Ellie believe she belongs with him no matter how long they have together?

I really enjoyed this book. The characters had wonderful chemistry together, so much that you hoped that everything worked out for them to be able to stay together. The time-traveling was an interesting concept on how to bring these two people together. The ending was a nice surprise. This is a fun read. I like that Ellie is a strong female who is a feminist who finds herself in the 1900s. Ellie's view on what women can do and who they are to be treated makes for some interesting discussion between Ellie and Robert.

I listened to the audio version of this book. The narrator did a great job with the characters. He really gave each character their own voice and brought their personality through. I enjoyed his tone and pace, I was able to just put on my headphones and listen to the story while cleaning the house or sitting in my “reading nook” and resting.

If you like historical time travel romance this is definitely for you. I look forward to seeing how the series continues. I receive a complimentary copy of this book. All thoughts and opinions are my own and in no way have been influenced.

Elle takes a train trip and falls asleep but wakes up in another time. Her descriptions of the people on the train make you feel like you are there with her. A little mind twisting as she wakes up again in her own place and time! Very interesting to listen to!

I listened to the audio version of this book.
A Train Through Time had an interesting plot and characters. I loved the concept of Elle going to sleep on a modern day train and then awakening on a train in 1901 to a gorgeous man. The plot wasn't exactly a page turner, but it certainly had enough twists and turns to keep you guessing. Will Elle stay in 1901 with Robert or will she awaken in her own time with the fiancee she no longer loves? Ms. McBride really does an awesome job of surprising the reader.
The narration of this book wasn't as strong as it could have been. It wasn't bad, but it wasn't one of my favorites either.
I was given a complimentary copy of this audio book. All thoughts are my own.

Too little story - far too much whining

Poorly researched... Annoying the way the heroine just kept complaining about her time travel. Couldn't really engage in the story... He was likeable she was not. Perditiable trope...

I loved this book of time travel. The author did a great job of researching. You could really imagine yourself falling asleep on a train and waking up in another time. The narrator did a great performance of all the characters. Great listen. I will listen to it again.

The story is not complex, but the Edwardian era was well portrayed.

I wasn't sure I liked the narrator in the first chapter, but he got into stride and I enjoyed his performance.

I really enjoyed the story overall. The good stuff first intriquing concept traini as the literal time travel vehicle was brilliant. I felt through the descriptions I could really see it through Ellie's point of view. It was great to step back through the veils of time. However, the back & forth from past to present times with her fiance didn't flow as seamlessly for me and as such there were a few disconnects with story. They didn't spoil the story for me...but that and at times the narrator voice/ delivery was distracting. I can certainly recommend this as a very enjoyable book and will most likely continue reading the series.

elle boards a train in the present, falls asleep and finds herself in 1901. she doesn't believe it even when Robert gives her a newspaper with the date on it.
this story goes between past and present. the past she thinks is just a dream.
well written as you are with elle as she cannot understand where she is in the beginning and hoping everthing comes right in the end.
enjoyed the story very much.
I am looking forward to the rest in the series.