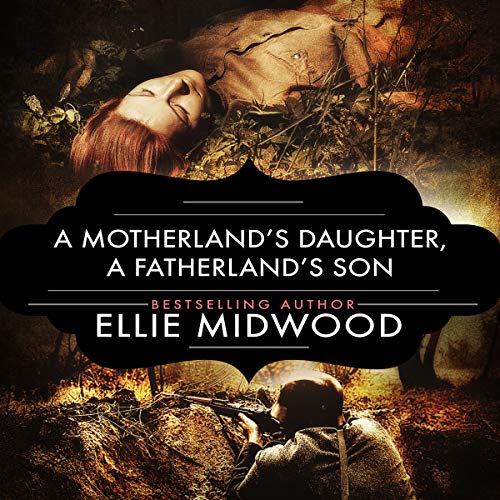 By: Ellie Midwood
Narrated by: Kylie Stewart,Eric Rolon
Try for $0.00

Poland, 1939. A country torn by the occupation of two unlikely allies - Nazi Germany and the Soviet Union.

On the border of this newly divided territory, a young Wehrmacht Unteroffizier, Werner, and a Soviet military interpreter, Kira, meet and fall in love against all odds. Both forced into the military against their will, they wish for one thing only - a peaceful life together.

Everything is set for Kira to defect and marry Werner...but the German army invades the Soviet Union, and now the two lovers are forced to fight against each other on the opposite sides of the frontline, trying to keep their humanity as more and more atrocities are committed by both armies.

They have to decide if their love is stronger than the devastation surrounding them or succumb to the hate as sworn enemies should.

Partially based on true events, this novel will take you on the unforgettable journey through war-torn countries, where hope can be lost in no-man’s-land and one will have to go to great lengths not to lose sight of it.

What listeners say about A Motherland's Daughter, a Fatherland's Son

The core of this book is the touching Romeo and Juliet romance between Kira, a young Russian girl, and Werner, a German boy. When they first meet in 1939 Poland, their puppy love is filled with hope and naiveté. Germany is Russia’s ally, and although the two teens come from different countries, different cultures, they feel they are forever destined to be together. Not so, apparently. As they both go their separate ways, innocently swearing they will not forget one another, Hitler reneges on his pact with Russia and abruptly, Kira’s and Werner’s worlds are turned upside down. Werner is slated to invade Russia, and unbeknownst to him, Kira takes on a dangerous mission. Great detail is given to the harsh realities of war––the Siege of Leningrad, the unexpected fierceness of the Russians fighting the onslaught of Nazi soldiers, whether it be in the cities or out in the dense forests. So detailed are Midwood’s descriptions, I felt as though I, too, marched, hid, or suffered along with both sides; heard the blasts of weaponry; saw the horror of the maimed and killed; felt the rain, mud, bitter cold, and the crunch of snow. And ultimately, also witnessed the dehumanization of people and their souls. As the author writes, “They all want blood and revenge––anything just to soothe that bloodthirsty monster that has awakened in each and every one of us.” Truth be told, as I turned the pages I kept wondering: How could their faraway, diminishing love possibly win out, mired as it was in such horrific circumstances?
And what a treat it was to listen to the two narrators, Kylie Stewart and Eric Rolon, whose voices blended perfectly to make the story absolutely come alive. Excellent

This is narrated by a duo, so all the male characters are told by Eric and Kylie does all the female. It makes the story feel more natural.

This was actually my first book I read by Ellie Midwood and it blew me away.

I was reading this book on a warm sunny Sunday afternoon with goosebumps all over my body. It is a very intense, realistic and harrowing tale of two young people forever changed by WWII. It easy to forget that most of the soldiers were just kids going to war with hope and dreams until the gruesome reality hit. It is shows the horrors and the toll it takes on the soul, but there is also hope and kindness in the most unexpected places.

My knowledge of history is fairly good, but not so great that I can know offhand how accurate this is. That said, the entire story rang true and it pulled you in.

Some of the heavy lifting was done by the dueling narrators, both of whom were outstanding. I had a clear favorite by the end, but both were great. Their dialogue flowed well and they were able to seamlessly transition from character to character, and gave the proper pronounciation to words of the region.

So unusual, but in the best way possible!

I'd never heard an audio book that actually had the male and female lines in each chapter read in a male or female voice!
To explain this a little better, in Kira's chapter, all male lines are read by the male narrator.
Unusual, and it caught me by surprise the first word I heard, but after a minute it became my favorite! I already loved this story, but hearing it out loud was so moving. Definitely one of my favorites!

A moving and powerful story

Historical (and namely WW2) fiction is my favorite genre and I’m so glad I came across this audiobook! Few books show the war from the Soviet/German side, and that’s what fascinated me in the first place - the original concept and point of view that it offered. When I realized that the story is told from alternating perspectives (Kira’s and Werner’s) I started enjoying it even more as it helped me related to both and understand the motives of each.
The conflict itself is described with marvelous precision and truly brings history to life through an unimaginable amount of research that must have gone into it. Two opposing ideologies, two armies fighting with the ferociousness of wild beasts, and two young people who find themselves as enemies despite their deep, unwavering love for each other. I could only hope for the good outcome and was dreading the end if I’m completely honest.
A truly powerful, beautifully written and meticulously researched story. Both narrators did a great job. I’ll be recommending this to my fellow history lovers.

Compelling from the beginning

Brilliantly researched. The tale is brutally honest as the time and the place itself. The characters real and authentic. And though the story has a happy ending, the aftertaste from the portrayals of the ugly horrors of the War is overwhelming. Heighly recommended.

This was a fascinating story. It captivated me from start to finish. Ms. Midwood's writing made it such that I felt Kira and Werner's emotions throughout the story. The narrators did a fantastic job. If I could give this 10 stars, I would.

Try to Imagine yourself making these decisions!

When neither side is right and brutality and evil are the common link, where do you decide your alliances? And mix in love. Many twists and turns and real life accounts of brutality that happen on the Soviet side and the Nazi side. I questioned my own values and tried to imagine what I would have done in many of these situations. I just don't know when both sides are wrong - who is more wrong. A brutal war and psychological war of the mind. Excellent Narrator!

A story that needed to be told

This is the most beautifully written anti-war novel I have recently come across. Make no mistake, the war is there, in every chapter, devastating, raw, and painfully real, but it opposes something much stronger than death itself, which surrounds our two heroes - love. It's not a love story and it is. It reminded me of Remarque and his writing a lot. It's also a reminder of how each of us can turn into an animal under the right circumstances. Both main characters are extremely strong people and I must admit, my admiration for Kira, a female sniper on the frontline, grew with every passing chapter. What is also important about this novel is that it's presented through the eyes of two ordinary people, a young German man and a Soviet girl, who didn't want to have anything to do with war yet found themselves on the opposing sides of the frontline. The amount of research that went into this novel is astonishing. Russian and German expressions dotted throughout the narration only added authenticity to an already splendid story. Also, I loved that there were two narrators and not one. Most enjoyable audiobook!

Really Writing and even Worse Narration

Where to start? First, the writing is dreadful. It sounds like it was written by a moony fourteen year old. Full of awful similes and totally unbelievable melodrama and coincidences. (How many times can two soldiers on opposite sides of the war "cross paths?") But even worse than the writing is the narration. The male is bad, but the female is the worst I've ever heard (in over 250 audible books). She sounds 12, does nothing but read, and doesn't even pretend to be in character. All her characters sound exactly the same. Neither narrator even tries an accent (hello, these are Germans and Russians), but probably the worst part is the constant mispronunciations. And, I don't mean big complex words-- I mean everyday 2 syllable ones! If the narrators are sixth graders, they get a B+. Anything older than that, they totally fail. I can't imagine they really make livings at this. ( And excuse me, but did the book OR the recording really have an editor? Didn't sound like it.)

Not great, not terrible.

Unfortunately I felt like this story lacked depth, there was not much character development outside of the two main characters and it felt quite rushed and a bit disjointed at times, it lacked any twists or turns and was very predictable. It got me through a couple of days at work. The overall story was fine and could have been amazing if it had been given more fleshing out but nevermind!