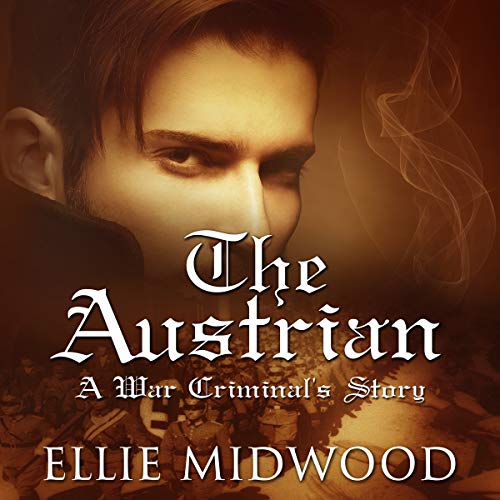 The Austrian: A War Criminal's Story

By: Ellie Midwood
Narrated by: Jonathan M. Matthews
Try for $0.00

What is going through the mind of a war criminal, tried by the International Military Tribunal at Nuremberg? Regret for his atrocious actions? Frantic desire to defend himself to the end? Desperate longing to be forgiven by his former enemies or craving of human kindness, even though he knows that he doesn’t deserve any… And the strongest of all, the fear to never again see the one, who he risked everything for, the only woman that he still continues to live for.

All this is only the tip of the iceberg in the myriad of emotions for Ernst, former leader of the Austrian SS incarcerated in Nuremberg prison, who already knows what fate awaits him. Day after day he recollects his life, trying to understand where he made that wrong turn that changed his whole life and brought him into service of his new masters, who soon dragged his whole country into the most blood-shedding war in history. With agonizing sincerity he analyzes his past, which made him, a former promising lawyer, into a weapon of mass murder in the hands of his new leaders.

Self-loathing and torturous doubts are plaguing Ernst’s mind, which together with unwanted hopes for salvation, terrifying visions of the nearing end, and ghosts from the past turn his incarceration into a never-ending nightmare. And yet, at the very edge of the abyss, he’s still clinging to life, because a woman is waiting for him, a woman, whose secret he’s still carefully guarding, and the one who he still hopes to see.

What listeners say about The Austrian: A War Criminal's Story

Amidst the 1946 Nuremburg Trials, THE AUSTRIAN opens with Ernst Klantenbrünner, having received his sentence to hang, literally falls to his death! I was hooked! Where was Widwood going to go from there? I wondered.

Much enhanced by the well-done narration of Johnathan M. Mathews, I soon found out. Using a peel-the-onion-back-slowly technique, the author very cleverly shows us, step by step, how and why this man became the man he was, and how he got to the place where he ended up. We travel to his innocent childhood in Austria, where his harsh, domineering, anti-Semitic father rendered him vulnerable as well as planted the seeds of prejudice. Back to his Nuremburg cell we travel, where he discusses his life’s journey to a sympathetic American psychiatrist. Once again, the onion peels back to his first foray into sex, coupled with passionate college students welcoming him into an earlier version of Hitler’s National Socialist Party, thus seguing into the famous Beer Hall Putsch event. As the book continues to go back and forth, the love of his life emerges, a married woman who isn’t who she seems (the author carefully explains how she is fictionalized at the back of the book). However, real associates do filter in and out, such as Himmler, Ribbentrop, Heydrich, Göring and Albert Speer, all contributing to the tough psyche Klantenbrünner has so developed so completely––a psyche he ultimately regrets. Excellent!

Wonderful audio of a wonderful story...

Having previously read this novel, to listen to the audio was great! Ellie Midwood's novels are all well-written and thoroughly researched. I loved the voice the reader gave to Ernst Kaltenbrunner.

I read this book a couple of years ago. I really enjoy reading Ellie's books

This is a book that what keep you thinking and asking yourself questions. I kept thinking that humanity hasn’t learnt anything from WWII. At one point one of the prisoners tells the prison guards that something like this can also happen in the US. It is an eerie but right speech.

This book tries the answers the question of how a normal guy became a high ranking member of the SS. Is there a specific moment where everything changes or was it just pure luck and what happens when you get in to deep?. The book switches from the Nuremberg trials to Ernst’s his childhood to his climb up the ladder. Does he regret his choices?

It is a fascinated story.

I truly enjoy this story, and Ernst's version of everything that happened in his life leading him to where he was in The Girl From Berlin Series. And I have to say, the way it is read is truly amazing. The German accent is used in the best spots, and having the regular dialogue read with a general, American accent makes it easy to understand and follow. The narrator's voice is like butter, and hearing him, I can feel why Ernst was so persuasive! I can only hope Ellie Midwood also uses the same narrator and also puts The Austrian Part 2 on Audible. Perfection!

There were so many praising words said about The Austrian and other Ellie Midwood’s books that I, as a writer and an avid reader to the subject of WWII, cannot help but add my voice to the chorus of her excited readers. I immencely enjyed the audio version of the book.

Historical fiction at its finest!

A very well-written and well-researched historical novel brought to life by a great narrator. It’s almost inconceivable at times how easy it is for an ordinary person to fall under hateful rhetoric and propaganda. Particularly relevant today. Kaltenbrunner, the last Chief of the RSHA, has always been a personal enigma for me and I’m glad I picked up this audiobook as it showed a very different, personal side of him. Nuremberg trials were fabulously presented as well! Enjoyed it very much. Thank you.

“The Austrian” is a fascinating fictional biography of Ernst Kaltenbrunner, the Chief of the RSHA and the highest ranking SS officer tried at Nuremberg. First thing I must say, it’s freakishly accurate, to the point where I recognized not only people (such as Höttl, Skorzeny, Heydrich, Himmler, and Dietrich) but certain quotes and events that indeed happened (Austrian Chancellor Dollfuss’ assassination is just one of such examples).
Second, I found the use of split-chronology, in which the action goes back and forth between Kaltenbrunner’s early life and his incarceration in Nuremberg, absolutely brilliant. In one chapter we encounter a young man (an absolutely ordinary young man, I must say) with hopes of traveling the world and marrying the girl he loves; in the following one we find him already as a war criminal who has millions of innocent victims’ lives on his conscience. The book is so powerful because it shows exactly how this happened, how a kind and gentle teenager grew into a murderer, with a power of sending hundreds to death with a single signature on yet another protective custody order.
The historical background of Austria after the Great War, the brewing moods of anti-Semitism and growing discontent of the population, nationalistic fraternities and conspiracies come alive in this novel, and I couldn’t help but applaud the author’s meticulous research. The narrator did a fabulous job and I couldn’t wait to get back to my AirPods to listen to his spellbinding voice. I recommend this audiobook highly to everyone who’s interested in WW2 history.