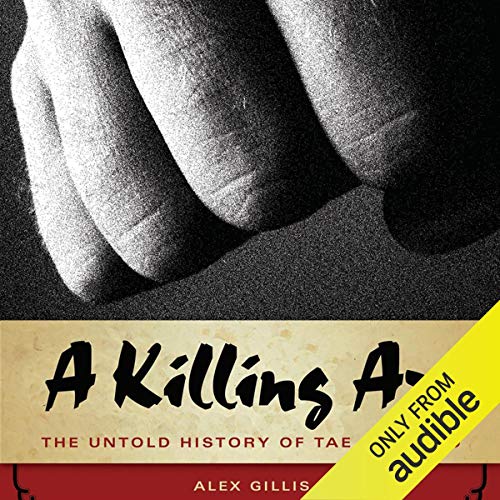 By: Alex Gillis
Narrated by: Ramon De Ocampo
Try for $0.00

Obscure documents, Korean-language books, and in-depth interviews with tae kwon do pioneers tell the tale of the origin of the most popular martial art. In 1938, tae kwon do began at the end of a poker game in a tiny village in a remote corner of what is now North Korea by Choi Hong-Hi, who began the martial art, and his nemesis, Kim Un-Yong, who developed the Olympic style and became one of the most powerful, controversial men in sports. The story follows Choi from the 1938 poker game where he fought for his life, through high-class geisha houses where the art was named, and into the Vietnam War where the martial art evolved into a killing art. The techniques cut across all realms – from the late 1960s when tae kwon do trained Korean CIA agents kidnapped people in the United States and Europe to the 1970s when Bruce Lee, Chuck Norris, and other Hollywood stars mastered the art’s new kicks. Tae kwon do is also a martial art for the 21st century, one of merciless techniques, indomitable men, and justice pumped on steroids.
©2011 Alex Gillis (P)2012 Audible, Inc.
Combat Sports & Self-Defense Sports History
Show more Show less

What listeners say about A Killing Art

I bought this book because I recently started training in Taekwondo. I love the art. It's a great workout, it helps me feel more confident, and I think it's a great mental practice. This book shows the ugly truth about the history of TKD, created by a dishonorable man who lacks the tenets of taekwondo: courtesy, integrity, perseverance, indomitable spirit. Well, perhaps he persevered, but he did it in some really discourteous and horrible ways. Suffice it to say, I have little respect for the man. I guess this is a good book to read if you are starting out in the art, but know it for what it is--a history of a sinful man creating something far greater than himself.

The reader is really stiff, too.

The historical value of this book to all practitioners of ANY branch of Taekwondo cannot be under-stated!

Great story! Narrates well! when is the movie coming out? i am just getting into TWK. A good intro to the history of the sport.

The author is clearly in love with his art and, while not shying away from the ugly truths and foundation of lies in its history, he goes to some length to justify Why it's still worth living.
Overall a well written recent historical work.
Well done.

I liked this book. was a very interesting story. I think it is a important reminder that all people are flawed regardless of what they have accomplished.

You have to know the past to understand the present.

New to TaeKwon Do, this is a great book to learn and understand the history behind this wonderful martial art.

Great book that takes you to the life and dreams of tkd grand masters. As a 14 year practitioner of ITF, there was a LOT of pieces of the history of the art that was missing. 10/10 would recommend to anyone interested in the martial art.

This book deserves a movie

There's all kinds of myth about the founding of Tae Kwon Do and the effect that ITF and WTF have now. If you want the underbelly, with lots of documentation, this is your book. You'll be going to resources again and again to supply some historical background for the events described, and you will read it again and again.

It met more than what I expected and I had high hopes for it anyway. I learned so much about the art I trained, I feel more part of the art, understanding the roots and shocked over many incidents described in the book. The narrator was perfect, pronounced words greatly and with ease, and was perfect for the book. Recommended even if you don't train the art as it is great read for any martial artist.