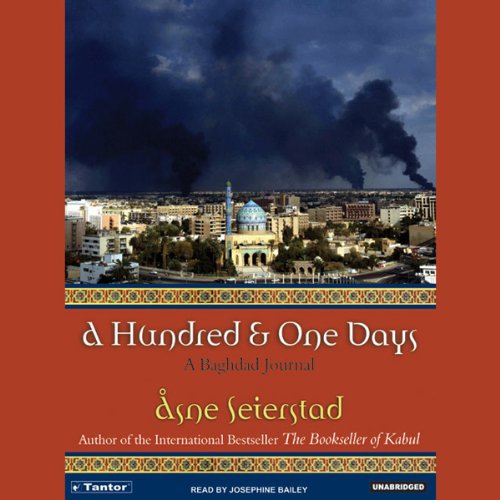 A Hundred & One Days

A Hundred & One Days

The New York Times best-selling author of The Bookseller of Kabul paints a stunning and intimate portrait of Baghdad under siege.

From January until April 2003, for 101 days, Asne Seierstad worked as a reporter in Bagdad for Scandinavian, German, and Dutch media. Through her articles and live television coverage she reported on the events in Iraq before, during, and after the attacks by the American and British forces.

But Seierstad was after a story far less obvious than the military invasion. From the moment she arrived in Baghdad, Seierstad was determined to understand the modern secrets of an ancient place and to find out how the Iraqi people really live.

In A Hundred & One Days, she introduces us to daily life under the constant threat of attack, first from the Iraqi government and later from American bombs. Moving from the deafening silence of life under Hussein to the explosions that destroyed the power supply, the water supply, and security, Seierstad sets out to discover: What happens to people when the dam bursts? What do they choose to say when they can suddenly say what they like? What do they miss most when their world changes overnight?

Displaying the novelist's eye and lyrical storytelling that have won her awards around the world, Seierstad here brings to life an unforgettable cast of characters to tell the stories we never see on the evening news. The only woman in the world to cover both the fall of Kabul in 2001 and the bombings of Baghdad in 2003, Asne Seierstad has redefined war reporting with her mesmerizing book.

"[Seierstad's] multifaceted chronicle is required reading for anyone who truly wants to delve into the complexities of life in Iraq under Saddam and during the war and its aftermath." (Booklist)

I have enjoyed all her books and especially this one. She gives a perspective on Bagdad before and after the war like no one else. The reader is superb, too, which makes it all the more enjoyable.