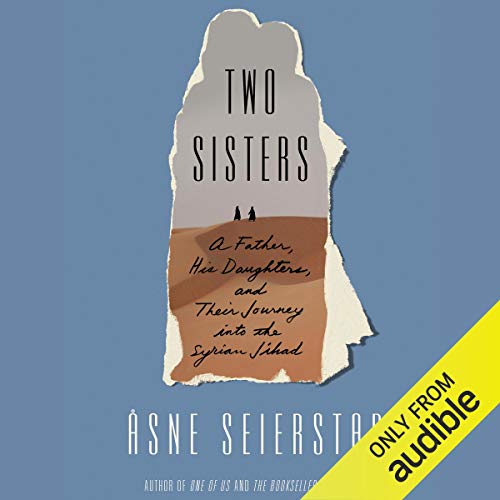 By: Åsne Seierstad
Narrated by: Suehyla El'Attar
Try for $0.00

Two Sisters, by the international best-selling author Åsne Seierstad, tells the unforgettable story of a family divided by faith. Sadiq and Sara, Somali immigrants raising a family in Norway, one day discover that their teenage daughters, Leila and Ayan, have vanished - and are en route to Syria to aid the Islamic State. Seierstad's riveting account traces the sisters' journey from secular, social democratic Norway to the front lines of the war in Syria and follows Sadiq's harrowing attempt to find them.

Employing the same mastery of narrative suspense she brought to The Bookseller of Kabul and One of Us, Seierstad puts the problem of radicalization into painfully human terms, using instant messages and other primary sources to reconstruct a family's crisis from the inside. Eventually she takes us into the hellscape of the Syrian civil war as Sadiq risks his life in pursuit of his daughters, refusing to let them disappear into the maelstrom - even after they marry ISIS fighters. Two Sisters is a relentless thriller and a feat of reporting with profound lessons about belief, extremism, and the meaning of devotion.

What listeners say about Two Sisters

this book was fantastic. The only problem I had was with the narrator who performed many peoples voices with a ridiculous and rude stereotypical "Middle East" accent; things like making every th sound into D as in father into "fodder" - Ugh. so annoying! it was completely distracting from the words of the writer and completely unnecessary. Not one Somali character sounded Somali at all. Plus, the girls and their friends would have had Norwegian accents, not this terribly acted stupid accent. The overacting did a huge disservice to a well-researched and incredibly moving, relevant narrative about this wonderful family and these lost girls.

Journalism at its best!

Learned so much about Norwegian society, about Syria, about Somalia, about Islam and to what extent parents will go to protect their children, not all of it favorable. Much of it left me speechless. A great audio book!

Raw account of family search (esp father's) for Isis-brainwashed daughters who flew to war torn Syria.
The introspection of both daughters and father is so human, so universal, it will leave you unsettled.
Great story,and narration will keep you interested such that you might listen to it twice, I did.
Shall I say-potential game changer?
I would guarantee anyone listening to this selection will be touched and left almost speechless.
Accounts of those on the ground, minute by minute, joined w broader historical overview makes for a worthwhile investment of time.

I liked it but wish I had bought it in print because it was hard to follow all of the details and keep it all straight. An excellent depiction of the history of the Isis movement. Very good journalism. as well as a good story.

the book was very interesting as it have insight into a world seldom seen especially from the perspective of a father whose daughters have been radicalized. the book at times is a bit gory but its hard to put the book down because your trying so hard to see whats around the corner for the family and fathers high hopes.

I rate this book with 5 stars all round.

Overall it was exceptionally well researched. The story itself was riveting. I also found the narration to be excellent. One of the best books I have listened to in a while.

The story is interesting, but this book has a lot of complex backstory that is difficult to keep track of when listening. I would prefer reading a physical copy so that I could more easily reference past pages and review parts I missed.

The best audio book I have experienced

Incredible story of coming out of war to only finding yourself right back into one. I loved the narrators emphasis. It captured me in a story of our times. A must listen!