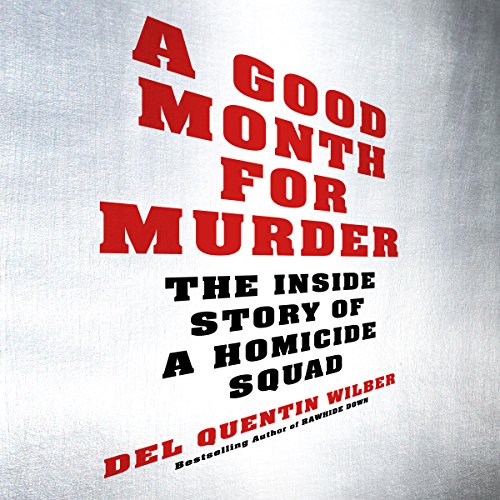 A Good Month for Murder

By: Del Quentin Wilber
Narrated by: Johnny Heller
Try for $0.00

Best-selling author Del Quentin Wilber tells the inside story of how a homicide squad - a dedicated, colorful team of detectives - does its almost impossible job.

Twelve homicides, three police-involved shootings, and the furious hunt for an especially brutal killer - February 2013 was a good month for murder in suburban Washington, DC.

After gaining unparalleled access to the homicide unit in Prince George's County, which borders the nation's capital, Del Quentin Wilber begins shadowing the talented, often quirky detectives who get the call when a body falls. After a quiet couple of months, all hell breaks loose: Suddenly every detective in the squad is scrambling to solve one shooting and stabbing after another. Meanwhile the entire unit is obsessed with a stone-cold "red ball", a high-profile case involving a 17-year-old honor student attacked by a gunman who kicked down the door to her house and shot her in her bed.

Murder is the police investigator's ultimate crucible: To solve a killing, a detective must speak for the dead. More than any recent book, A Good Month for Murder shows what it takes to succeed when the stakes couldn't possibly be higher.

What listeners say about A Good Month for Murder

Fantastic story from behind the scenes!

Narration couldn't be better. Nothing more to say about that. As a former violent crimes detective, I expected this be overly dramatic and full of fluff. I couldn't have been more wrong. I got excited when the detectives would have been excited. I got the rush that I would have had if I would have been in the interview room. I felt the exhaustion from the long days and nights of chasing leads. I felt and remember the frustration and the emotional toll that working those scenes takes on a detective. There certainty wasn't any fluff here. It was boots on the ground investigation from the first chapter. I would love to see more books from this author written about different departments. Don't miss this one if you like true crime!

I could not imagine a better voice to have in my ear to read this story.

This story stirred a lot of emotions. I'm glad I bought it.

Absolutely loved this book and I didn't want to end. The reading was excellent and made my 7 hour drive much more bearable!

The plot isn't bad, but isn't captivating either. Not what I expected. narrator did a decent job though