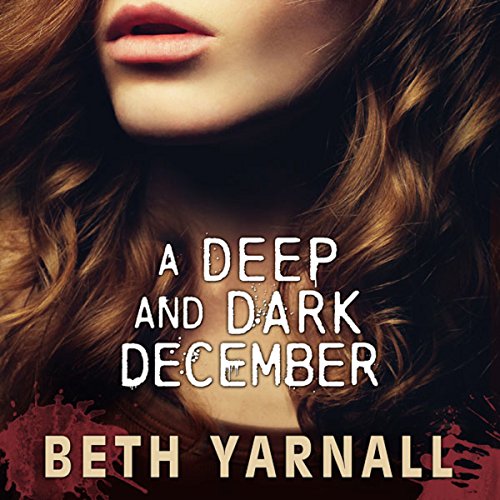 A Deep and Dark December

A Deep and Dark December

Someone is killing the residents of San Rey.

Graham is the sixth generation Doran to become sheriff of the sleepy central California coastal town. As long as a Doran has been sheriff there's been no crime in San Rey, and Graham is counting on that peace and quiet when he returns home after years as an LAPD detective. But when he's called to the scene of the murder/suicide of an old friend, he sets into motion a series of events that rocks the tiny town, and the only way to catch a killer will be to face his own dark past.

Buried secrets must be told.

Erin December has always felt like an outsider in close-knit San Rey. She comes from a family with unusual psychic abilities, which makes her an outcast in the small town. She's spent her entire life keeping her own ability a secret - until the day she loses control of the visions, and is forced to watch a brutal murder through the killer's eyes. Erin becomes the key witness to the first murder the town has seen in 60 years. But to help find the killer, she's forced to reveal her biggest secret to the last person she thought she could trust - Graham.

To stop a murderer with secrets he's killing to protect.

The December's aren't the only ones in San Rey with psychic abilities. As Graham and Erin's attraction grows so does the killer's need to protect his own secrets, turning his power on Erin and her family. Graham will do anything to protect Erin. But how do you catch a murderer who has the power to kill with his mind?

I love witchy-type of book, and I really like Aunt Cerie. It was too funny when she was reading Graham’s sexual thoughts about Erin, her niece. AND I love mystery/suspense type books. Auntie reads minds, Dad has the power of suggestion and Erin has visions. What more could you ask for?

That being said, I know that some authors try to make a book true to life; making the heroine plump, not so attractive, hair the color of a carrot, you know, the usual gross stuff that doesn’t make for a good heroine; slobber coming out her mouth while she’s sleeping, snoring like a freight train. BUT in this one it was really too much. On page 143 Erin had a bloody nose the Graham mentioned she had something hanging from her nose. Erin went to the bathroom and discovered a booger hanging from her blood-smeared nose. REALLY? All the way through the rest of the book I couldn’t help but think of that. That was simply disgusting. It would have been bad enough if she’d been alone but the fact that her love interest brought it to her attention was beyond gross. If this is the kind of thing this author comes up with I can’t see myself reading anything else by her. I hate for one nasty thing early on to stick with me through the rest of the book. It definitely takes away from my enjoyment.

Now that that’s out of the way. I did love this book. Well, except for whoever was messing with their minds, AND Graham’s father. He lived so far in the past it was ridiculous, but it became understandable later on in the story. I was surprised at the story behind Graham and Patricia, but not Graham’s thoughts on not being good enough for Erin, geez how old is that storyline. I was glad there wasn’t too much time spent with those thoughts.

This was such an exciting story I couldn’t wait to find out who the bad guy was? Who killed the three people in the book? (You’ll have to read it to find out who.) It certainly was a shock.

The last 20% were so exciting I just couldn’t believe it. The whole book was exciting but the finale was wonderful. I couldn’t turn the pages fast enough.

There was sexual tension and sex in this book and the F-bomb was dropped 20 times.

As to the narrator: He was just excellent. When someone was arguing, WOW, Steven Barnett was really angry and shouted and was full of emotion. He was awesome. And the women sounded just like women.

This book surprised Me!

Didn't think I would like the story so much but I did. Exciting plot twist with good narration. Looking forward to listening/reading more of this author's work!

A Deep and Dark December begins with Erin December who was already having a bad day at work. What turned from delivering a package to watching her client in killing himself over his dead wife's body, has turned into the worst day of her life. The only problem is that Erin is a psychic who is refused to acknowledge her abilities. She saw something in her vision that her client didn't kill himself and that her client's wife was killed by someone else.

The sheriff, Graham Doran has returned to his small, little home town San Rey. He has returned to take up the mantle from his father as sheriff. His family has been the San Rey's sheriff for the past five generation and there has been no crime occurring since the Doran has been sheriff. Graham would be the sixth generation Dorn as Sheriff of San Rey except he doesn't want it. He planned to go back to LAPD once his brother returned from his tour of duty and become sheriff.

Erin knew Graham and how he treated her back in school. She and her family have been the outcasts in San Rey even when her family was the first to settle in San Rey. Her family has been psychics throughout their generation and the town people are wary of them.

As Erin helped Graham to look into the murder, suspects are being killed. The December family are not the only psychics. Someone in town is a psychic and is willing to kill to keep this secret.

What I love about this book is the humor in it. Graham hated being the in the small town. He left San Rey and went to Los Angeles and became a LAPD Detective. He has some guilt over an incident. After being hammered by his father of being the sixth generation Sheriff of San Rey, it was more of an obligation/burden to him. He kept referring about small town and that there is no secret that can be hidden. There is a scene where he kept repeating locks and getting locks. I had to laugh at this scene. There are several other scenes that have me laughing between Graham and Erin.

Readers/Listeners will love this story. I am looking forward to reading another book by Beth Yarnall.

I love the voice that the narrator Steven Barnett has given Graham. The voice for Graham fits him perfect. Graham does have his demons to deal with from an incident that happened when he was with LAPD, his dominating father who expects him to fill his role as sheriff, and dealing with his relationship with Erin that he refused to end under his father's mandate. It shows so much characteristics of who Graham is.

The narrator give Erin a voice of being serious and uncomfortable with herself of who she is. Erin is direct with Graham and doesn't let Graham get away with things. Even though she hated being a psychic, but with Graham, she has learned that her psychic abilities is a part of who she is.

I was given this book by the author in exchange for an honest review. I was not compensated or influence in any way for writing this review.

I really enjoyed this story. I kept wanting a bit more humor in the story to match the smalltown quirkiness. The characters had that potential to be hilarious but the author never quite went there but she came close. The mystery kept me listening and I really didn't see the bad guy coming AT ALL. Kudos!! Usually I can pick out who it is and get a general idea of why by the halfway point, but in this case I didn't know who it was until the killer revealed himself. And yeah I had a total WTF moment with that one....lol.

I liked most things about this book and some of my dislikes were personal preference. Over all I'd definitely listen to this author's work again.