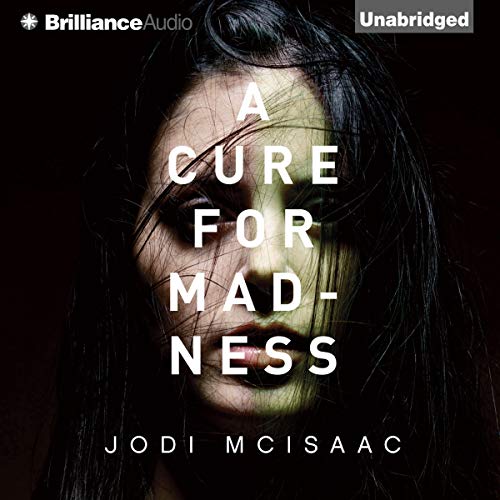 A Cure for Madness

By: Jodi McIsaac
Narrated by: Emily Sutton-Smith
Try for $0.00

Clare Campbell has worked hard to create distance between herself and her troubled family. But when she receives news of her parents' murder, she's forced to return to the quiet town of Clarkeston, Maine, to arrange their funeral and take legal guardianship of her unpredictable and mentally ill brother, Wes.

While Clare struggles to come to grips with the death of her parents, a terrifying pathogen outbreak overtakes the town. She is all too familiar with the resulting symptoms, which resemble those of her brother's schizophrenia: hallucinations, paranoia, and bizarre, even violent, behavior. Before long, the government steps in - and one agent takes a special interest in Wes. Clare must make a horrifying decision: save her brother or save the world.

What listeners say about A Cure for Madness

3.5 Stars Because Of The Ending

This book had me engaged until the end. However, the end was vague and questionable. There's no indication that this is the first book in a series so I'm frustrated. It captured me on plot, the main characters, and the medical thriller plot. I kept listening more and more wanting to know what happens. So why 3.5 stars? The ending, in my opinion, was a huge let-down and it was almost as if the author just stopped. There is a twist at the end with the main character. And suddenly, as if magic, the medical emergency that quarantined a whole city, is gone. Fixed. Everyone is fine. I just felt cheated about that. Deflated.

So in summary, this is a fun book but don't expect to know what actually happens at the end.
Emily Sutton-Smith was amazing with the delivery of the story

This book is filled with coincidences - too many coincidences. As things play out I found myself continually thinking "Well, isn't that convenient". Every single character we are introduced to plays a significant part in moving the plot forward. I will give examples below, but be forewarned - it provides (marked) spoilers.

I wish the characters were a bit more fleshed out for us. I prefer stories that develop characters just as much as the plot. This story, however, only uses the characters to move the plot along. I will say that I really liked the ending. It is less than two pages long and yet it gets the job done brilliantly.


Need someone to plant the idea that this outbreak might be government created - crazy brother's fellow sanitarium inmate spouted off some insane prattle about that.

Need someone with inside information about the government's involvement in this outbreak - Clare's roommate works for the NSA.

Need a doctor that is an ally and can skip us through the red tape in the hospital, sneak us in and out, preform tests and get results super fast - Clare's very brief ex-boyfriend from many years ago (but they are in love).

Need conclusive proof that Clare was exposed to the pathogen - the man who coughed on her in the airport is the husband of her grade school teacher and her old friends happen to know that they both became infected.

Need survival tools - Clare's dad has a hoard of guns stashed under some blankets - you know, to keep them hidden from his son who is mentally ill and known to be violent.

Need a place to hide out from the government hounds that are chasing you - your parents still own some of the property (sold the house on it, but kept just enough property on the outskirts). Oh and Dad built a treehouse that, even with the boards nailed into the trunk to serve as a ladder, is still unseen by normal people.

Need to get to get out of the country - brother knows anarchist guys that live in, on, and over, the border of Canada, with comrades on both the US and the Canadian side.

Need to sneak into that other country - there are abandoned drug tunnels right on the property.

I really enjoyed this one. It's a story with a lot of heart and feels all too real at times. Wonderful job by all involved. Thank you.

I enjoyed this up to the last 5 minutes. What a cop out ending. Was expecting more.

So this book is pretty good until the ending, I have to check to see if this is a series because the ending left a lot of questions. I find that to be a bit annoying because it leaves you wondering a lot about the characters. It seems like the author got tired of writing and said screw it im just going to end it. 😩

Impressive all the way to the very last sentence!

Truly enjoyed the detailed perspective of each character and their struggles. Great character dynamics throughout.

It ended before it was finished.

Not the best book I've read this year, but the story was engaging and the characters compelling enough to hold my interest until the final page. UNFORTUNATELY, the final page is missing one of those story components that most of us take for granted: an ending.

I don't mind a clever story that is so rich and complex that it takes time to ponder and decipher the ending, but there's nothing clever or complex about the way this one abruptly ends without doing us the courtesy of answering a rather significant question.

The book was great, had me intrigued the entire time, until the very end. It leaves you hanging, I had more questions when the last word was read. I even double checked to make sure I got the entire download. Unless there is going to be a sequel I am not sure I'd recommend this book to anyone, unless you like cliffhangers.

Really enjoyed this book, it isn't what I would normally read but I would highly recommend as it kept me interested throughout. 😝😝😝😝

Lovely reading or listening. A little bit of romance, little bit of action. Ending was for me slightly unsure. What really happened?