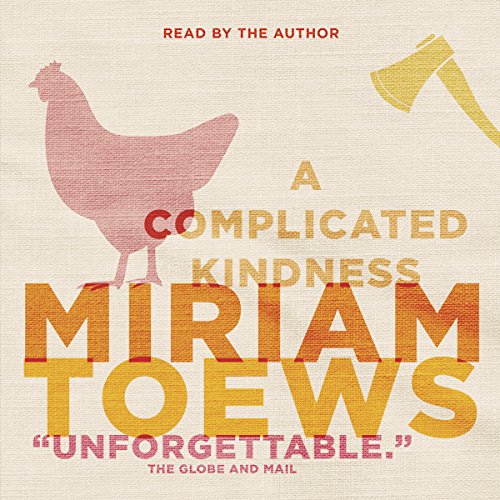 Sixteen-year-old Nomi Nickel longs to hang out with Lou Reed and Marianne Faithfull in New York City's East Village. Instead she's trapped in East Village, Manitoba, a small town whose population is Mennonite: "the most embarrassing sub-sect of people to belong to if you're a teenager". East Village is a town with no train and no bar whose job prospects consist of slaughtering chickens at the Happy Family Farms abattoir or churning butter for tourists at the pioneer village. Ministered with an iron fist by Nomi's uncle Hans, aka The Mouth of Darkness, East Village is a town that's tall on rules and short on fun: no dancing, drinking, rock 'n' roll, recreational sex, swimming, make-up, jewellery, playing pool, going to cities, or staying up past nine o'clock.

As the novel begins, Nomi struggles to cope with the back-to-back departures three years earlier of Tash, her beautiful and mouthy sister, and Trudie, her warm and spirited mother. She lives with her father, Ray, a sweet yet hapless schoolteacher whose love is unconditional but whose parenting skills amount to benign neglect. Father and daughter deal with their losses in very different ways. Ray, a committed elder of the church, seeks to create an artificial sense of order by reorganizing the city dump late at night. Nomi, on the other hand, favours chaos as she tries to blunt her pain through "drugs and imagination." Together they live in a limbo of unanswered questions.

Nomi's first-person narrative shifts effortlessly between the present and the past. Within the present, Nomi goes through the motions of finishing high school while flagrantly rebelling against Mennonite tradition. She hangs out on Suicide Hill, hooks up with a boy named Travis, goes on the Pill, wanders around town, skips class, and cranks Led Zeppelin. But the past is never far from her mind as she remembers happy times with her mother and sister - as well as the painful events that led them to flee town. Throughout, in a voice both defiant and vulnerable, she offers hilarious and heartbreaking reflections on life, death, family, faith and love.

Eventually Nomi's grief - and a growing sense of hypocrisy - cause her to spiral ever downward to a climax that seems at once startling and inevitable. But even when one more loss is heaped on her piles of losses, Nomi maintains hope and finds the imagination and willingness to envision what lies beyond.

Few novels in recent years have generated as much excitement as A Complicated Kindness. Winner of the Governor General's Award and a Giller Prize Finalist, Miriam Toews' third novel has earned both critical acclaim and a long and steady position on our national best-seller lists.

"Poignant.... Bold, tender and intelligent, this is a clear-eyed exploration of belief and belonging, and the irresistible urge to escape both." ( Publishers Weekly)
"...knockout novel....There's leave-taking in this book. But there's wholeness, too. It is a joy." (Jennifer Wells, Toronto Star)
"In novel full of original characters...Toews has created a feisty but appealing young heroine.... As an indictment against religious fundamentalism, A Complicated Kindness is timely. As a commentary on character it is fresh and inventive, and as storytelling it is first rate." ( The London Free Press)

What listeners say about A Complicated Kindness

A COMPLICATED KINDNESS written and performed by Canadian authour, Miriam Toews, makes me proud to be a Canadian.

A COMPLICATED KINDNESS was indeed a perfect name for this novel. Showing the life of a 16-year-old girl growing up as an orthodox Mennonite in a very secluded area, can only be complicated. This novel felt like a stream of esoteric ramblings, and, for the purpose of this novel, this was the only way it could have been written. I enjoyed how the novel was strictly from the point of view of the 16-year-old protagonist and, for the most part, it stayed in the present moment. When the book did jump around, I did not get lost, as I always knew that I was listening to a ‘moment to moment’ experience of a 16-year-old girl.

Miriam Toews performed the reading exceptionally well. If she had gotten someone else to read her novel it would not have come off so well.

I don't want to go into too much detail about this novel as it will give too much away. What's I will say is that A COMPLICATED KINDNESS took me on a roller coaster of Unexpected emotions, left me with many unanswered questions, and broke my heart. However, in the end, the unanswered questions, the Unexpected roller coaster of emotions, and the breaking heart made this novel very satisfying.

Life, yours and mine, is not neatly packaged up in yellow tissue paper and pink bows. Life is raw. Life is hard. Life is unexpected. And this is what makes life beautiful.

I feel that the author Miriam Toews did a fantastic job at showing the real blows of life from the perspective of a 16-year-old girl living in a very complicated world.