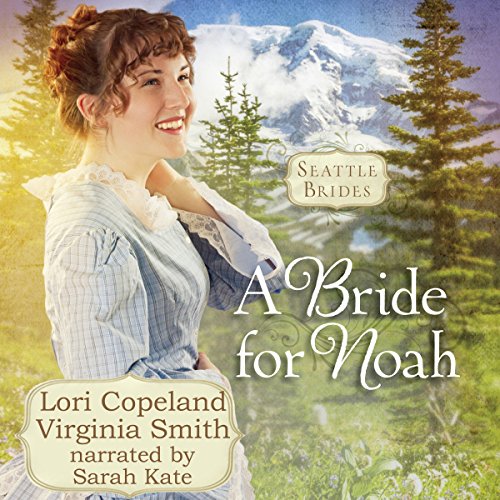 A Bride for Noah

By: Lori Copeland,Virginia Smith
Narrated by: Sarah Kate
Try for $0.00

Lori Copeland and Virginia Smith, beloved authors of the Amish of Apple Grove series, team up again in an exciting new series for devoted fans and new listeners.

It's 1851, and Evie Lawrence is penniless and heartbroken after a failed romance. When a kind elderly man announces his plan to move west and make his fortune, Evie jumps at the chance to go with him and start a new life. She says goodbye to the only home she's ever known and sets out for the Northwest.

There she meets Noah Hughes, a handsome young man who has gambled everything he owns on the chance to make a fresh start. Living the rugged life of a lumberjack, he too is determined to one day make his fortune. The last thing he's looking for is a bride...so why can't he get Evie out of his mind?

In this first book of the Seattle Brides series, two people learn what it means to move beyond their expectations and embrace the very best God has for them.

What listeners say about A Bride for Noah

didn't held well with me

the story started out promising until the heroine start getting bossy ,pushy and down right annoying the story weren't funny it was just unbelievable a woman coming in a work camp behaving like that they would send her back to where she comes but no .everybody love and suck up to her even the indians give me break I would not recommend this book to no one