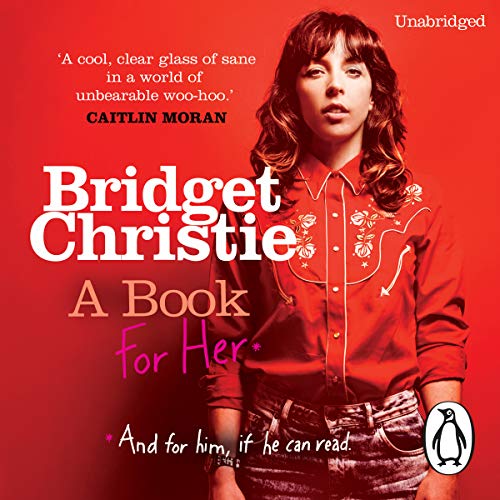 A Book for Her

Up until that day, she hadn't realised that misogyny was like shiny leggings: it had been making an unexpected comeback (and for the record, neither do ordinary women any favours).

From that moment, Bridget decided that the world should know that feminism is not embarrassing for women. In fact, she managed to find the humour in it. And she wasn't afraid to answer the difficult questions all women wanted to know: why do fish stare at you during lap dances at Stringfellows? Do I need to have botox before heading to a pub quiz? Is bootylicious a new brand of feminism or an arse-flavoured bubble gum?

A Book for Her is Bridget's story. But it's not only a book for her, it's also a book for you. And for him, if he's not a dick. Or even if he is, he could learn something that might make him not a dick.

Oh and what happened in that bookshop? You'll have to listen on to find out....

What listeners say about A Book for Her

Smart, funny, and painfully true. I'm so sorry it's over. I hope there's another book from Bridget Christie in the not-so-distant future.

This was the funniest book I've read or heard in years. I wasn't too keen on the farting bits but this book was well worth it! I plan on buying the hardcopy too! I have to imagine that her narration made it far more hilarious.

What made the experience of listening to A Book for Her the most enjoyable?

Bridget Christie is a breath of fresh air to me. She is bitingly intelligent and funny, and I felt finally that I've found a female comedian that I can relate to. Infinitely more interesting and witty than Amy Schumer and the like. I can't wait for more of Bridget's work to become available.

Two weeks ago my best friend's husband...whom I adore...got out his phone and showed a video of a topless woman dancing to Robin Thicke's Blurred Lines. We were a group of girls at a party. He was then angry when I said, quite calmly, that I didn't want to see it.

He said I was jealous of the woman's body.

This made me angrier than I have been in a very, very long time. I hope I don't have to explain why here.

I will be buying a hardback copy of Bridget Christie's masterwork in finding the funny in the blanket suppression of we, the majority, by willy owners and sometimes, even ourselves. I think it is the spoonful of sugar needed to help that
medicine go down.

My best friend had a little girl a few months ago...I'm buying the book for her sake.

Thanks Bridget, you are a legend.

Not just for the ladies

Bridget Christie brings her book to the Audible community with great enthusiasm and humour (there's loads of extra jokes where she directly addresses the listener). This is a 2015 compendium of all the shows she's done over the last 5 years and explores the themes around them. Whilst there's a load of silliness, there's also some important underlying messages of equality and respect. I'm a guy and never found the feminist issues anything other than engaging and thought provoking. Don't miss this fantastic book.

Bridget Christie is awesome and I liked having her in my ears for a few hours.

I just loved this book-Bridget Christie is so smart and funny without an ounce of pomp or worthiness. It's a book I want to give to my daughter when she's older because every girl should have someone as warm and funny yo help her understand feminism and why it's not only still relevant but vital.

It's not just for her

Where does A Book for Her rank among all the audiobooks you’ve listened to so far?

This audiobook really got me laughing; and thinking.

Christie is a terrific comedian so it's no surprise that the performance is great. She occasionally drops whatever the audiobook equivalent of the fourth wall is, chastising the listener for choosing the easy option of listening to rather than reading her book.

She really does manage to make feminism very funny without trivialising it and without preaching.

This isn't just a book for people with women's ears, I have men's ears and I really enjoyed it.

A Book for Her

Bridget Christie is an incredible comedian and she focus here on many important feminist issues. She is very inspiring and has made me feel more confident about standing up to sexism through comedy and hard facts about gender inequality. I would definitely recommend. Thanks Bridget.

Thanks for doing an audio book...

...the assumption made early on that everyone who listens to audiobooks is somehow lazy and doesn't understand how to use a real book is incorrect. As a blind person I desperately tried to find the Braille version of the book. Despite spending several hours in a number of bookshops fondling the shelves in the feminist section I could not find it, although I did accidentally molest a couple of feminists and get forcibly removed and barred from one of the shops. For some reason being blind was not an acceptable defence and was overlooked due to my being male.

Anyways, having listened to the book in all its animated glory I can only conclude that the Braille version would have seemed a little dry in comparison.

As a sanctimonious hypocrite I find that comedy with a purpose or message is the best comedy of all and thoroughly enjoyed this book. The bits about FGM horrified me but also lead me on a trail where I discovered MGM. Contrary to FGM which has been high profile in the media and politically I found that MGM was not on anyone's agenda. I found this odd, why not just make an issue of genital mutilation performed on anyone regardless of sex? Why ignore it in one sex in preference of another? Why the division? It almost suggests that MGM is not even an issue or that the cultural mutilation of males does not matter.

As a result I have started a campaign group to try and stop mgm. Our first protest outside of a Brit milah in Kensington didn't go so well. We were arrested and prosecuted for anti semitism. It seems lack of consent from an 8 day old baby does not matter if the WHO say that sub Saharan men are less likely to contract HIV if they have been circumcised. I wonder if they have stats on HIV for men who have been castrated in their youth? The feminists I have met also mostly think Leviticus 12:3 is not a particularly offensive part of the Bible in contrast with the vast bulk of the rest of it.

Our second protest targeted the Warrumanga tribe from Australia but we were accused of racism and supporting anti indigenous hate groups.

Next we are moving on to a campaign about the Xhosa: teenage boys undergo genital mutilation often become seriously unwell due to infection and sometimes die for a number of reasons associated with the procedure and the rite of passage that follows. We have been told by authoritative sources that we will be ignored by people from that culture because we are not real men - having not been circumcised. (Not that we'd intended to get our dangly bits out at the protest.)

I digress, this book is funny, smart, generously ambiguous and devoid of real responsibility. I wish you'd been my mummy BC, I'd have grown up with a different and much more interesting range of mental problems than I have now.

LOVED THIS BOOK - essential for all humans!

Bridget Christie is incredibly astute and also incredibly funny. I couldn't have loved this book, her as an author or her amazing narration more. Am hitting the "play again" button, I've got a feeling I'll listen to this over and over!! Don't hesitate, download this now.

That's my first review ever but just can't help myself. I bought this audiobook after watching Bridget's comedy special on Netflix. She's wise and hilarious. You won't regret any minute spent in her company. I don't agree with everything, I laughed at almost everything (which immediately turnes you into a maniac if you're listening to it on a train or while walking on the street) and I love her to bits.

needed to concentrate on the gags. very funny. i enjoyed it and will read again.

Became tedious to listen to

only managed to get through the first couple of hours, even with the comedy vein running throughout.