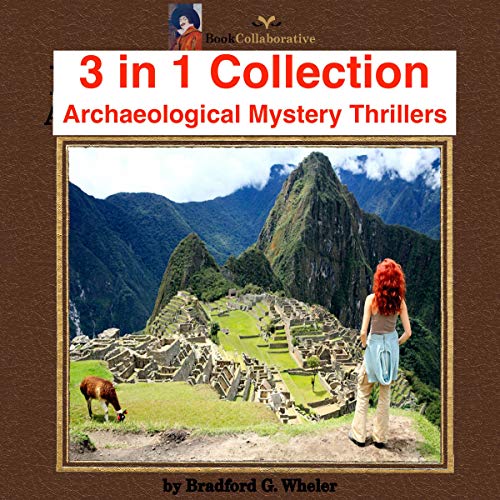 This audiobook is a three-in-one collection of Cornell Archaeology Professor Rob Johnson in the archaeological mystery thrillers Inca's Death Cave, Mongolia and the Golden Eagle, and The Zulu Curse.

A 500-year-old puzzle catapults an archaeology professor and his brilliant grad student into the adventure of a lifetime in Inca's Death Cave, a new mystery thriller from author Bradford G. Wheler.

What happened to a band of Inca rebels who journeyed north in Peru to seek the fabled cave of the true gods - and escape the disease and destruction brought by Spanish conquistadors? They were never heard from again.

Did they just melt back into their villages, or was something more sinister involved? What trace or treasure did they leave behind?

The ingenious plot of this thriller is full of twists and turns, excitement and adventure, archaeology and technology. Listeners will meet fascinating characters they'll never forget: a high-tech billionaire, a quick-witted professor, his beautiful young student, and her still-tough grandfather, a retired Marine gunny sergeant.

Cornell University professor Robert Johnson and his star PhD student are hired by a billionaire entrepreneur to solve a 500-year-old archaeology mystery in northern Peru. But first, they will have to survive corporate skullduggery and drug lord thuggery.

And why, 6,700 miles away in Vatican City, is the old guard so upset? What dark secrets could centuries-old manuscripts hold?

This assiduously researched, fast-paced novel brings the Incas and their ancestors to life against the backdrop of the Peruvian Andes.

Mongolia and the Golden Eagle (an archaeological mystery thriller)

Why is Cornell archaeology professor Robert Johnson, a pre-Columbian scholar, selected to head up a multimillion-dollar project in Mongolia? Why is this so important to high-tech billionaire Walter Falone? Why is he using consultants from Israel aerospace industries for his government contract in Mongolia?

Cybersecurity threats, high-tech spying, and Chinese agents mix in this ingenious and thrilling plot of full of twists and turns. Somewhere in spectacular snowcapped Altai Mountains of Eastern Mongolia, there is a mysterious object that people are willing to kill for.

This assiduously researched, fast-paced novel brings archaeology and cyberespionage to life against the backdrop of the wild and rugged landscape of Mongolia, the land of Genghis Khan.

Why is tech billionaire Walter Falone involving Cornell archaeology professor Rob Johnson in something that appears to involve so little archaeology? The latest adventures of Professor Johnson and his protégée Abbey Summers take them to Peru, Rotterdam, Africa, London, and Australia in a new mystery thriller from author Bradford G. Wheler.

While Professor Johnson, Abbey, and their crew try to unravel a set of clues that don't seem to make any sense, they must dodge bullets, too. Someone is desperately trying to stop them - by any means necessary.

Is it gangsters, eco-terrorists, corporate warfare, or something much more sinister? Is their own government trying to kill them?

This assiduously researched, fast-paced novel brings archaeology, bioengineering, and cyberespionage to life against an international backdrop of five continents.

What listeners say about 3 in 1 Collection: Cornell Archaeological Mystery Collection

These have a good story line, but they have a sudden ending, that leaves you wanting more. The endings seem rushed it felt like the last season of Game of Thrones.

If sloths could write ...

Tedious is the kindest adjective to describe the first story. I tried to hold out for a plot but after 28 chapters filled with ... I had cream in my coffee...the Japanese student brings honor to her family... we visited some more... the doctor said have a nice day ...! There doesn’t seem to be a core to this story.
I give up!

This is truly a must-have.

This is truly a must-have. The characters are fantastic and the fast-moving adventure makes it hard to put down. Truly a great audiobook.

I always like to read suspenseful and mystery stories and this one is the best I've read so far. The plot is captivating, the characters are amazing and the ending is superb. It is a complete entertaining story.

One of the more enjoyable book

One of the more enjoyable books I have listen . The plot had twists and the writing was excellent. The author does a masterful job of showing rather than telling, and that makes the story stay alive. A really good book

I have enjoyed these books very much,

Interesting, twisting mystery. Stand-alone that is easy to follow. Realistic storyline. I recommend this book.

Very interesting and entertaining. You can imagine yourself there with the descriptions presented. Very well written. I’ll get more of this author's books.

I have enjoyed these books very much,

I have enjoyed these books very much, they were not what I expected but kept me engaged. Toward the end, I was able to solve the ending which didn't alter my enjoyment.

This book just as interesting as the first story. I liked the historical value as well as the fictional side. Can't wait to get more.

This was a very interesting and informative book. I liked the plot and how it unfolded.

Could be a lot better

Nice story lines but poor characters, very flat. Too many "i said" , "he said", "I said". Got to be very annoying. And the background information was far too much and sounded like it was being read from a manual or wikipedia - far too formal for a character to speak and certainly got in the way of the story.

Enjoyed the book . Fast paced and interesting. Only draw back was numerous errors that should have been picked up. Overall a good read.