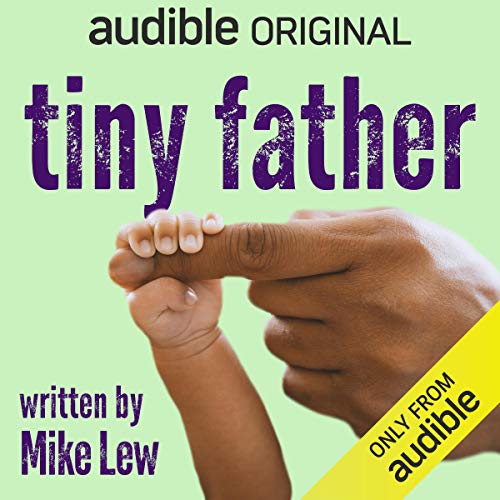 By: Mike Lew
Narrated by: Ali Ahn,William Jackson
Try for $0.00

Daniel is a freelancer without health insurance or a committed relationship when he suddenly finds himself as the sole caregiver for his dangerously premature daughter. As he grapples with whether he will run from responsibility or grow into fatherhood, he befriends an outspoken neonatal intensive care unit nurse struggling to balance the demands of her job and her own family. Penned by playwright Mike Lew and directed by Moritz Von Stuelpnagel, tiny father explores the humorous truth about parenting and the fear that comes from an emotionally exhausting health scare.

Playwright Mike Lew was awarded a commission through the Audible Emerging Playwrights Fund, an initiative dedicated to developing innovative original plays driven by language and voice. As an Audible commissioned playwright, he received funding and creative support to develop tiny father.

What inspired me to write this story?
"When I first became a father someone said, 'Think of the new plays you'll write!' The remark kind of haunted me. First off, I was too sleep-deprived to think about anything. Secondly, even if fatherhood changed my whole life overnight, my plays stayed the same. I process my whole worldview through my plays, but this is a glacial process. The plays I wrote then were still capturing my pre-fatherhood world; it'd be years before I could even imagine portraying fatherhood in my work. But the shift happened rather abruptly: our second child was born an extreme preemie and spent four months in the hospital in the neonatal intensive care unit. Suddenly all that I'd learned as a new father snapped into focus. I knew I had to write about NICU life, but I also wanted to capture the fears of becoming a parent for the very first time, as portrayed through the relationship between a new-father-in-extremis and a NICU nurse. This Audible commission was also created in extremis: it was written and performed amidst COVID. Fortunately I had three of my closest collaborators along for the ride: director Moritz von Stuelpnagel and actors Ali Ahn and Will Harper (for whom I tailored the roles)." –Mike Lew, playwright of Tiny Father

Mike Lew is a Brooklyn-based playwright, Tony voter and Dramatists Guild Council member whose honors include the Guggenheim Fellowship, PEN Emerging Playwright, Lanford Wilson, Helen Merrill, Heideman, and Kendeda awards as well as a Lark Venturous fellowship. With his wife and fellow playwright Rehana Lew Mirza, Lew holds a shared Mellon Foundation Residency at Ma-Yi Theater and Artist-in-Residence at La Jolla Playhouse. His plays include Teenage Dick, Tiger Style!, Bike America, and microcrisis, and the book to the musical Bhangin’ It (with Rehana Mirza and Sam Willmott). Lew is an alumnus of Juilliard and graduated manga cum laude from Yale.
Ali Ahn
William Jackson Harper

Born and raised in Los Angeles, Ahn splits her time between New York and Los Angeles, working in theater, television, and film. Most recently she appeared as Sarina on the Fox series neXt, and as Lynn in the feature film Lucky Grandma. Ahn also played Josie Cho on the VH1 series The Breaks, in addition to recurring roles on The Path, Raising Dion, The Other Two, Orange Is the New Black, Supernatural, Billions, Odd Mom Out, and Black Box. Other film and television credits include The Girl in the Book, Liberal Arts, Equity, Louie, Nurse Jackie, Benders, Blue Bloods, White Collar, Law & Order: SVU, Zero Hour, Ugly Betty, and Social Distance. Some of her stage credits are The Heidi Chronicles on Broadway, The Great Leap (Atlantic Theater Company), Romeo and Juliet (Shakespeare on the Sound with songs by Tony Award winners Stew and Heidi Rodewald), Strike-Slip (Humana Festival @ Actors Theatre of Louisville), Sugar House at the Edge of the Wilderness (Ma-Yi), Twelfth Night (The Pearl), Importance of Being Earnest (The Pearl), and House of Bernarda Alba (National Asian American Theatre Company). Ahn is also the voice of dozens of audiobooks. She received her training from Yale and Calarts.
Photo Credit: Susan Schacter

William Jackson Harper starred as Chidi in NBC’s hit comedy series The Good Place. The Peabody Award-winning show received the AFI Award for TV Program of the Year in 2018, as well as Emmy, Golden Globe, and Critics’ Choice award nominations for Best Comedy Series. For two consecutive years, Harper received a Critics’ Choice Award nomination for Best Supporting Actor in a Comedy Series for his performance. He stars in Barry Jenkins’ Amazon limited series The Underground Railroad, set to premiere in May 2021. He appeared in Focus Features’ 2019 legal drama Dark Waters, on the scandal revolving around the DuPont chemical company. In 2019, Harper also starred in A24’s thriller Midsommar, and earlier that year he starred in the buddy comedy turned crime thriller Lost Holiday, which premiered at the Slamdance Film Festival. His additional feature film credits include Paterson, True Story, All Good Things, and How to Tell You’re a Douchebag. On television, Harper appeared as the character Xander opposite John Krasinski in the second season of Amazon’s Jack Ryan. Additionally, he has made guest appearances on numerous acclaimed television series, including 30 Rock, The Blacklist, Law & Order, Hulu’s Deadbeat, High Maintenance, Unforgettable, and the PBS children’s series The Electric Company. His credits also include the telefilms The Breaks and The Share. Born in Dallas, Harper has an extensive background in theater, co-starring alongside Cristin Milioti in After the Blast at Lincoln Center, as well as on Broadway in the Tony Award-winning play All The Way, with Bryan Cranston. In 2018, Harper made his playwriting debut with the drama Travisville, which centers on a Texas church community untouched by the tumult of the civil rights movement. The play opened at New York’s Ensemble Studio Theatre to critical praise, with The New York Times noting Harper’s "serious writing chops." Additional stage performances include A Family for All Occasions, Modern Terrorism, The Total Bent, Titus Andronicus, and Measure for Measure, Placebo, A Cool Dip in the Barren Saharan Crick, Queens Boulevard and Paradise Park. He also has numerous regional theater credits. Harper currently resides in Brooklyn with his dog, Chico.


Let's show our appreciation for fathers—whether they're a birth parent, an adoptive parent, a father figure, or a dad-to-be. We all know how important these men are, and if you’re looking for the perfect gift for the dad in your life, an audiobook might just fit the bill. No matter your dad’s favorite genre, you’ll find the perfect listen in our guide, from informative histories to crime thrillers to touching memoirs to great celebrity comedies and beyond. Whether you’re already a proud papa or a father-to-be, our collection of the best audiobooks for dads is sure to entertain and inspire.

We’re raising the bar on audio entertainment with these original listens produced in the Audible studios.
+More
LIST

What listeners say about tiny father

My son was born at 29 weeks and spent four weeks in the NICU. He will be turning 25 this summer. There were events and emotions in this story that we lived. My son was able to pull out his ng tube faster than the nurses could get the tape to tape it down. Watching his bottle feedings, knowing they were the last thing keeping him there. The anxiety as we left that we were on our own.

But then, the glorious feeling of carrying him past the length of his monitoring wires as we made our way out of the NICU! Such a weight was lifted.

I stumbled on this accidentally. I wanted something short to listen to.
I was only 30 minutes into this listen when I wanted to stop and write a great review at that point. It had me laughing out loud in my kitchen. It was a pleasure to listen and the performers were fantastic. What great chemistry!
Please take the time to listen to just the first 15-30 minutes, I promise you will
be hook just as I was.

Stumbled upon this book and I’m glad I did. Realistic feelings for a Father I’m sure. I like the educational statistical point about black mothers dying 4xs the rate of other mothers. The nurse was very informative, compassionate but real. The Fathers nervous wittiness was laugh out loud funny. Lol I’ll define searching more short stories like this.

This audiobook production was really good.I loved the performance.The narration was awesome it felt like I was their with the nurse and the father.This story held my attention from beginning to the end.I didn’t want the story to end.

I’m pretty sure that was the same William Jackson who played “Chidi” in the Good Place. He was excellent! This book production really gives voice the challenges and behind the scenes grief gone through by parents of premature babies.

This made my heart smile.
I took lunch early just to finish this today.
Thanks for the beautiful mental escape.

This was a good, short sweet story. I love how the dad stepped up to his responsibility and fell in love with his baby.

A very enlightening story of unawareness

I thought the story was very enlightening, I had no idea what preemie parent goes through both physically and emotional trauma. Day in and day out, the uncertainty of not knowing what's around the corner, the cost, your rights as a parent within the hospital system.

Great story of a single father stepping up to the plate to care for his sick infant daughter. CM

I went through the same thing with my child and my child was also born at 26 weeks, I enjoyed his story. Being a NICU Parent is a lot but it’s sucks that he had to go through it alone.