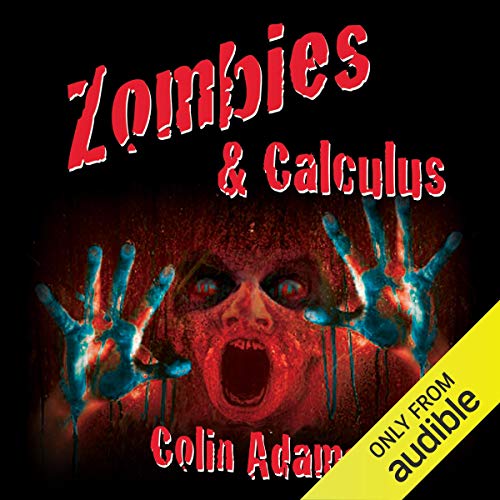 By: Colin Adams
Narrated by: Fleet Cooper
Try for $0.00

How can calculus help you survive the zombie apocalypse? Colin Adams, humor columnist for the Mathematical Intelligencer and one of today’s most outlandish and entertaining popular math writers, demonstrates how in this zombie adventure novel. Zombies and Calculus is the account of Craig Williams, a math professor at a small liberal arts college in New England, who, in the middle of a calculus class, finds himself suddenly confronted by a late-arriving student whose hunger is not for knowledge. As the zombie virus spreads and civilization crumbles, Williams uses calculus to help his small band of survivors defeat the hordes of the undead. Along the way, listeners learn how to avoid being eaten by taking advantage of the fact that zombies always point their tangent vector toward their target, and how to use exponential growth to determine the rate at which the virus is spreading.

Williams also covers topics such as logistic growth, gravitational acceleration, predator-prey models, pursuit problems, the physics of combat, and more. With the aid of his story, you too can survive the zombie onslaught. Featuring easy-to-use appendixes that explain the mathematics necessary to enjoy the book, Zombies and Calculus is suitable for recent converts to calculus as well as more advanced readers familiar with multivariable calculus.

What listeners say about Zombies and Calculus

What did you love best about Zombies and Calculus?

The story kept my attention the whole time.

Dramatic, Appropriate, and Eloquent (well, as much as calculus allows)

It was a lot more gory than I anticipated. It's like Numb3rs meets The Walking Dead.

Easy story to follow but you will get lost in some of the math if you don't have a calculus background (mainly derivatives).

Funny in so many ways!

If you're looking for a zombie book with some math and humor, this is your book.

Calculus almost made sense. Not sure why this review system requires so many words. Review of Audible review system - highly annoying

Entertaining chiefly due to the performance however listening to lines of math formulae doesn't work.