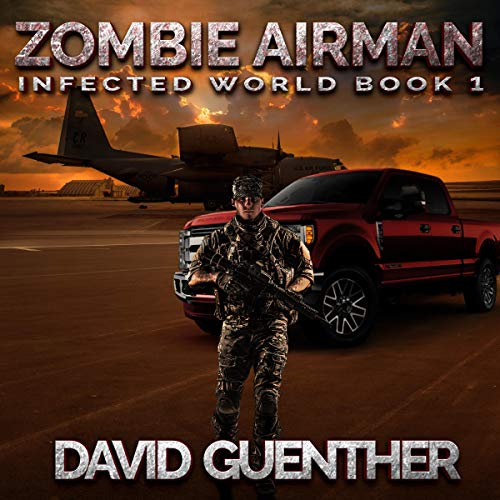 By: David Guenther
Narrated by: Randolf Rebrick
Try for $0.00

The night of the plague follows sunset on April Fool’s Day around the world. By sunrise, less than fifteen percent of the world’s population is uninfected. The airborne disease is invulnerable to any air filter or disease barrier. The fifteen percent uninfected are still vulnerable to the disease when spread via bodily fluids as the infected seek to spread their disease. These are the stories of those just trying to survive.

Airman First Class Caleb White, dorm rat, burned out on monitoring computer displays eight hours a day in a small cubicle in a large cubicle farm. His few interests off duty, bar hopping, taking care of his beloved truck, and managing to find trouble. A spur of the moment decision sets him up for a night of adventure and more excitement than he ever had in the Air Force.

Major General William ‘Willy Pete’ Peters, has a rotten night. Preparing for his third divorce, he wakes to find his one night stand trying to eat him. She ends up having a fireplace poker sticking out of her skull as he learns that’s the least of his problems. By morning, he comes to the realization he is the senior ranking survivor of all the services.

Lieutenant Gloria ‘Grits’ Alban awakens among dozens of corpses on a bridge. Her uniform is torn and saturated in blood. She has no memory of the long night. She joins her fellow survivors and finds it hard to accept their stories of zombies the night before. Equally hard to believe is the new abilities she’s slowly learning she now has.

What listeners say about Zombie Airman

Interesting twist to the zombie genre!

Here we have an interesting zombie tale with a few twists. The most interesting being some of the infected military did not turn, although their eyesight, strength, and endurance improved. These semi-infected carriers could walk among the undead without being attacked. This twist opened up new options for the author, expanding the tale without being too ridiculous. The story focuses on an overrun military base regrouping, gathering resources, and trying to set up new operations at another base. The characters are well developed and likable. The zombies are plentiful with lots of action to go around. From the sound of the epilogue there is another book coming. I look forward to hearing how Caleb and Gloria make out. This audiobook was given by the author, narrator, or publisher at no cost in exchange for an unbiased review via Audiobook Boom.

A different take on the zombie apocalypse

This story was a different take on the zombie apocalypse because of the added aliens. There is a lot of characters to keep track of. I very much enjoyed the story line of Gloria and the little boy she protected. The narrator did a great job and has a very interesting voice that added to my listening pleasure. I received this for free for an honest review.

Zombie Airman is a more lighthearted zombie apocalypse, as opposed to the more common downer zombie series, where everything is tragic and people end up being the larger issue... It is more like a favorite TV series of mine, Z Nation, than The Walking Dead...

The book is dealing with a large cast of people, primarily Air Force personnel, hence review title of "Airpersons" , men and women, from an airbase. The three main characters are Air Force personnel: General Peters, Gloria, a Lieutenant, and Caleb, an Airman.

The book has some interesting fresh ideas as well. Also like Z Nation, the concept of humans who get infected but don't turn is used. The story was complete, but open ended.

There is a bit too many acronyms in use, and although they are explained on first use, it is a bit much for someone not familiar with them to follow. In a few spaces there was I think there was as many as three in the one sentence.

The narration was easy to listen too and suited the tone of the material.

I throughly enjoyed this book. I really liked the take it has on the zombies and how some people are Infected and still almost human but not. I can't wait to read book 2 and see where David Guenther takes it.

I really enjoyed the story! The new take on the zombie infection was very welcome. I enjoyed the excitement and horror the author was able to pull off equally. The only downside was the narrator, especially when a female character was being voiced.

The best Zombie tale this year

Zombie Airman. The best Zombie book I've read/listened to in a long time. It has a fresh twist on the genre, it's gripping and fast paced. Full of action.
It is a full novel but I was so engaged by it - I wanted it to be longer.
Narration by Randolf Rebrick is excellent. I've never listened to any of Randolf's work but will look out for his narration in future.
I was given a free copy of this audiobook at my own request, and voluntarily leave this review.

The only other observation that I would make about the story is that this a very action oriented story and less of a character-driven or plot-driven story. My personal preference (your mileage may vary!) is to understand and engage with the main characters emotionally, but this story focuses more on what the characters are doing rather than what the characters are thinking/feeling. It’s like watching old Godzilla movies. When you watch those Godzilla movies, you hardly get to empathize with any of the human characters. There’s usually an underlying moral message of man’s relationship with nature, but that’s more subtle and instead the focus is on the action and the carnage caused by the monster(s). I think Zombie Airmen is kind of like that.

The narration is good for this type of story and this setting. If I could make one suggestion, it would be that the narrator take slightly longer pauses after each sentence -it would have been easier for me to absorb what he was saying.

I'm a huge fan of the zombie apocalypse genre. This was a great example of it. I liked the author's take on it. The narration is pretty good, as well. All in all, this was a great listen and I hope there is more in this series.

I really enjoyed this book, it had a very unusual premise that I've not come across before. I loved that the some of the zombies had a point of view, and not all were the enemy! I'm definately looking forward to starting book 2.