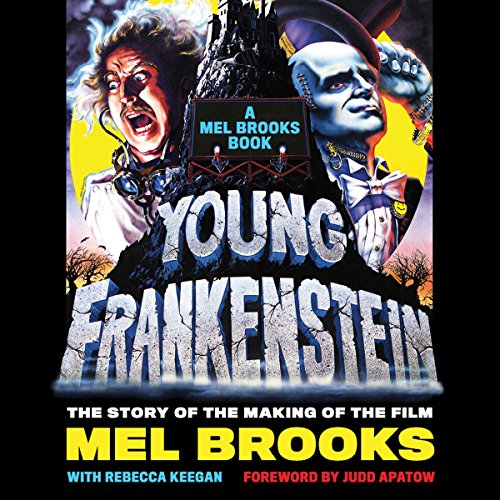 Mel Brooks' own words telling all about the players, the filming, and studio antics during the production of this great comedy classic. The audiobook is alive and teeming with hundreds of photos, original interviews, and hilarious commentary. Young Frankenstein was made with deep respect for the craft and history of cinema-and for the power of a good schwanzstucker joke. This picture-driven audiobook, written by one of the greatest comedy geniuses of all time, takes listeners inside the classic film's marvelous creation story via never-before-seen black and white and color photography from the set and contemporary interviews with the cast and crew, most notably, legendary writer-director Mel Brooks. With access to more than 225 behind-the-scenes photos and production stills, and with captions written by Brooks, this audiobook will also rely on interviews with gifted director of photography Gerald Hirschfeld, Academy Award-winning actress Cloris Leachman, and veteran producer Michael Gruskoff.

Mel Brooks is an American film director, screenwriter, comedian, actor, producer, composer, and songwriter. Brooks is best known as a creator of broad film farces and comic parodies including The Producers, The Twelve Chairs, Blazing Saddles, Young Frankenstein, Silent Movie, High Anxiety, History of the World, Part I, Spaceballs and Robin Hood: Men in Tights. More recently, he had a smash hit on Broadway with the musical adaptation of his first film, The Producers. An EGOT winner, he received a Kennedy Center Honor in 2009, the 41st AFI Life Achievement Award in June 2013, and a British Film Institute Fellowship in March 2015. Three of Brooks' classics have appeared on AFI's 100 Years...100 Laughs list. Blazing Saddles at number 6, The Producers at number 11, and Young Frankenstein at number 13.

Judd Apatow is one of the most important comic minds of his generation. He wrote and directed the films The 40-Year-Old Virgin (co-written with Steve Carell), Knocked Up, Funny People, and This Is 40, and his producing credits include Superbad, Bridesmaids, and Anchorman. Apatow is the executive producer of HBO's Girls.

What listeners say about Young Frankenstein: A Mel Brooks Book

Awfully fun book, but it ends too soon. The making of the Princess Bride movie book was much better.

A great behind the scenes look at Young Frankenste

it doesn't hurt that Young Frankenstein is my favorite Mel Brooks movie and my favorite Gene Wilder movie, so it was easy to enjoy this book.

Heading about how the film was conceived, produced, and cast was interesting and fun to learn about.

There were lots of cast interviews, although the interviews were read by the same male and female narrations, which was only strange when I knew I was supposed to be listening to Gene Wilder, but it was someone else reading on his behalf, obviously. And that was fine, it just took some getting used to.

Wish I Could Have Been There


We smiled, laughed, giggled, and even guffawed. This little gem is short, but it contains some great insights and behind the scenes info that lets you feel like you're in on the jokes -- "Werewolf!" "Where wolf?" "There, wolf." "Werewolf." I remember sitting in the theater when this movie was released and laughing until my drink spurted out my nose. The jokes weren't elaborate, or particularly clever, but the delivery? Dead on. Brooks and Wilder stayed true to the original concept and gave us a movie that dares you not to laugh.

A few people and cast members tell their favorite lines from the movie and I agreed with each one, until the next one told their favorite line. (Not all of the voices are the actual person since many of those involved have died.) I loved hearing Brooks voice narrate. Just his voice cracks me up. The camaraderie between the cast, as shared by a few of the people involved with the filming, shined through on the screen. Brooks tells how behind the scenes, the respect each actor, writer, etc, had for each other infused the entire cast and added that rare esprit de corps you feel when watching this movie -- which we immediately did. I swear I thought I saw the camera jiggle a few times...and thought of the stage hands shoving the handkerchiefs Brooks bought them in their mouths so the laughter wouldn't come through onto the soundtrack.

It's not EXTREMELY insightful -- it's only a little under 2 hrs. It's like sitting at lunch with Brooks and having him share the experience of working with these gifted comedians. It's dessert. Madeline Kahn is straight-faced and hilarious (I miss her and laugh every time I think of her singing, "Yes, no no no no no no; Yes no no no no no no" in History of the World Part I). There's some funny bits on Marty Feldman's Igor with that hump and Cloris Leachman's Frau Blücher (*horse whinny*), one of her scenes with gene Wilder had to be shot 14 times because he kept busting up. It's a great fun blooper reel of a listen.

If you love Mel Brooks, than you need to listen!

Mel Brooks describes all the background information around the making of Young Frankenstein. He brings all the actors to life with his wonderful voice.......
He also describes how fun it was to work with all the actors in the film......

I really would have liked to see the scenes on the
'Enclosed" pdf. Is technology available to include such things with audiobooks?

Mel Brooks is in many ways a genius when it comes to his visions and his talents when it comes to his movie making. In this case the making of young Frankenstein and the creative way an old tale was done to bring humor and light during a time when in many ways the innocence of movie making and it,s stars can't be reproduced. This was a time when u could take a chance and shoot the dice to see if u could land a home run. One of the best parts of this book is the fact that Mel himself Makes it special

Dislikes: Some ineffective attempts by other narrators to impersonate actors and scenes, even though actual audio clips from the movie were used; book ended too soon ( wanted to hear more. I suppose this could be considered a good thing, also); the list of movie credits for each actor breaks the continuity and flow of the book.

Great book for fans of one of the funniest and brilliant humorists of all time.

The Movie, the Myth, the Legend

If you loved this movie over the years, you want to know the backstory. Here it is!