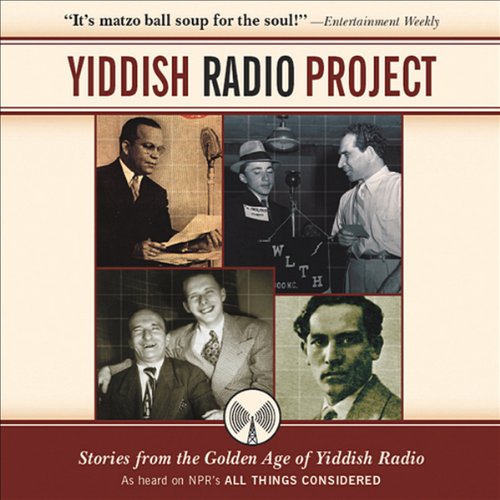 From the 1930s to '50s, Yiddish radio was popular from coast to coast. By 1985, it was all but forgotten. Then musician and historian Henry Sapoznik discovered a few dozen acetate-coated aluminum discs at a rummage sale. He tracked down a special turntable, put on the first disc and heard:

Sapoznik spent the next seventeen years searching for more surviving discs. Most had been melted down during WWII scrap-metal drives, others had disintegrated, but he found over a thousand, in attics, storerooms, even dumpsters. Each fragile artifact was a one-of-a-kind window into Jewish immigrant culture during the first half of the 20th century. Searing dramas, swinging music, news programs, advice and game shows, man-on-the-street interviews, commercials, and shtick leaped to life after decades of silence.

Lovingly restored, with translations performed by a cast including Carl Reiner, Eli Wallach, and Yiddish stars, the Yiddish Radio Project is a journey through time to a lost world that is intimate, passionate, raucous and utterly fascinating.

"Remarkable...like recovering a few blocks from the pyramids." (Philadelphia Inquirer)
"It's matzo ball soup for the soul!" (Entertainment Weekly)

You haven't heard this kind of talk in 20 years

Do you remember the hit song Joe & Paul's?
The Barry Sisters?
The Yiddish Philosopher?
Charles A. Levine, the 1st airline passenger to cross the Atlantic?
If you do you'll love this collection, if not you'll probally like it anyway.
Guest voices Jerry Stiller, Christopher Lloyd, & Eli Wallack, just to name a few.

Stories of people who won fortune and fame and those who's lives were ruined because of there fame.

What do you have to lose?
I should sit here in the dark until you change the light bulb?
Try it you'll like it!

THIS IS A FASCINATING PIECE OF HISTORY

This is a very touching and relevant show. It gives a glimpse into the immigrant life that is truly captivating. i enjoyed the connection with times long gone. maybe it could have been a half hour less. but its a great recording.

This could have been much more than it is, but even so, it is a fun way to spend a few hours.

It consists of clips from old radio shows that featured Yiddish speaking entertainers (in both Yiddish and English), mostly from the New York metropolitan area. It is a visit to a nostalgic place that has mostly vanished, but which gave rise to two generations of Jewish entertainers.

I Laughed, I Cried, I Kvelled

Here is a new world, a world that I had never known about before I had heard of this project. Here is Yiddish radio in America. Here is Eastern European Jewish New York. Here are stations whose power was so low that they could not be heard outside of the neighborhood. Here is a popular song that became a worldwide hit for many performers that the composer sold for $30. Here are commercials and jingles caught in the consciousness of tens of thousands of people. Here is the Shoah. Here is rabbinic court radio. Here is gut-wrenching drama. Here is avant-garde poetry and socialism, wealth and poverty. Here is a new thing under the sun, yet familiar as the ancient scriptures of most American faiths. Most highly recommended.

This was a great find! Here is true magic where first generation American Jews find their way in the USA, especially in NYC!.

This provided a virtual reality experience of the world in which my father grew up. He came to the US at age 11 from a shtetl in Belarus in 1921. During my life I just heard faint whispers from that world. Whispers used for communication I was not to understand and from which I slowly learned a few words in Yiddish. I don't remember enough to understand much of the program, but the overlays by Yiddish speaking celebrities made it both easy and fun to follow. I highly recommend this program to anyone whose life
experience in any way overlaps mine.

Scott Simon, as any NPR listener knows, is an intelligent, articulate guy. Unfortunately, he apparently fails to realize that almost no one cares about Yiddish Radio. I, and I'm confident, many other listeners tuned out this program when it ran on NPR. Public radio content should be eclectic, but should meet some standard for potential listener interest. New York is not the whole world despite the confusion of many New Yorkers.