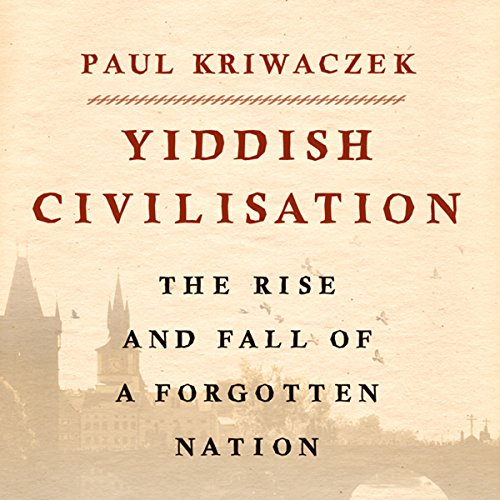 Yiddish Civilisation: The Rise and Fall of a Forgotten Nation

By: Paul Kriwaczek
Narrated by: Robert Blumenfeld
Try for $0.00

Tracing Yiddish civilization from its roots in the Diaspora to the present, Paul Kriwaczek combines intimate family anecdote, travelogue, historical research, and interviews with scholars to give us a rich portrait of a nearly extinguished culture as it survived across the centuries. He begins his chronicle in Jerusalem, with the destruction of the Jewish temple at the hands of the Romans in the year 70. We see the burgeoning exile population disperse, moving outward and northward throughout the following centuries, making their mark in more far flung cities under Roman rule. As these communities settle and coalesce, a self-governing Yiddish world takes root, spreading from the Rhineland and Bavaria to Western Russia and the Ukraine. By its late-medieval heyday, this economically successful, intellectually adventurous, and largely self-ruling Yiddish society is a presence from the Baltic to the Black Sea. Kriwaczek reflects upon the development of Yiddish language, occupations, social life, art, music, and literature, and introduces us to notable diplomats, artists, and thinkers. He chronicles the slow decline of Yiddish culture in Europe and Russia, beginning in the 17th century with the Chmielnicki Massacres in the Ukraine and culminating in the Holocaust, and looks further to fresh offshoots in the New World, ultimately celebrating what remains of Yiddish culture in our own time.

"Both highly readable and coherent." ( Tucson Citizen)
"Fascinating....Evocative and precise....An enjoyable narrative that captures the intricacies of a very complicated history." ( Publishers Weekly)

What listeners say about Yiddish Civilisation: The Rise and Fall of a Forgotten Nation

I was quite disappointed by this book. Paul Kriwaczek attempts to give a very broad history of northern European and eventually Yiddish speaking Jews from Roman times to the early twentieth centuries. Instead of creating a compelling and conclusive history however, his book comes off as a series of essays reflecting on Jewish life in Europe in more or less chronological order. Some chapters focus on a specific person, another on a series of events. Never does he successfully define what Yiddish civilization or the Yiddish nation is. He is often broad and vague. It was written well enough to make it a smooth listen/read and I did learn some new things. The idea of a Yiddish civilization is a great concept worthy of a conclusive history, sadly this book just isn’t it, but hopefully it will inspire others to continue adding to the literature of Yiddish history.

Probably better as an audiobook

I think I would have found it tough to reach the end of the print edition, as the author gives himself great license to pursue many avenues of this history at considerable length. As an audiobook though I found it really enjoyable, and I feel a sense of gratitude to know so much more about my ancestry. The very beginning and very end of the book struck me as a bit contrived, like the author had a hard time putting handles on such a massive swath of history, but all in all it’s an amazing accomplishment of a book, and you can tell how much fun the author had in writing it.