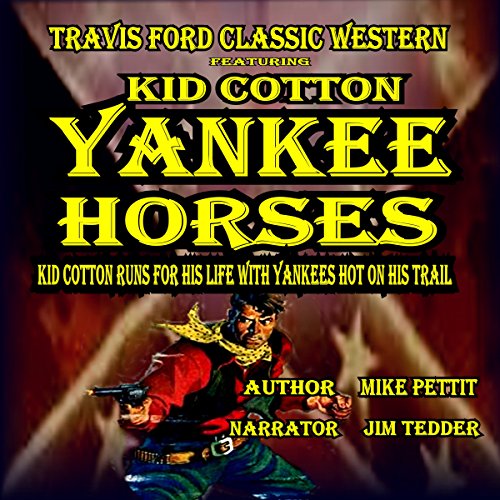 In years to come, Yankee Horses will be thought of as one of the finest post-Civil War stories told. All the hardship and turmoil, the uprooting of families, the complete devastation of the south, and the push west to find a new beginning had the South on the move. It was a time of greedy men from the north feeding off the vanquished, the freed slaves confused and not understanding where they fit in, and the white southerners shamed and humiliated in their loss to a more powerful adversary. Stormy winds blew across the land carrying change, distrust, and suspicion.

Kid Cotton is caught up in the change, but not the change he was expecting. He is sentenced to 10 years at hard labor in Louisiana’s notorious Camp 3 for attempted bank robbery. Camp 3 is deep in the Atchafalaya Swamp where no one has ever gotten out alive. After two years under the whip, he escapes with two other convicts and heads for Texas. Their plan is to join up with Travis Ford in Fort Worth and then to Mexico where rumor has it General Shelby has an army of diehard confederate soldiers ready to carry on with the war against the Yankees. Kid’s journey across Louisiana and Texas is jam-packed with danger and hardship. He and his friends take on Union soldiers, carpetbaggers, robbers, thieves, sheriffs, Texas Rangers… there’s trouble at every fork in the road. The ultimate challenge is a renegade Comanche named Black Dog. Kid and Black Dog have a running fight back and forth across Central Texas. A fight where only one will walk away from, or maybe crawl away from.