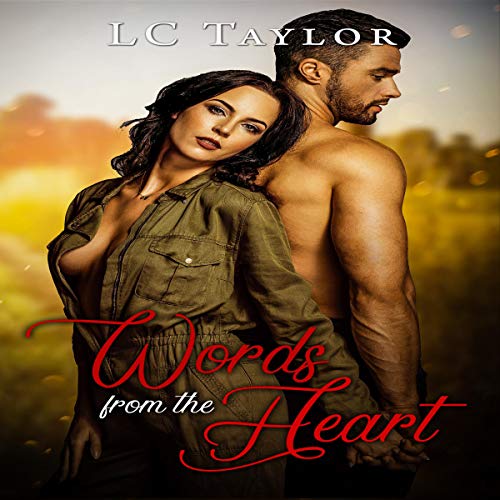 Words from the Heart

By: LC Taylor
Narrated by: Daniel James Lewis
Try for $0.00

Sometimes, life falls apart when you least expect it. The man she was supposed to marry is a liar. Her career is a joke and going nowhere. And now, the one person who loved her unconditionally is dead.

Delilah Greyson doesn't know who she is anymore. When she got the call that her grandmother Momma Belle was dead, a piece of her died, too.

She left her childhood home in Alabama for greener pastures, only to find it wasn't so green, after all. Now lost and broken, she finds herself back home in Alabama wondering who she is.

Delilah finds a mysterious wooden box containing letters - letters her grandmother wrote to her but never sent. Confused and unsure, Delilah begins to read the letters, uncovering secrets Momma Belle kept. Secrets so shocking, Delilah will question everything the thought she knew.

And as if she needed any other distractions, Parker, the sexy-as-sin man who worked for her grandmother, is getting under her skin. She can’t deny the attraction, but her guilt and shame from her broken engagement keep her from giving in to her feelings for him. Feelings she doesn’t quite understand.

Parker is a patient man. He doesn’t do relationships. But all the stories Momma Belle told him about Delilah had him wondering if she was the one he had been waiting for. And after meeting her...he knows she's the one.

Mature listener warning: This book contains a lot of panty-dropping sexiness! There is raw sexual language (a.k.a dirty talk), a little violence, and tons of heat! It is intended for listeners 18+ and fans of the naughty stuff. If that's you, then be sure to check it out!

What listeners say about Words from the Heart

What an amazing wonderful audiobook. This story was very much life like. The characters are fabulous and loved this. I recommend this it’s a more then once listen. Narrator did a fantastic job also.

This book is sweet and steamy. It could use some editing work and the plot is pretty predictable. Think like a Hallmark movie, but with steamy breaks.

I also give the narration a 4 star rating. He does a pretty good job, speaks clearly, and does different voices for the different characters.

I really enjoyed this sweet and sexy love story with Delilah and Parker. After Delilah’s grandmother, Momma Belle, dies and leaves everything to her, and then she learns that her fiance is cheating on her, Delilah heads for Alabama in an effort to re-discover herself. Parker has been friends with Momma Belle for years, hearing stories of Delilah and falling for her more with every one, even though they never met. Through letters that Momma Belle left, for both Delilah and for Parker, we gain a peek into the years, and we learn about about how much of a tool Delilah’s ex fiance truly was. Delilah has to combat her heartbreak and her rush of feelings for Parker, while Parker has to be patient and wait for her to realize what’s in front of both of them. They have some steamy encounters, which adds to the appeal, as well. Overall, a sweet, heartfelt, and sexy love story. The narrator is pretty good, though his female voice has him trying too hard, and it can be a bit off putting. It doesn’t detract from the story, but it isn’t as natural as it could be.

Words from the Heart is a sweet story about loss and and love. The narrator does a great job drawing the listener into the story.

Loved this story! Sad when you lose someone you love! But nice when you meet someone to help with your loss! Narrator was good!

I loved this storyline as well as all the characters. Very romantic and charming!!
The narration was wonderful!
This is book 1 with an HEA.
I recommend this book/series.

The story was good for a quick romance but I have a hard time with certain male narrators who attempt to do women voices and it ruins the experience. It's a nice listen for romance though.

If you're after a quick and cheesy romance where not a huge amount happens then this is for you. it was an ok story, but the narration was awful, especially when he attempted female voices.