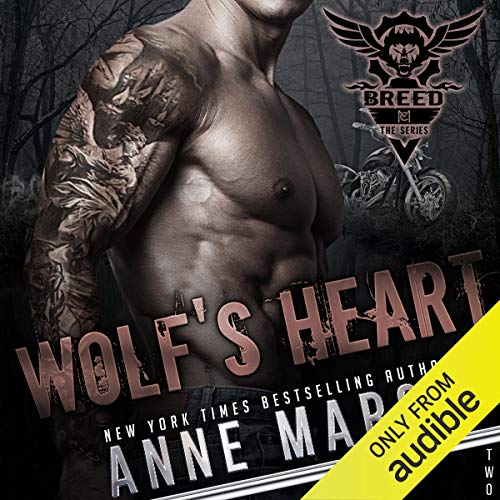 In a seductive new shape shifter romance from New York Times and USA Today best-selling author Anne Marsh, to take over a local pack Cajun werewolf Jace Jones must first take a mate...but she wants nothing to do with a big, bad biker who sometimes turns furry.

"'You don't have to do anything. I'm gonna take care of everything.' I mean it, too. While sinking my dick inside her tops my current wish list, I also intend to make this good for her. She's had a shit deal in life, and I absolutely want to kiss her better. The way I see it, all she has to do is enjoy. I'll do all the rest. I'm practically a Boy Scout and she can pin the medal to my goddamned chest later. First, I have my mate to kiss." - Jace Jones

To keep the peace between two rival wolf packs, Cajun werewolf Jace Jones agrees to become the alpha of The Breed pack and motorcycle club. There's just one catch: he needs to mate the former alpha's daughter and he's damned certain she hasn't chosen him. His new mate is sweet and sexy as sin, but she's also been brutalized by the pack and the last thing she needs is one more wolf in her life. But before he can take his place as leader of the Breed, he'll have to teach his woman her place...in the club, in his arms, and in his heart.

Werewolf bikers? Pass. Keelie Sue Berard has spent a lifetime trapped in the motorcycle club's misogynistic world, first as the alpha's daughter and then as a mate. She's kept her mouth shut and her head down trying to survive, so she'll do whatever it takes to walk away free to live her own life. But Jace terrifies her. He protects her. He owns her. And now he wants her.

What listeners say about Wolf's Heart

The story is based on a vulnerable girl who is physically abused by her father and then pimped out to be raped by men he knows will viciously hurt her - on the other hand the hero holds her captive and hits her when she try’s to escape and this is sold to the readers as sexy and ‘hot’. What a man, clearly she is so emotionally damaged from all the abuse she has no self respect left and thinks that’s love.

Not an entertaining listen for me at all.

My Ears Are Bleeding

The book itself was mediocre, more or less what I thought it would be. A little romance, a lot of sex. Some mindless entertainment to occupy me at work. I wouldn't recommend it with the narration it has, though.

Would you be willing to try another book from Anne Marsh? Why or why not?

I bought this as a deal, and I prefer a little more romance with the story, instead of so many sex scenes.

I don't usually review books, but this was hands-down the worse narration I've ever heard. The male voice was alright, nothing spectacular, but the female voice grated on my very last nerve. Looking at the other reviewers' ratings, I can't believe we listened to the same book. The southern accent may have been point-on, I don't know, but she sounded like she was trying too hard to sound sultry, always a half-whisper. The scratchiness of her voice made me think of an old woman. She reminded me of Sookie Stackhouse's grandmother in True Blood. It may have come across as a better book if my ears weren't bleeding so hard from the narration. I actually liked her rendition of the male voice better than the females.

Was Wolf's Heart worth the listening time?

I definitely recommend this audiobook. Both authors do a good job. It was short enough to not get boring and long enough to still have a good plot.

At first I wasn’t really sure about the narrator’s voices, then as I listened to the female narrator more I found her voice really engaging and interesting. The two of them together told a really great story. I wish there was more “story” to the story but it was short and sweet and good.

I can not take the narrator's or the context of this book serious. I thought this was a joke. Smh.

I'm sorry, but I couldn't pass chapter 2......the female narration was so awful. I am so sorry. I checked to see if she was the narrator for all the other titles in this series and she was, so unfortunately, I will have to pass.

OMG, this audible was outstanding, the performance was superb. It was an Awesome duet. She sounds Good as him and he sounds Good as her. If that was even what was going on. But, I've come to realize that the narrators can only be as good as the story that they read. So Thank You Anne Marsh for your incredible storytelling.

The male narrator did a good job

short little story, with not as much characterization as I normally go for. not a lot of development of the universe, which is fine. sometimes I felt like there were parts of the action that were articulated well enough. and I'd be surprised being like oh, this person's in the room? didn't realize. May have been an aspect of listening to the audiobook too.

Hot werewolves? Check. Bad boys in a motorcycle club? Check. Fun, spicy storyline? Kind of.
I liked the elements of the story and Jace was definitely hot, but Keelie Sue was a bit too helpless and the chemistry between the two wasn't really there. There were a couple good romantic scenes and the story is short so no boring parts, but I wanted more action, more romance, more bang! The narration didn't help, I thought the woman was too breathy and I didn't like her parts. Maybe book 2 will be better?

Story line great narrating not so much

Not great but I will give book 2 a chance

Too much sex and not enought character development. This book had great bones interesting characters and MC themes but I felt like there was random sex scenes just for the sake of it and yeah they were hot but I would have preferred more insight into the characters and side characters I even skipped some sex scenes so I could just get back to the story already! I will listen to book 2 in the hopes it is better than this one 🤞

This story is based in the Breeds MC, a wolf shifter club at that. Jace Jones is supposed to be there to get intel but things get complicated when he sees Keelie Sue Bernard and wants the beautiful little she wolf for his mate. It’s a really complicated situation because her father is the alpha of the club and a really bad one at that and when you combine that with the terrible experiences she’s had Jace is going to have his hands full convincing her to trust him and give them a try.