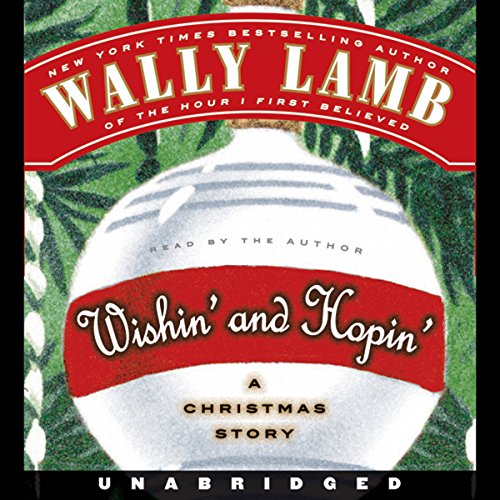 It's 1964 and 10-year-old Felix is sure of a few things: the birds and the bees are puzzling, television is magical, and this is one Christmas he'll never forget. LBJ and Lady Bird are in the White House, Meet the Beatles is on everyone's turntable, and Felix Funicello (distant cousin of the iconic Annette!) is doing his best to navigate fifth grade - easier said than done when scary movies still give you nightmares and you bear a striking resemblance to a certain adorable cartoon boy.

Back in his beloved fictional town of Three Rivers, Connecticut, with a new cast of endearing characters, Wally Lamb takes his listeners straight into the halls of St. Aloysius Gonzaga Parochial School - where Mother Filomina's word is law and goody-two-shoes Rosalie Twerski is sure to be minding everyone's business.

But grammar and arithmetic move to the back burner this holiday season with the sudden arrivals of substitute teacher Madame Frechette, straight from Québec, and feisty Russian student Zhenya Kapakova. While Felix learns the meaning of French kissing, cultural misunderstanding, and tableaux vivants, Wishin' and Hopin' barrels toward one outrageous Christmas.

From the Funicello family's bus-station lunch counter to the elementary school playground (with an uproarious stop at the Pillsbury Bake-Off), Wishin' and Hopin' is a vivid slice of 1960s life, a wise and witty holiday tale that celebrates where we've been - and how far we've come.

"Charming....Full of pop-culture references of the day. This will have broad appeal." ( Library Journal)

What listeners say about Wishin' and Hopin'

I've read several novels by Wally Lamb, and while I loved them, they were more serious and heavy in theme and presentation. This was such a delightful surprise. It simply demonstrates how versatile a writer Lamb is.

I guess this is a combination coming of age and Christmas comedy. Felix Funicello, who is distantly related to Annette Funicello--of Mickey Mouse, etc, fame, is still a bit of an innocent when the story takes place. His peers are beginning to get a bit more informed and sophisticated, so part of the amusement comes from realizing we were all, at some point in our lives, caught between being in the know, and sort of out of it at the same time. Felix attempts to act as though he understands things still a bit over his head, while often not really getting all the innuendoes of things said around him. But the plot is so funny! When the nun who is his teacher has a nervous breakdown in class, she is replaced by a sexy French-speaking lay teacher in a catholic school in the 60's, and the scene is set for lots of laughing. The end of the book is just laugh out loud hilarious.

The narration was pitch perfect, the story was great, so don't be put off by the short length of the book. Worth every bit of the credit, and then some! I loved it!

I was pleasantly surprised by this little book...I haven't read any of Wally Lamb's others. Since I grew up in the same time and vicinity as the narrator, this book rang so true to me. Nothing like growing up Catholic!

I have listened to this twice and bought a copy for my mom and aunt to read because found it so funny. I can't listen to it in public-- people look at me like I'm crazy because I laugh out loud. I love Felix and this great Christmas story!

This is truly a fun and nostalgic look back at 1964 with a parochial school and it's preparations for Christmas through the eyes of a fifth grader, Felix Funicello. The descriptions of the school pageant makes this book a complete winner in and of itself!!

Felix is the narrator in this cleverly written look at life through the eyes of a spunky, but not completely understanding boy who shares 'all' about his life at home and at school. He's also a distant cousin of Disney's early icon, Anette Funicello, which plays well into the story too!

Every character adds to the poienency and hilarity of this coming of age story. From the modern Quebec 'French' substitute teacher for the mentally disturbed nun, to the new Russian girl who competes with the classes' 'little Miss Suck-up', to the sexually advanced boy, to Felix's family who are so completely nostalgic of every small 1960's family, this book will remind every reader of the 'good old days'.

Even the 'expected' epilogue is tremendous for it's look at how people grow and change!! A thoroughly enjoyable book that I'm very glad I read!!

This book was the best ever Christmas Story. Felix is one to just love. Laughed out loud!

Are you sure this didn't happen at St. Xavier's in Spokane Washington? I relived so many moments of my childhood through this wonderful story that I found myself stopping and wondering if this guy was a classmate of mine! Anyone who attended a parochial school in the 60s MUST buy this book ~ especially during the holiday season! Wally Lamb not only wrote an amazing book, he narrates it to perfection. Thank you for giving me 4 hours of pure joy!

A fun way to reminisce

If you went to Catholic elementary school in the 50’s s or early 60’s you will find this a fun read.

Wishin’ and Hopin’ is a heart-warming and frequently hilarious story of 10-year-old Felix Funicello’s Christmas of 1964. Wally Lamb’s narration is flawless and having grown up in Connecticut, I appreciated his natural accent which any actor would most likely have turned into a less subtle Rhode Island or Boston accent. This is a nostalgic tale falling somewhere between Jean Shepherd’s 1930 Christmas memories and David Sedaris’ Holidays on Ice. It is a perfect story to share with a loved one on a long car ride – guaranteed for good laughs and even some tears! It would be the perfect Christmas gift for any Baby Boomer on your shopping list!

Wishin there were more of this

What did you love best about Wishin' and Hopin'?

This book made me smile, and laugh and reminisce and imagine life in a simpler time. Excellent story, characters, narration. Just fabulous holiday fun!

What other book might you compare Wishin' and Hopin' to and why?

I want more books like this! Reminds me of A Christmas Story. The only book I am reminded of is Littlle Blog on the Prairie. It too was family friendly and a good escape.

I loved this. Am sending it to friends in place of a Christmas card! Isn't that a great idea!

Not what I was hoping for, but still good

Wally's first book stayed with me for many years, wished this would've been the same.